Pushing the Limits of Strength and Independence 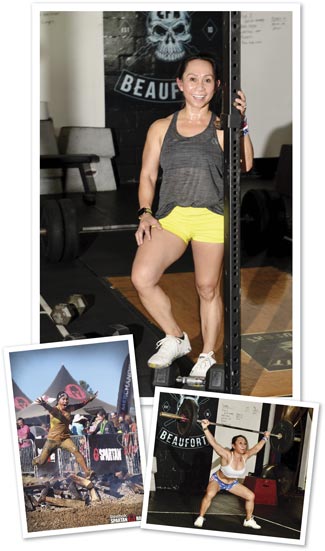 A petite, but powerful, young woman from the Philippines traveled across the globe to America at the age of 26 with grit and determination to make it in the U.S. “When I got off the plane in Michigan, all I had with me was a suitcase and a degree,” said Febie Knight. “I came on a work visa with a job lined up as a traveling physical therapist. I was alone, but I figured ‘no guts, no glory.’”

Thirteen years ago, Febie opened Ridgeland Physical Therapy & Sports Rehabilitation Clinic. The young woman who got off that plane is now a business owner with several employees, working in a profession she loves. “I came from a family background where we were physically active, especially my father. He always said to exercise every day because it reduces stress,” Febie said. “Now with my clients, I have good luck encouraging them to continue their exercises and to get active. Most come back for our wellness program. Many of them say ‘she’s so little and she’s older, so if she can do it, we can do more.’ We all have aches and pains, but stretching and doing the therapy keeps you physically fit and healthy. I motivate my clients to continue what they learn from me and remind them it’s important to listen to your body.”

In her own life, Febie practices what she preaches and then some. She’s studied karate, she snow skis, plays tennis, has competed in rollerblading, was a runner and did jazzercise. She describes herself as very competitive, and she loves to win. And win, she does.

Now she is a cross-fit junkie who can’t get enough. “I forget I’m in my 50’s as I try to compete with the young ones and keep up with them. I still have that competitive instinct in me,” Febie said. (She recently took third place in the Fitness of the Coast master’s division for all of South Carolina.) “Cross-fit is an intense workout that is judged on endurance, strength, performance (or making all correct movements) and speed of repetitions. For me it’s like a cult. I leave sore and can’t move, but I’m hooked!”

Her first cross-fit competition was the national Festivus Games in 2015. She took first place. Then she won the Master Tour in the 50-54 age group in 2016.

Her most challenging competition, however, was the Spartan Race Trifecta in 2014. Febie explained that it is both a mud race and obstacle course. In order to earn a medal you must compete three times within the year and finish three levels. Level 1 is a 3 to 5 mile course, Level 2 is an 8 mile course, and level 3 is 13 miles.

Febie traveled to a ski resort in Virginia for the first leg of the competition. “I was used to going up the mountain in a ski lift,” she said, “but now we had to go up the mountain and back down the mountain on foot, running in mud, climbing ropes, going through obstacles. We had to climb up and over a wall, crawl under barbed wire, and at the finish line, we had to be able to jump over a large fire. For that you have to be able to jump really high. I competed in this with my husband and son. It was really fun, except my husband broke a rib from a fall, but he finished. For me, the worst part of the day was getting all muddy, and at the end, getting hosed down with cold water,” she laughed. The Level 2 competition was in North Carolina, and Level 3 was held in Mississippi. Febie and her family completed the entire Trifecta.

She loves competing, and she loves her job—both give her a sense of accomplishment. “My only weakness is that I’ve got to have the last word!”

Up Close:
All in a name: Febie is an unusual name, one she says people remember because it is unique. So what does it mean?  Her mother simply wanted to give her a name that signified the month in which she was born: February.

The Family Tie that Binds: The bonds of family are strong within the Filipino culture. Febie said they will always continue to care for family, despite the barriers of distance and time.

Therapy for Life: The only job Febie has ever had is being a physical therapist. Before coming to America, she practiced for three years in the Philippines after earning her degree.

Stay Calm and Be Blessed: Febie believes in sharing her blessings, and more blessings will come for you if your home is calm and loving. So arguing and fighting is not a good thing.