No One Can Fill Her Shoes 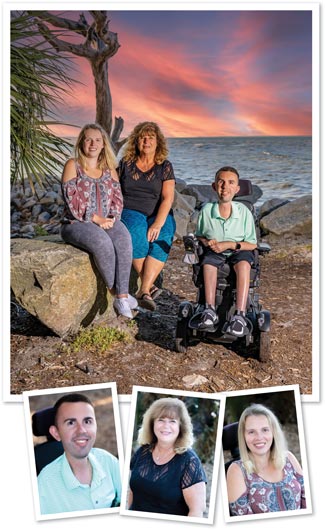 Dianne Bucklalew is the quintessential “Mama Bear,” and for good reason. She has two children—Garrett, 28, and Lexi, 26—who have Muscular Dystrophy (MD). Dianne may not be eight-feet tall, weigh 400 hundred pounds, or have sharp claws and teeth like a real bear, but it wouldn’t be a good idea to hurt or mistreat her children. For nearly three decades she has fiercely protected them and advocated for them. Muscular Dystrophy is a disease in which abnormal genes interfere with the production of proteins needed to form healthy muscle. This results in progressive weakness and loss of muscle mass. There is no cure.

Dianne is originally from Pittsburgh and has been married to her husband, Mark, for 32 years. When Garrett was born, doctors told her that he had ‘benign developmental delay,’ but it took more than three years to get the correct diagnosis of Muscular Dystrophy. Only two weeks after getting this diagnosis, Dianne realized she was pregnant. Nine months after Lexi was born she had worries about her, had her tested, and learned that she also had MD. To complicate matters even more, Lexi developed epilepsy and suffered 28 to 30 seizures a day throughout middle and high school. It took six doctors, three hospitals and six years to find the right medication. This fall will mark 10 years of being seizure-free for Lexi. Garrett and Lexi have been going to physical therapy since they were two years old. Dianne has been their primary caregiver, their medical advocate and their cheerleader.

Dianne said, “Mark and I wanted to make sure our kids could have fun and make good memories. Other children can play football or become cheerleaders. My kids can’t climb stairs or even pick things up. So we would enjoy boating, teach them to target shoot, and enjoy other things they could do. My kids are smart, and they may lack muscle, but they are respectful and they respect their elders. Others often tell me about my kids and make me proud. So many other kids are handed everything, they can do everything, and they are brats.”

Dianne has every reason to be proud of Garrett and Lexi. Garrett is a graduate of DeSales University and after 18 months of interviews, he landed a job at Spinnaker Resort in the owner services call center. Lexi is a Penn State graduate with a degree in business, marketing and management. She had 18 interviews before she was hired as an innovation and technology assistant for the Town of Hilton Head. She also manages social media for both a local restaurant and a contractor.

Garrett and Lexi said their mother fills multiple roles for them: nurse, taxi driver, life coach, teacher, therapist and much more. Garrett explained that he is 100 percent dependent and needs assistance with every activity of daily living, from combing his hair to being transferred onto a toilet. “If you ask, it’s already done,” he said. “She’s incredible, and it terrifies me that someday she won’t be able to lift me. No one can fill her shoes.”

Lexi said, “Mom has been there for everything. She never says no if we need help or if we need to talk. She always figures out a way to work things out. She’s Wonder Woman with two kids with a disability and she does the work of ten people. People know not to mess with her when talking about her kids.”

Lexi said that in elementary school it was like being a “normal kid” because she could walk and didn’t have to use a wheelchair. Things got worse in middle school when she needed a wheelchair. “Everyone looked at me differently, but in high school it got even worse. Nobody would talk to me. One time a girl in the cafeteria yelled, ‘Look, it’s the crippled, retarded penguin,’ because I wobble when I walk.” Lexi was so upset that she called her mother who insisted that the school review the security tapes to determine who the culprit was.

“After high school, I was looking forward to meeting new people and getting a fresh start at college where I hoped there would be no judgment. I just wanted to be included.” Her dorm had a troupe of ‘mean girls’ who slammed doors in her face, stole her wheelchair and ostracized her. Lexi’s motorized chair needed repairs so she was using a manual chair. One of the girls took control of the chair and at the top of a hill asked what would happen if she let go – and then she did. Lexi was terrified as she rolled down the hill, and thankfully, a young man caught her before she crashed. Dianne was called and immediately drove to the college. The school recommended mediation. Lexi said, “Mom was angry but maintained her composure. She had me moved out of that dorm right away.”

Both siblings agree on one thing: “There’s nobody who could have cared for us like her, who gave us such support,” Garrett said. “We are incredibly lucky to have somebody like her in our lives. Mom is a rock.”