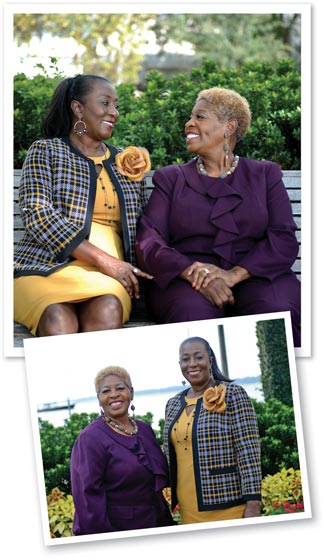 Andrew Carnegie stated: “Teamwork is the ability to work together toward a common vision. It is the fuel that allows common people to attain uncommon results.” This description of teamwork is what drives Carrie B. Lynard Major and Isabella S. (White) Runnels, whose paths crossed 37 years ago, both in their long friendship and service projects.

In 1985, Carrie established a non-profit organization, Carae’s Lowcountry Modeling, and Isabella was highly recommended as a potential board member. They immediately gravitated towards each other, realizing their purpose and goals are to serve.

Both ladies are well-known in Beaufort for Carae’s Lowcountry Modeling, which allows young people to improve their self-image, enhance public presentation and learn skills in self-motivation, decision making and goal setting.

In addition, Carrie and Isabella also serve as co-chairs of the Annual Beaufort County Youth Conference, which has been in existence for 30 years. It’s a day-long Saturday event, designed by teens, for teens to encourage and empower youth to make healthy choices and decisions. Through the years, these events have touched the lives of approximately 6,500 youth and young adults.

Carrie recalled a devastating tragedy early in her life that damaged her self-esteem, caused depression and placed her on a path of gloom and doom. Her godmother, Geneva White, said these life-saving words to her: “Carrie, this is not the end of the world.”

Those words were the lifeline that rescued a drowning teenager. She yearned to establish a program designed to boost self-confidence and build self-esteem in teens and young adults. She wanted those needing self-assurance to have a platform to grow and excel in life. She desired to make the difference for others, as her godmother had done for her. Her vision was to create an organization featuring fashion presentations, and experience feelings of pride, success and accomplishment.

In 1984, she shared her dream with co-worker, Scott Gibbs. He listened and responded: “Go for it!” Additionally, he pledged his support and was right by her side every step of the way. She developed a sketch of her organizational plans, named it Lowcountry Modeling, established a board of directors, (including her new friend Isabella), and applied for 501c3 status.

In 1985, Carae’s launched its first fashion presentation production, held in the Beaufort Naval Hospital’s auditorium. It was called, “The Spirit of Christmas, A Fashion Play,” and debuted 26 models—all ages, even as young as 3 years old. It was extremely successful and grew to a twice-a-year event for several consecutive years. The primary focus of Carae’s fashion presentations were to give individuals a catwalk to enhance, rebuild and mend broken places, restore confidence, shed doubts, smash stigmas, experience hope and wholeness and to develop the boldness to live life to its fullest in every aspect.

Isabella was delighted to be a part of this initial constructive movement. Since then, the relationship between her and Carrie has grown far beyond their activities as members of Carae’s Board; they are inseparable, genuine friends.

Isabella graduated from the last graduating class of St. Helena High School and also from Voorhees College in Denmark, SC. Later, she earned a degree in social work from the University of SC. At age 50, she earned a master’s degree in education from Boston University Wheelock College of Education and Human Development.

After graduating from Voorhees, she remembers well, as a young person, being hired for her first job by the revered Frieda Mitchell. Her position was Director of the Sheldon Day Care Center. Advancing her career, she held positions with Beaufort County Alcohol and Drug Abuse Department, Comprehensive Health Services, Juvenile Justice Department and Department of Social Services. Her final 36 years were with the Beaufort County School District as a social worker.

Carrie attended local schools and graduated from Beaufort High School in 1971 when it was first integrated. Many years later, as a wife and mother of two, she wanted to pursue a higher education, and enrolled at the University of South Carolina Beaufort. Carrie was determined to earn a college degree despite many obstacles. In 1978, she earned an associates degree. In 1992, after 14 years, Carrie earned her Bachelor of Science degree from Park University. Additionally, she earned a master’s degree in counseling from Webster University in 2002, while working a full-time job and bearing her responsibilities of being a wife and mother of five.

Her career started as a grocery store cashier, a bank teller, and a food stamp filing clerk at DSS. Later she became a case worker with the AFDC Program and the Teen Companion Program Coordinator, both at DSS. Other positions she held with Beaufort County were school social worker and mental health and substance abuse counselor.

When asked how they keep their friendship close with so many activities and demands on their time, they replied, “It’s easy!” They love doing projects together that serve and help others; the past 37 years are living proof! They share the same faith and beliefs. Both are passionate about youth and positively influencing them in grasping their highest potential. Their love and devotion to God, family, friends and the community are apparent in their everyday living. These two friends truly share common goals—hearts for service— that over the last 37 years have manifested remarkable, uncommon results.

Up Close:
Isabella is married, has two adult children and two incredible granddaughters. She is an active member of the Friendship Baptist Church on Coosaw Island, SC.

Carrie is a minister at Bethesda Christian Fellowship on St. Helena Island. With her husband of 51 years, Frank, they have five children, 16 grandchildren and 11 great grandchildren.