Love When You Least Expect It 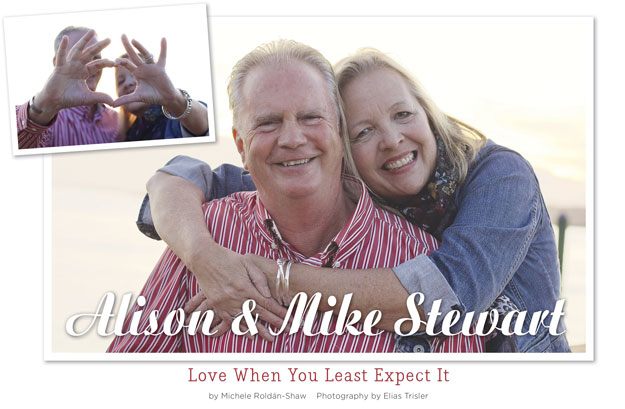 Alison was a divorcee, an Ohio girl who’d been on Hilton Head for the better part of 20 years. She tried to date a little, but priority was on raising her three kids and her career. She’d reached a stage in life where she felt comfortable being alone, had a lot of friends, and for the most part said, “I’m good.”

Mike was also a father of three, but after divorcing in Louisville, KY, he came to Hilton Head to help his brother and sister-in-law at their restaurant, The Sunrise Café. He spent the next three years heads-down working, until folks started to say he should get back out and meet people. He got on Match.com but didn’t feel too comfortable with it.

Then came the evening of November 18, 2016, when these two strangers would cross paths at The Beach House on Hilton Head. Alison was poolside with a girlfriend when Mike walked past, looking like a “tall drink of water,” in the words of the friend, who boldly called out asking if he was single and wanted to sit with them. “She has a sixth sense like that,” said Alison.

“It was so comfortable immediately,” recalled Alison, who is managing director of operations for a private health consulting firm. “He put his hand on my leg—not inappropriately, but just so gentle—and it felt like we’d been together for years.”

For his part, Mike felt equally natural. “When I looked at Alison it was love at first sight,” he said. “Once we started talking it just clicked. It was a meant-to-be evening.”

Mike and Alison discovered they had almost everything in common: work and parenting styles, financial goals, how they like to vacation, love of golf and a playfully competitive spirit. Both have two boys and one girl, but the fact that their kids are grown means they can focus on keeping life “simple and easy.” The big things couples normally fight about—sex, money, family—were complete non-issues from the start. A year-and-a-half later, Mike proposed, and they were married the following November 18, exactly two years after they met. Now they celebrate their anniversary on the 18th of every month, which they jokingly say is because they’re trying to get to 50.

“We’re too old to be someone we’re not,” said Mike, who does grounds maintenance at Sea Pines Country Club, and sets up a mimosa/bloody Mary bar on Sunday mornings at Sunrise Café. “…so we’re just going to take each other as we are.”

That means navigating the rare instances when they are not automatically on the same page, which they do with open communication and a lot of mutual respect.

“The other day we had a little fight,” said Alison, “and afterwards I was like wow, that was a good one, we got a lot accomplished! Everybody’s so different in how they approach what’s important to them, so the key for Mike and I is understanding what makes each other tick. I think this is the first time in a relationship I’ve truly been myself, and that makes it safe.”

Having settled in like hand-and-glove, Mike and Alison prove it’s never too late to find love again. “There are a lot of people our age who are still looking for someone to share their life with and have been very discouraged,” said Alison. “So one comment we get a lot from our single friends is: ‘You give me hope that there’s still someone out there for me.’”

What they DON’T agree on: spicy food (he likes it, she doesn’t) and sports teams (he’s a Kentucky fan, she likes Ohio State and the Browns)

Advice to singles: “The most important person you need to love and take care of is yourself. I love Mike, and we are so blended, but I don’t fear being alone.”