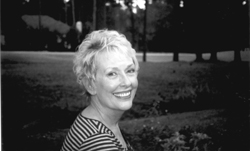 We all have it... we've been told; it's simply a matter of tuning into it. Often it is called our sixth sense, and if we are quiet enough and listen, we may just discover it.
Gail Twisdale is in tune! The teacher's sixth sense, psychic insight or, as her close friends call it: "Gail's spooky business" has given her knowledge and clues to her life on more than one occasion.
A New Yorker turned Southern Belle, Gail moved about the South. After her marriage, she settled in Asheville, NC in 1969, where she began her career teaching first and second grade. It was there that one of her "spooky" incidents occurred.
"Each night as I was going to bed, I noticed the clock consistently reflected 11:11 p.m. Finally, I consciously moved my bedtime earlier or later, puzzled why I kept seeing the same time repeated," she said. "Then I had a strange dream involving me bathing four babies. They were scrambling about and pushing each other and suddenly one went under. I scooped him up and was able to revive him. While I was helping him, the second one disappeared beneath the water, and when I finally got hold of him, I realized he was gone. I sobbed and sobbed, but when I lifted him up toward heaven, I saw the smile on his little face, and I felt he had seen God's face."
"The dream not only puzzled me but deeply saddened me, and often times I cried over it. Gail continued, "One May, my husband and I visited Hilton Head and had a lovely time, but when we returned home, I had another strange vision and called my dear friend, Barbara DeLeo, to tell her. It was as if a curtain dropped suddenly between my husband and me. I told her it was finished, and when she asked me 'What is?' I couldn't answer, as I didn't know," she said.
"That July, when I returned home one evening, Jim's daughter greeted me frantically saying Jim would not wake up. Calling 9-1-1, I rushed to him and found him cold to my touch; but there was a smile on his face. As I left the room to call his brother, I glanced at the clock...11:11 p.m."
Gail returned to her friend's home on Hilton Head Island to grieve and sort things out. "I had alone time. I walked on the beach and cried and cried, and wrote in my journal," she said. "Finally, something inside signaled I was going to be okay. I feel we must learn a lesson from everything that happens to us. We have to step back and look at the situation to discover what it is we should take from each experience."
In May, 1987, Gail moved to Hilton Head Island. In 1990, she renewed her teaching certificate and continued to teach first and second graders as she had done since 1969. In her classrooms at Hilton Head Elementary, her familiar slogan was well known: "Never say you can't in my class, because you always can if you work at it!"
Before moving to the island, on one of her visits to Hilton Head, Gail met longtime bachelor, Andy Twisdale. "We got to know each other through letters and long distance phone conversations. I think Andy really learned what I was about, as I poured my heart out in letters to him," said Gail.
Her husband of nineteen years now says, "She was wearing pink the first time we met at Hudson's. I remember where she was sitting and eating oysters. I loved her wonderful smile! She is such an amazing woman, so caring and giving, and she has an unbelievable way with children. I've seen her gather them comfortably to her and talk with them anywhere in the world!"
Gail giggled happily, showing the photo of their 1988 wedding. "This bachelor told me he had waited forty years for me!" Their sparkling marriage still exudes the happiness of two people most grateful to have found one another.
In 2000, Gail decided it was time for a change. "We're in the trenches day after day. I'd come home each night wondering if I had handled the day properly... if I had hurt any feelings or said the right thing when needed. I asked to be trained in the Reader Recovery Program and was enjoying working one-on-one with the students when we were struck a huge blow in 2001. I was informed on the phone that the lump I had discovered was stage three cancer and required immediate surgery, chemo and radiation. I told Andy I had no intention of dying of breast cancer. I was fortunate enough to meet all the criteria for a clinical testing program at Duke, and it was amazing."
Andy reflects, "The cancer brought us closer together, and we cherish each day. The Twisdales shared a few tips from their happy marriage. "There is no television in our bedroom. We either read or cuddle. We pray before each meal, and, oh yes, our couch time. We sit together and discuss our day, and on the rare times we disagree, it's over quickly, for life is too short!"
Gail, who was Teacher of the Year and Educator of the Year in 2004-05 continues to inspire young students who may never have had the chance to learn to read. "It's so rewarding to see their progress," said Gail, who feels parents should begin reading to their children at birth ("It's proven to increase their intelligence").
About his bride, who admitted to being a shy child, Andy proclaims, "Gail is so global and sees things as no one else can. She is a special, insightful person who has a genuine love for people.