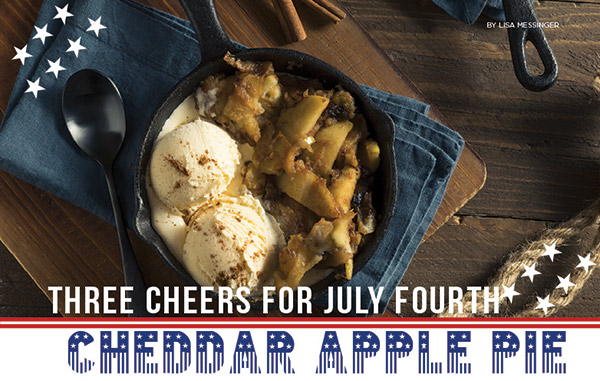 Judith Fertig spent years creating and compiling the greatest the United States had to offer when writing her what is now already classic cookbook, All-American Desserts: 400 Star-Spangled, Razzle-Dazzle Recipes for America’s Best Loved Desserts. However, one of her favorites is an old English twist on an American favorite: cheddar cheese accenting apple pie.

It’s been a favorite in New England and the Midwest for centuries, but as Fertig notes, it stems from England, which is known for both its apples and its cheddar. Fertig prefers Wisconsin-aged cheese atop her patriotic version. In the very easy dessert that follows, she crumbles it in a topping along with flour, butter and sugar.

Thanks to Fertig’s research and special touches, her cheddar-topped apple pie has become my favorite Independence Day dessert.

Their next step is either adding shredded cheddar to melt atop within a traditional streusel or right in the crust—a similar crust is in the tasty recipe (right) from Joy of Cooking: All About Pies and Tarts.

Combine cheddar cheese, flour and the cold butter. Chop mixture with a pastry blender to the consistency of coarse crumbs, then press together with your fingers and knead in the bowl until a cohesive dough forms. Flatten the dough into a 4-inch disk, wrap in plastic and refrigerate until firm but malleable, 30 to 60 minutes. Flour the dough lightly, then roll into a 9-inch round between sheets of wax paper. Slip a rimless cookie sheet beneath the dough and refrigerate until firm, about 30 minutes.

Position a rack in the center of the oven. Preheat the oven to 375° F. Heat the room-temperature butter over high heat in a very wide skillet (not cast iron) until sizzling and fragrant. Add apples. Toss with a wooden spoon until the apples release their juice and are tender, 5 to 7 minutes; reduce heat if the apples begin to color. Stir in raisins, nuts, sugar, lemon zest, lemon juice, brandy, salt, nutmeg, cinnamon and cloves.

Boil over high heat, stirring occasionally, until the juices thicken to the consistency of maple syrup. Pour the mixture into a 9-inch pie pan. Peel the top sheet of wax paper off the dough, then flip the dough onto the filling and peel off the bottom sheet. Let the dough soften slightly, then tuck the edges inside the rim of the pan and cut two (2-inch) steam vents. Place the pie on a baking sheet and bake until the crust is golden brown and the filling is bubbly, 30 to 40 minutes. Let cool slightly before serving. The pie can be made up to 12 hours ahead and warmed in a 350° F oven to 10 to 15 minutes. Good served with vanilla ice cream. —Joy of Cooking: All About Pies and Tarts

Preheat oven to 400° F. To prepare filling: In a large mixing bowl, combine apples, sugar and cinnamon. Put the filling into a 9-inch pie pan.
To prepare topping: Mix flour, sugar, grated cheese and butter together with your fingers in a medium-size bowl until crumbly. Sprinkle this mixture evenly over the apple filling. Bake until browned and bubbling, 45 to 55 minutes. Let cool, then slice and serve with vanilla ice cream.
—All American Desserts: 400 Star-Spangled, Razzle-Dazzle Recipes for America’s Best Loved Desserts

Lisa Messinger is a first-place winner in food writing from the Association of Food Journalists and the author of seven food books, including “Mrs. Cubbison’s Best Stuffing Cookbook” and “The Sourdough Bread Bowl Cookbook.”