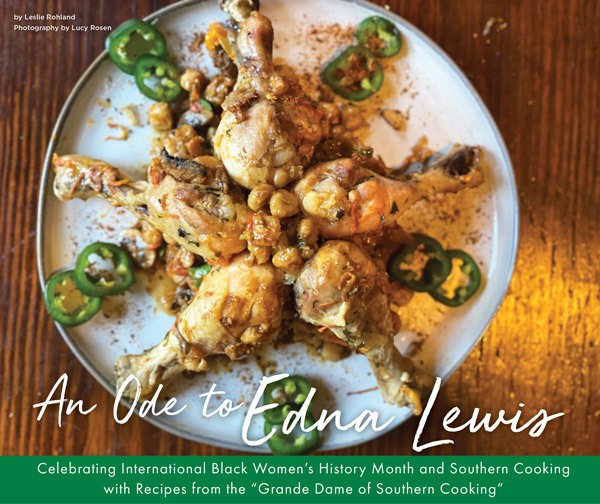 April is a month of many things – including International Black Women’s History Month. In honor of this important month, we are paying tribute to admired chef and cookbook author Edna Lewis – a woman with a remarkable life story who has been referred to as the South’s answer to Julia Child and widely regarded as the person who put Southern cooking on the map in the 20th century.

Known as the “Grande Dame of Southern Cooking” and for teaching the American public to appreciate Southern meals in a new way, Edna Lewis was among the first African American women from the South to pen a cookbook that did not hide the author’s true name, gender or race, according to the National Women’s History Museum. She spent more than 75 years in the culinary world, where she was hailed as an esteemed chef in many popular restaurants. In addition, she published three highly acclaimed cookbooks and won multiple James Beard awards. The granddaughter of an emancipated slave, Edna rose to prominence cooking for celebrities, including Marlon Brando, Marlene Dietrich, Tennessee Williams, Greta Garbo, Howard Hughes, Salvador Dali, Eleanor Roosevelt and Truman Capote. She has also been immortalized by the United States Postal Service on a Forever stamp.

Edna died at 89 years old in 2006, but her legacy lives on with her lasting influence seen in younger chefs who have embraced Southern cooking. Her cookbooks remain extremely popular and are considered an essential part of any culinary library. In fact, a first edition of one of her most famous cookbooks, “In Pursuit of Flavor,” is featured in the Smithsonian Institute’s National Museum of African-American History and Culture.

In honor of International Black Women’s History Month, and in tribute to the Grande Dame of Southern cooking, here are just some of our favorite Edna Lewis recipes (including Edna Lewis’ Famous Coconut Lane Cake, featured at The Cottage Café in Bluffton this month). I think it will become a fast favorite for you and your family, as well.

Preheat oven to 325°F. Cut the chicken into serving pieces, or have the butcher do so. Heat a nonstick skillet over a high flame (heat) and sear the chicken on all sides, but do not brown. This will keep the skin from seizing up during the baking. Set aside on paper towels.
Drain the hominy in a sieve, rinse it and drain it again. Spoon into a 3-quart casserole with a lid. Arrange the chicken pieces on top. Layer the onion, bell pepper, carrot, mushrooms and jalapenos on top. Sprinkle with the cumin, then crumble the oregano over. Season with pepper and place bay leaf on top. Pour the vermouth into the casserole, cover and bake 45 to 50 minutes, or until cooked through.

When the chicken is cooked, remove from the oven and discard the bay leaf. Add the cilantro and cream to the casserole and mix to combine all the ingredients in the casserole. Season with salt to taste. Serve the chicken pieces with the hominy mixture alongside and spoon the juices over. 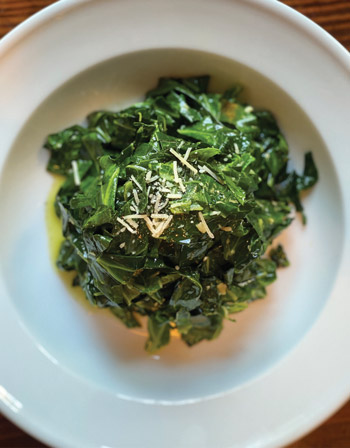 Wash leaves and drain, but don’t dry. Stack a few leaves, with a large one on the bottom, and roll them into a tight cylinder, so the stem runs along the length of the roll. Hold it tightly, and shave it crosswise into very thin ribbons. Cut all the greens this way.

In a large skillet or Dutch oven over high heat, heat the oil until shimmering, add garlic and stir. When the garlic is golden, add the collards and cook, tossing thoroughly, until they’re all dark green, tender with a little bit of crunch. Add salt to taste. 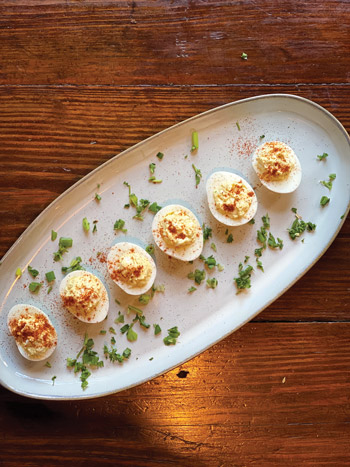 Put the eggs in a large saucepan filled with water to cover by 2 inches. Add 1 tablespoon of salt and bring to a rolling boil over high heat. Immediately remove the pan from the heat, cover and let stand for 10 minutes. Pour off the hot water and fill the saucepan with cold water. Gently crack the eggs in the water to loosen the shells. Shell the eggs. Cut a very thin slice from the bottom of each egg so the eggs will stand up. Slice off the top third of each egg and scoop the yolks into a coarse strainer; reserve the whites. Press the egg yolks through a strainer into a bowl. Blend in the mayonnaise, cream, sugar and vinegar. Season with salt.
Using a teaspoon or a pastry bag fitted with a star tip, generously fill the egg whites. Arrange the eggs on a plate, sprinkle with the chives or scallions and serve. The stuffed eggs can be refrigerated for up to 4 hours. Sprinkle with herbs just before serving. 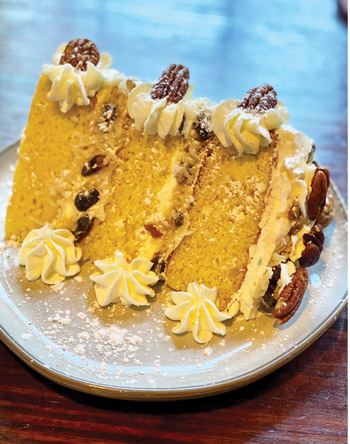 To make cake: Preheat oven to 325°F. Butter and flour three 9-inch cake pans; line bottoms with parchment paper. In a small bowl, sift together flour, baking powder and salt; set aside. In another small bowl, mix together milk and vanilla; set aside. In the bowl of an electric mixer on medium speed, cream butter and sugar until light and fluffy. Reduce speed and add the flour and milk mixtures in 2 or 3 batches, beginning and ending with flour.

In a separate bowl, beat egg whites until soft peaks form. Stir 1/3 of egg whites into batter. Fold in remaining egg whites until just incorporated. Pour batter into the prepared pans and bake until cakes are springy and edges slightly pull away from sides of pans—20 to 25 minutes. Remove from oven and let cool on wire racks 10 minutes. Loosen sides with a knife and invert cakes onto racks; remove parchment paper and cool completely before frosting.

To make frosting: In a medium saucepan over medium heat, whisk egg yolks and sugar together until sugar dissolves. Add melted butter, stirring constantly until thick enough to coat the back of a spoon—1 to 3 minutes. (Do not let mixture simmer or boil!) Add pecans, raisins and coconut; cook 1 minute. Remove from heat and add vanilla and bourbon; cool to room temperature before using. Spread 3/4 cup frosting between each layer of cake; use the rest for the sides and top.

Leslie Rohland, owner of the Cottage Cafe, Bakery and Tea Room in Old Town Bluffton, is an award-winning recipe creator who is known for her delicious and ever-changing menu at her extraordinary restaurant. She is also the owner of the popular healthy eatery The Juice Hive and the micro-roastery May River Coffee Roasters. For more information about The Cottage Cafe, visit www.thecottagebluffton.com or call 843-757-0508.