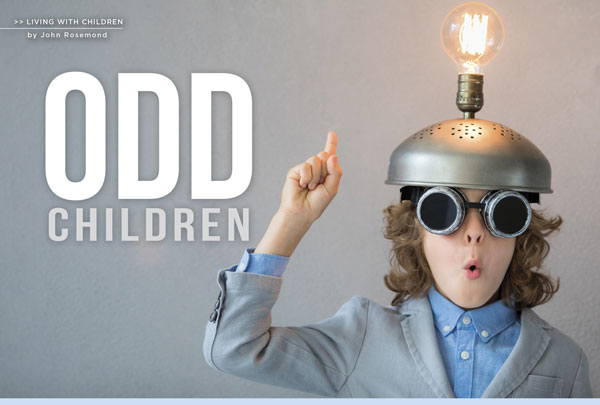 I have come up with a new psychological diagnosis, one that I won’t, however, be submitting for approval to the powers that be: simply, odd. My “odd” is to be distinguished from ODD, the acronym for oppositional defiant disorder, an invention that enables mental health professionals to obtain payment from insurance providers…but that’s another column entirely. Stay tuned!

Odd is what all human beings are. Starting from the top down, all adults are odd. I am odd, you are odd, Bill Gates is odd, President Trump is odd, Barak Obama is odd (must have diversity, you know), and so on. Most people, by early adulthood at the latest, begin to identify their personal peculiarities and realize they must be concealed from the general public lest they cause social and employment difficulties. Adults who fail to conceal their oddities are prone to becoming known as “jerks” and other equally hobbling nicknames. Or, they become mental health professionals, politicians, and famous actors who win Academy Awards.

Odd is unique to humans. Animals—take dogs, for example—only become odd when exposed to very odd humans for long periods of time. Just for the record, my dog, Mazie, is not odd, which is probably due to my wife’s influence. Mazie is simply cute and playful.

Children, being human, are odd. Children, however, are not capable of the introspection necessary to realize they are odd. So, they let their oddness hang out rather indiscriminately. In my career as a family psychologist, I have come across a veritable plethora of odd kids. Take the four-year-old who played only with G.I. Joes, wanted to dress as his role model, and often insisted upon being called “Sargent Joe, Sir.”

Sargent Joe’s parents sought the advice of a psychologist who wanted to assign him a diagnosis and take him into weekly therapy sessions where he could work out his “anger issues.” Wisely, the parents declined “treatment” for their very inventive and imaginative mini-Joe.

They subsequently asked my opinion. I told them his fascination with G.I. Joe was not likely to last past second or third grade, which it did not. Mini-Joe did what is called “growing out” of something odd. When he realized that other boys did not all share his obsession, he let it go and moved on.
Sometimes, a child’s odd behavior needs more of a push. It needs to be stopped, for the benefit of all concerned. Take the pre-school girl who started making clucking sounds with her tongue when she was a toddler. By the time she was in kindergarten, her clucking was driving her parents up the proverbial wall. Her teacher, furthermore, wanted her to visit with the school psychologist. She mentioned the ubiquitous “spectrum,” which probably applies to everyone.

I told the parents their daughter’s clucking was simply an annoying habit that, unfortunately, was drawing lots of well-meaning but counterproductive attention.

“Tell her she can only cluck in her room and if she forgets and clucks outside her room—at, say, the dinner table—you will send her to the downstairs bathroom for five minutes, where she can cluck the entire time.”

Voila! Within two weeks, the clucking stopped—outside her room, that is. Is the little girl still slightly odd? Yes, but that’s life. Some things just take patience and a lotta love.