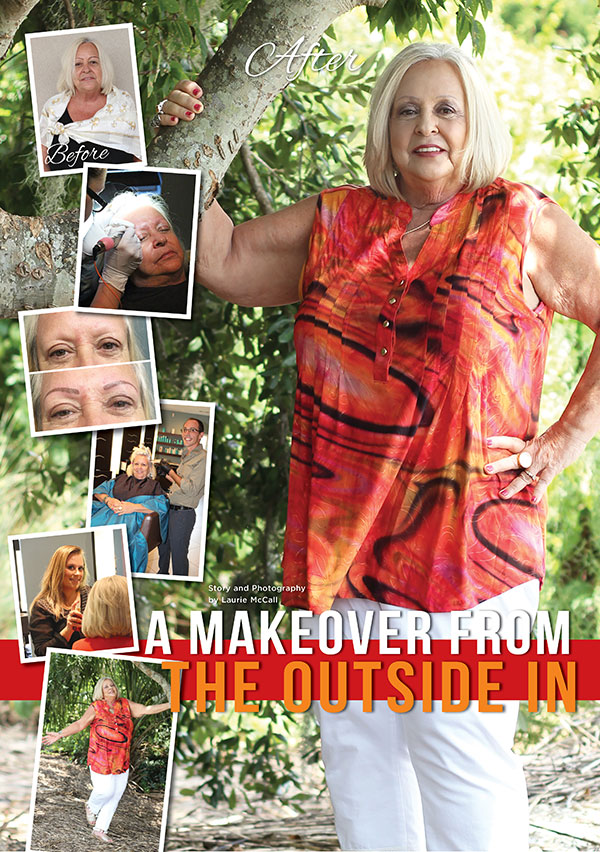 Story and Photography by Laurie McCall

Ms. Carol Cochran says things happen in threes. The first was when she had a stroke in her right eye, leaving her nearly blind. Then, her mom passed away. The third happened back in February when doctors told her she has congestive heart failure. After she lost her mom, she never  so much as even put on lipstick again. The most she managed to do when getting fixed up was to draw on her eyebrows.

Ms. Carol left Hilton Head a few years ago to live in North Carolina and take care of her grandson, her pride and joy, whose favorite job was wiping off his grandma’s eyebrows before they both went to bed. She decided to return to Hilton Head and as soon as she did, the universe began affirming her decision. First, she found a ground-floor, handicapped accessible apartment with a primo parking space right out front for her new car. Second, she got a job as a hospice nurse, and the third bit of magic happened at our own Pink Partini when she was chosen as our September makeover candidate.

The makeover all began at Island Medical Spa in Bluffton. Island Medical Spa is a division of SunGate Medical Group under the direction of Dr. Kenneth Farr, and it has two locations, Bluffton and Hilton Head. We chose the Bluffton office to meet Ms. Carol’s makeover needs. First up was lead esthetician Amanda Ellis, who applied a Perfect Peel™, a revolutionary peel that makes skin look younger, healthier and clearer in just one week. The process takes less than 15 minutes and is virtually pain free. The worst part, according to Ms. Carol, was slight itchiness as her face was peeling.

Next, Dr. Farr performed blepharoplasty on Ms. Carol, which is a cosmetic procedure for correcting and removing excess skin from the eyelid. For Ms. Carol, her eyelid was interfering with the sight in her good eye. She remained awake during the surgery, which required only local anesthesia. Outside of some swelling and discoloration during healing, it was a relatively simple procedure that left her with an uplifted look.

Sarah Rhoads, owner of Permanent Cosmetics located in the Island Medical Spa Bluffton office, offered to donate her services to gift Ms. Carol with permanent eyebrows. She began by drawing eyebrow stencils and applying a numbing compound. Sarah uses a custom handpiece that gives a soft and natural appearance, similar to microblading. Ms. Carol says she didn’t feel a thing, and her eyebrows look amazing. She will need to go back for a touch up after six weeks of healing. Her eyebrows should last for one to two years, depending on sun exposure. She will need to have them refreshed after that.

Once her eyebrows healed, Ms. Carol and I met at Aqua Med Spa & Salon, also a division of SunGate Medical Group, where cosmetologist Joey Dasher worked his magic, adding highlights and lowlights to give Ms. Carol’s hair a more natural appearance with added dimension. He stacked her hair in the back to give it movement and body.

We listened as Ms. Carol told us stories of being a chef at a “fat farm,” owning a casino, traveling the world as an in-home health care provider and working as a hair dresser. If she hung a cloth diaper on the clothesline, all the neighbors knew that meant she was doing hair that day for five dollars per family just to help them out. “God always sends me to the people who need me the most,” she said. Now it was her turn.

Aqua Med Spa Cosmetologist Rachael Prichard added her touch by applying Ms. Carol’s makeup, using all Jane Iredale products. She began by cleansing and priming the skin. Then she added a lighter color under her eyes followed by foundation. Next Rachel used bronzer powder to set the foundation and enhance Ms. Carol’s bone structure. She applied eyeshadow ranging from nude to brown and then outlined her eyes with a raisin colored eyeliner. A reddish purple stained lipstick added the final touch. One look, and Ms. Carol had to talk herself out of crying.

Our last stop before the final photo shoot was to Belk of Beaufort, where General Manager Christie Telep generously donated an outfit. Belk Stylists Michael Wilder and Alisa Jackson knew we were coming and were prepared with several new looks for Ms. Carol to choose from. She chose a multicolored, flowy blouse by New Direction, a Belk brand, and a pair of Crown and Ivy white capri embellishment pants, loving her new look.

Ms. Carol was so moved by the kindness and generosity of everyone who helped out with the makeover. She said, “Y’all have turned my life around. This was a makeover for my soul.”

Special Thanks To:
The marvelous staff at SunGate Medical Group and Island Medical Spa, including Founder and Medical Director, Dr. Kenneth Farr; Lead Esthetician, Amanda Ellis; and all the support staff who took such good care of Ms. Carol. Call to schedule your appointment: Bluffton 843-705-1515, HHI 843-689-3322.

Sarah Rhoads of Permanent Cosmetics for her amazing ability to create natural, dimensional looking eyebrows. Call for a timeless look that takes no time at all. 843-422-4141.

Joey Dasher and Rachael Prichard of Aqua Med Spa & Salon. Call Joey to schedule an appointment for your new fall cut and color. He’ll bring the sunshine for free. Be sure to make time for Rachael to bring out your natural beauty with her makeup artistry, because when you look good, you feel confident. 843-522-9179.