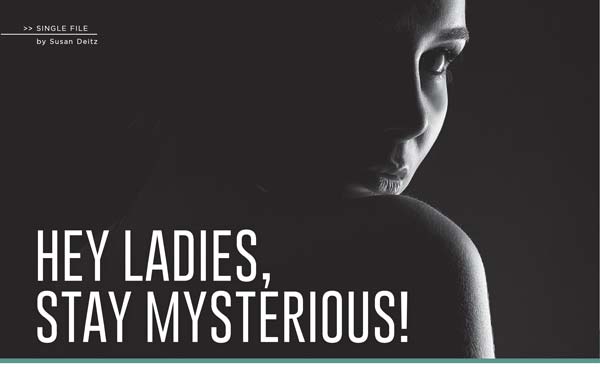 DEAR SUSAN:
You’re always going on about head games between men and women, yet I’ve read where you are a strong believer in a woman’s mystery. Please explain. —From the “Single File’’ Blog

DEAR BLOGGER:
The mystery I favor is poles apart from the senseless and childish phoniness so common in the dating game. It takes a clever woman (yes, mystery is usually associated with the female of the species.) It has to do with not telling your life story from day one too early in a promising relationship. Be charming, soft, feminine. Leave plenty of silent spaces in the conversation for him to tell his story. Don’t laugh too often, but do smile when appropriate. Above all, be authentic. Be yourself; be real. Listen when he speaks, don’t hurry to have him clam up so you can have the limelight. Most important, show him someone who doesn’t need to hog the conversation to be interesting. Believe me, the spaces in the talk between the two of you are much more intriguing than the words themselves. The point is to have him intrigued, curious to know more about this woman who keeps personal stuff private. Right off the bat, the first few minutes you two are conversing, let him see someone who can hold herself with dignity, maturity—a clever, upbeat woman who doesn’t spill the beans on the first meeting.

DEAR SUSAN:
I wonder if my anger toward men is keeping me from a happy relationship with one. Some time ago one of your columns touched on this, and I’ve been thinking about it ever since. I know you think men are angry toward women, but how about the other way around? ‚—From the “Single File” Blog

DEAR BLOGGER:
Aha. The shoe (a stylishly pointed one, at that) is on the other foot. Let’s you and I go down memory lane and figure out just where the hostility-to-men gene came from. (By the way, I admire your courage to look under these rocks.)

> Was your father reluctant to show you his love or approval?

> Do you find yourself using the cause of feminism or women’s rights to disguise your resentment of men?

> Did your older brother(s) leave you out of things? Did your parents show him preferential treatment because he was male?

> Were you badly burned by a teenage crush?

> Do men make promises to you and not follow through most of the time?

> Did your father hurt your mother in significant ways?

> Has a man abused you physically or emotionally?

> Was your father an abusive person? An alcoholic?

> Did your mother complain to you about your father -- and men in general?

> Are you afraid in your heart of hearts that a nice man will reject you, and so you reject all men first?

> Are you overweight to keep men away and to be sure you will be left alone?

> Did your mother have bad experiences with men when she was young?

> Does your hostility toward men frighten you? Are you afraid that, if released, it will drown you in its torrent?

> Do you think you feel friendly toward men?

> Do you want a good friendship with a man? Have you ever had one?

> What can you learn from your answers here that will help you build better friendships with men?

Will you talk about these questions with your best confidant or counselor? Soon?

Catapulted into single life as a young widow and single parent, Susan Deitz’s unusually deep understanding of her new world was about to be born, a course in undependence (her term for the wholeness needed for a full life) unlike any she had known at Smith College. Totally unprepared for life without a mate, her nights were battles with fear and the dreaded what-ifs. But when those tigers retreated, each new dawn found a more confident woman. On her own, living out her singleness, she was using her own judgment to make decisions for her little family—minor perhaps in the wider world but crucial for her small family. And they proved to be good ones. From those years of life lessons learned the hard way came a lifework and the world of Single File. Have a question for Susan? You can reach her directly at This email address is being protected from spambots. You need JavaScript enabled to view it.. © 2022 CREATORS