The Future of Movie Theaters

The Future of Movie Theaters and a Conversation
with Lucy and Larry Mann,
Owners of Park Plaza Theater

The movie business is always changing, but these days it can be difficult to tell the difference between struggle and outright decline.

It is tempting during these dreary times to pin our hopes on a single solution to an intractable problem: One leader who might save us; one vaccine that might inoculate us; one day when suddenly everything will be back to normal. In reality, the return to normalcy will be slow and halting. Even once a vaccine becomes available, not everyone will receive it at once. We will return to our offices, our friends’ homes and, yes, movie theaters in small groups, then larger ones. Appealing as it was to cling to a symbol of resilience and the shared, communal experiences we yearn for, it was never that simple.

The pandemic has only accelerated the ascendance of streamers in Hollywood. Studios are worried that even after the pandemic ends, audiences will have gotten so used to having decent, new content served up to them at home, they won’t bother heading to the movie theater. As a result, studios have been hoarding their biggest films, rather than releasing them on Hulu, Netflix or video-on-demand services.

Of course, these studios’ strategy is contingent upon the idea that Hollywood will be able to release the movies they are holding back sometime this year, or early next year. Even if streaming movies doesn’t measure up to theatrical releases, services like Netflix and Hulu have found niches in specific genres that big, older Hollywood studios have abandoned, like rom-coms and serious, mid-budget dramas.

Lately, I have been thinking about some of the best memories I have had in movie theaters: In 1972 when I walked into the Orson Wells Theater in Cambridge, Massachusetts, or when I waited in the long line with my preteen children to see the first Star Wars. There is something special about seeing a film in the cool, dark theater with that giant screen!

We will have that experience again! It may be when Daniel Craig’s final James Bond movie No Time to Die drops in November. It may be when Fast & Furious 9 premieres next spring. It may be even later than that. Theaters will be implementing a lot of changes to try to stay afloat in the interim, like reducing capacity, upholding mask requirements and special cleanings. But—assuming enough is done to keep them in business before that time—pent-up demand for a fun night at the movies will buoy struggling theaters when things finally do begin to change for the better. 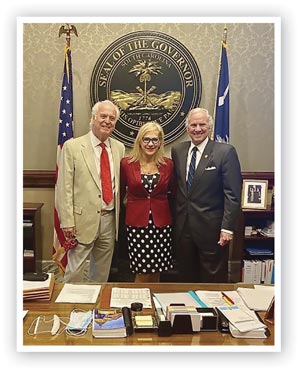 A conversation with Lucie and Larry Mann
Owners of Park Plaza Theater
Their story is one of determination and community support. The Mann’s theater is well known as not just a place to watch a movie, but also to have a whole experience, embracing your movie night. A full-service bar, comfortable lobby seating, twinkly lights, full-service food menu, great popcorn and an incredible welcoming staff.

Being closed during the pandemic, they sold curbside popcorn. Then after a complete cleaning and special installed air filters, they began to open for private film parties. Then they were shutdown. With a massive community outcry, they organized a campaign to lobby the governor to reopen. With the help of NATO (the National Association of Theater Owners), a theater lobbyist, and the assistance of State Representative Shannon Erickson, an appointment with South Carolina Governor Henry McMaster was arranged and off they went to Columbia, proving there is power in organized petitioning. Governor McMaster agreed they could open for private parties and open later in the month to the public as long as specific guidelines were followed.

Congratulations Park Plaza Theater and to the Manns for their courageous determination.