Tribute to the Beatles

Tribute to the Beatles

The recent film YESTERDAY reminds us, just in case we forgot, how very talented The Beatles were.

The Beatles were an English rock band formed in Liverpool in 1960. The line-up of John Lennon, Paul McCartney, George Harrison and Ringo Starr led them to be regarded as the most influential band of all time. The group was integral to the evolution of pop music into an art form, and development of the counter culture of the 1960s. They often incorporated elements of classical music, older pop and unconventional recording techniques in innovative ways and experimented with numerous musical styles. As they continued to draw influences from a variety of cultural sources, their musical and lyrical sophistication grew. They came to be embodying the era's socio-cultural movements.

Led by primary songwriters Lennon and McCartney, The Beatles built their reputation playing clubs in Liverpool and Hamburg over a three-year period from 1960-63. The core trio of Lennon, McCartney and Harrison went through a succession of drummers before asking Starr to join them in 1962.

The Beatles were international stars by early 1964, leading the “British Invasion” of the United States pop market and breaking numerous sales records. They soon made their first film debut with A Hard Days Night in 1964. From 1965 on they produced increasingly innovative recordings, and in 1968 they founded Apple Corps, a multi-armed multimedia corporation that continues to oversee projects today related to the bands legacy. After the group’s break up in 1970, all four members enjoyed success as solo artists. Lennon was shot and killed in December, 1980, and Harrison died of lung cancer in 2001. McCartney and Starr remain musically active.

The Beatles are noted as the bestselling band in history, breaking records of over 800 million albums sold. They were inducted into the Rock and Roll Hall of Fame in 1988, as well as each individual from the band. They have won seven Grammy awards and an Academy Award for best song. They were also collectively included in Time Magazine’s compilation of the 20th Century’s 100 Most Influential People. 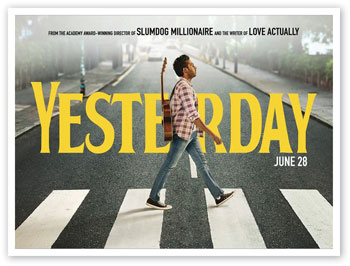 Jack Malik is a struggling singer-songwriter in an English seaside town whose dreams of fame are rapidly fading, despite the fierce devotion and support of his childhood best friend, Ellie. After a freak bus accident during a mysterious global blackout, Jack wakes up to discover The Beatles have never existed. Performing songs by the greatest band in history to a world that has never heard them, Jack becomes on overnight sensation with a little help from his agent.

In Yesterday, the music business is more or less the same as it is now. The real story is how many artists have been inspired by The Beatles, and how that inspiration has flowed into the next generation and the next. How many contemporary songwriters still show The Beatles’ influence?

I really liked this film. Yes, it’s a love story, but the core is a very clever tale. The legacy of The Beatles is fun, and that is what this film reminds us.

Log on to The Beatles official Website to learn more, or refresh your memory about this legendary band: www.thebeatles.com