Resurgence of the Drive-In & Highway 21 Drive In 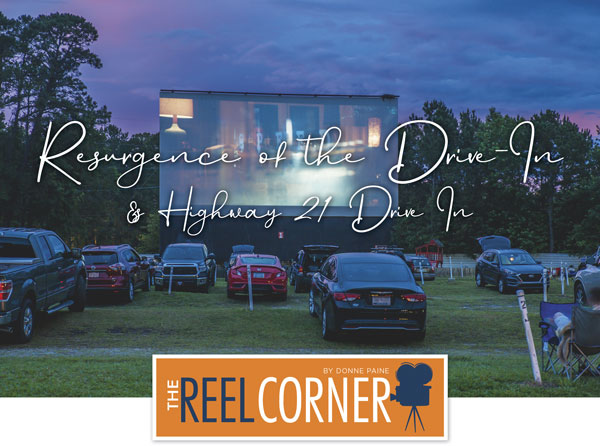 With much of the U.S. economy shuttered and people still being slow to emerge, families are finding that the drive-in movie theater presents the perfect escape.
The coronavirus has forced traditional movie theaters

to close their doors. That seems to be the recipe for a resurgence of drive-ins—
a slice of Americana that had its heyday in the 1950s and ‘60s.

If you drive on Route 21 from Beaufort toward Charleston,
you will pass the cool retro sign of Highway 21 Drive In reminiscent of days gone by.
Low and behold, this drive-in is alive and well and is an oasis for movie goers!

Even though the usual summer blockbusters have been delayed, Highway 21 Drive In has been bustling over the last two months. And, to Joe and Bonnie’s surprise and amazement of creativity, they have received requests for parties and graduations to be held at the drive-in. One of the graduations had decorated individual cars drive through like a parade with music blaring, as the graduates received their diplomas. Then a video was shown on the big screens of prerecorded messages from all the students. It made an otherwise defunct graduation fun and memorable.

To counter the absence of summer blockbuster releases, Barth is scheduling live concerts. He said look for who's playing on their website.

So as we begin to integrate into some sort of normal outside of the house social behavior, why not give a Highway 21 Drive In experience a go. My friend Bud and I ventured out recently one Sunday evening. It was easy to find. The marque lit up on Highway 21 listed the double features and an arrow pointing to the entrance. Typical of drive-ins, the ambiance was one of shabby chic, with old handmade signs marking the way in to a stop sign for the ticket booth, where a friendly young woman handed our change along with a menu of drive-in delights. The menu had everything from hotdogs to funnel cakes; it even listed bug spray. You could see the booth was connected to the concession stand, where it looked like family were busily preparing concessions for customers.

Bud and I have not been to a drive-in for over 40 years, so you can imagine we had a challenge tuning the radio to fit the movie and turning off our parking lights. Maybe because we live in such a high-tech world, I was expecting more. Yet the old rusted poles, where speakers used to be, and the humps in the rows to tilt our car to best see the screen brought back memories of long gone summers, friends piled in Dad’s old Chevy station wagon and being able to watch a film and stare up at a starry night all at the same time.

Thank you to all the drive-in movie operators for hanging in there all these years, especially being here now during the pandemic and giving us a safe place to be entertained and keep our memories alive.

A big thank you to Tom Sharp for letting us borrow his cool wheels, a 1998 Corvette Spitfire! Kudos also to photographer Logan Mack, production director Maria Greco, and to my adorable granddaughter, Charlotte, for going along for the ride. We really had a blast!