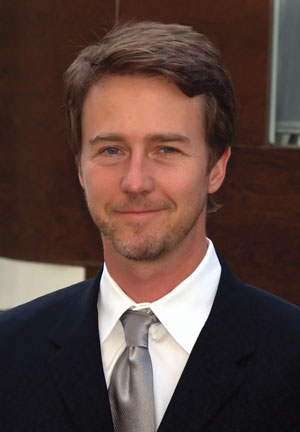 Edward Harrison Norton is an American actor known for his intense performances and uncompromising approach to his work. He has received multiple awards and nominations. Raised in Columbia, Maryland, Norton was drawn to theatrical productions at local venues as a child. After graduating from Yale College in 1991, he worked for a few months in Japan as a consultant for his grandfather’s company before moving to New York City to pursue an acting career. He gained immediate recognition for his debut in Primal Fear (1996), which earned him the Golden Globe for Best Supporting Actor and an Academy Award nomination. His role as a reformed neo-Nazi in 1998’s American History X earned him an Academy Award nomination for Best Actor.

He is discreet about his personal life and expresses no interest in overt stardom. Alongside his work in cinema, Edward is an environmental activist and social entrepreneur. He is a trustee of Enterprise Community Partners (started by his grandfather), a non-profit organization for affordable housing. He serves as president of the American branch of the Maasai Wilderness Conservation Trust and is the United Nations Goodwill Ambassador for Biodiversity. Edward is married to Canadian film producer Shauna Robertson, with whom he has one child. He speaks Japanese and is skilled in Aikido.

I have followed Edward Norton’s film career since Primal Fear, and loved him in his more offbeat films Moonrise Kingdom and The Grand Budapest Hotel. And I couldn’t wait to see Motherless Brooklyn.

In his adaptation of Jonathan Lethem’s Motherless Brooklyn, Edward Norton plays Lionel Essrog, an lonely detective with Tourette’s syndrome, who wanders the streets of New York City attempting to solve the murder of his mentor and father figure. Norton, also the film’s director and screenplay writer, changed a few key elements of Lethem’s novel, transplanting the neo-noir from its original setting in the late 1990s to the 1950s. But something Norton did not lose was its singular fascination with music and pop culture. Enter Thom Yorke with his ballad “Daily Battles”, written to feel like it was out of the past for this movie.

To make the film even more authentic, the art direction, cinematography, use of lighting, smoke from the sidewalk grates in the dark alleys and Harlem jazz clubs all make this film’s shady dealings, greed and deception neo noir at its best.

Regarding playing a man with Tourette’s Syndrome: “There are really two challenges going on with the representation of someone with a condition, whether it’s cerebral palsy or cancer or Tourette’s syndrome. You’ve got to do the basic groundwork to understand the nature of the thing,” Edward explained.

The other main challenge came from keeping the portrayal from falling into “the Hallmark version of the thing,” which he said occurs when “…all you’re doing is the nobility of the person living through the diagnosis.”

If you’ve been looking for a reason to go to the theater, Motherless Brooklyn is a must see!

Merry Christmas to all Reel Corner & Pink readers.
May you have a Happy Healthy and Prosperous Holiday!