Celebrating the 19th Amendment in Film 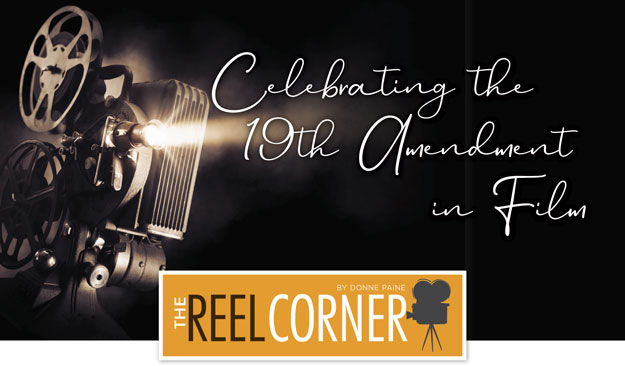 Can you imagine living in a time when your voice, your opinion,
your ability to vote your choice was not recognized? Was not allowed.
Well ladies, that’s the way it was until August 26, 1920, just 100 years ago.

After seven decades of a civil rights movement to allow women to vote,
the 19th Amendment to the Constitution was ratified.

In honor of the fearless, brave, courageous and patient women who helped make it happen, I dedicate the Reel Corner column this month with the following films. These are films of resistance, empowerment and justice.

Suffragette
This stirring film shows the painful struggle of British women as they fight to get the right to vote two years before American women. Many activists were fired from their jobs, learned jujitsu to protect themselves and were even thrown in jail and force-fed through their nose if they went on hunger strikes. The movie stars Carey Mulligan and Helena Bonham Carter, with Meryl Streep as real-life civil rights leader Emmeline Pankhurst.


Iron Jawed Angels
With modern music and dazzling cinematography, this film stars Hilary Swank in a stunning performance as Alice Paul, the real-life suffragists and women’s rights activist who was one of the main leaders in pushing for the 19th Amendment to the Constitution that would allow American women to vote. Frances O’Connor, Margo Martindale, Vera Farmiga and Anjelica Huston also star.


The Divine Order
This powerful film tells the story of a Swiss housewife and mother in a time of social upheaval in 1970. Yes, as shocking as it sounds, Swiss women didn’t get the right to vote until 1971. This film is clever, funny and a great look into the shifting power dynamics between men and women that took place in the 1970s.

Mary Poppins
With such great songs like “Supercalifragilisticexpialidocious” and “Chim Chim Cheree,” you may have forgotten that Mrs. Banks (Glynis Johns) was a suffragette and sang the rip-roaring song, “Sister Suffragette” with infectious enthusiasm. What a gem!


Selma
Even though black men and women had the constitutional right to vote well before 1965, they were being denied access to the voting polls at every turn. This film shows the protest marches from Selma, Alabama, to the state capital of Montgomery, led by Martin Luther King, Jr.  played by David Oyelowo. This movie is a true inspiration.