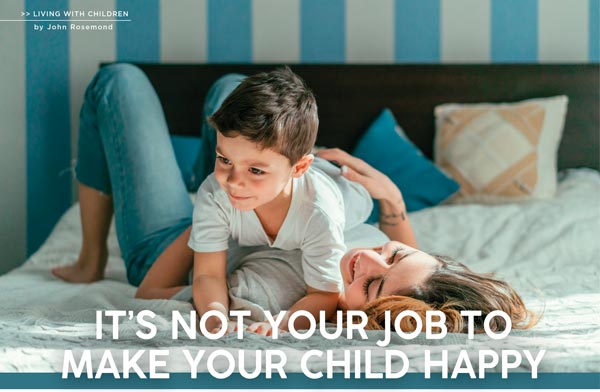 Making children happy became a parenting goal in the early 1970s. The paradox, as everyone with a modicum of common sense knows, is that the more effort parents put into making a child happy, the more unhappy the child becomes.

Underneath the cute appearance of an infant lurks a tyrant. I would have been expelled from graduate school for writing that sentence, but as loathe as many of today’s parents are to accept it, that is the truth. Another paradox: Parents who are unwilling to accept it are the ones most likely to give the tyrant permission to step out of hiding and begin his reign of terror.

What is she thinking? He will outgrow his tyranny? More likely he will grow into it. If she just gives him this one more thing, he will begin to calm down? Quite the contrary. He is becoming addicted to controlling her. Power corrupts even a two-year-old. He is not going to suddenly get his fill of mommy and begin acting like a reasonable human being. As time goes on, he is going to devise ever more ways of asserting that he is the big dog in the relationship.

The mother-child relationship is already codependent and the only person who can change the terms of that contract is mommy. The problem, of course, is that hell hath no fury like a tyrant denied. Let’s say she begins with putting him to bed in his crib, kissing him goodnight, and walking out of the room. He will scream like he has never screamed before. He will go completely insane and that is not hyperbole. That will be the worst night of her life, the good news being that if she stays the course, he will get over his trauma, begin to act like he’s never been traumatized, and go to sleep when put in his crib.

Once he has accepted that he’s going to sleep in his own bed—I give it two to four weeks—it’s on to letting him know that he doesn’t control mommy during the day either. He will go insane again. In short, things will get worse by much before they begin to get better.

I have witnessed what happens when the tyrant is allowed to dictate his parents’ lives for more than a few years. First, everyone is miserable. Second, the tyrant goes to school and is quickly identified, tested, diagnosed with some bogus “disorder,” and put on a medication of which the side effects become a problem in and of themselves. That’s when the “medication shuffle” begins.

The authors of the two best-selling parenting books of the 1970s urged parents to do everything in their power to ensure their kids possessed high regard for themselves—high self-esteem, that is. Since unhappy kids must not have high self-esteem, the goal of raising children became that of making, and keeping, them happy.

And now, some fifty years later, unhappy tyrants are everywhere. It is one of the saddest things in all the world, especially the world of all too many of today’s grandparents.