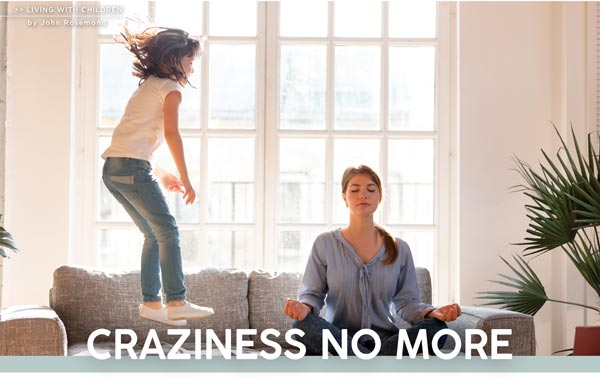 Q: My husband and I recently visited our son’s family. We live two thousand miles apart, and with the pandemic and all, hadn’t seen one another in several years. We were appalled to discover that they—our daughter-in-law in particular—practice “gentle parenting,” which seemed to explain our two grands’ generally disrespectful and disobedient behavior. When we confronted our son about the craziness in his household, he told us it was his wife’s “thing” and he was going along with it to keep peace. Is it us, or is it “gentle parenting”?

A: “Gentle parenting,” boils down to treating children as if they are rational, reasonable equals. That significant numbers of adults actually think a constant downpour of love will magically transform a child into a person of that description would be mind-boggling if it wasn’t just one more symptom of these anti-intellectual times. Furthermore, your son’s admission that he is only going along with his wife to keep peace is telling of the fact that in too many an American household, the father has zero say in how the children are being raised. The woman he refers to as “my wife” has all but completely abdicated her proper role. She’s a full-time mommy. He would be more accurate in calling her “my children’s mother,” albeit even “my” is questionable from a strictly philosophical perspective.

“Gentle parenting” is driven not by research, which clearly favors traditional, authoritative childrearing, but appeal to emotion. The underlying message: If GP isn’t living up to its promise, the mother must not be doing it correctly, working hard enough at it, bending over suitably when she talks to her child, employing a sufficiently wheedling tone, etc., which is why many a mom has told me that GP put her under tremendous stress, and that she was only doing it because it’s what all her friends were doing, and if she didn’t, she would no longer be included in play dates and the like. Charming. If a mom doesn’t go along with the crowd, her child will pay the price.

Some moms are getting it. One former GPer recently told me that finding yours truly online and beginning to read this very psychologically incorrect column had liberated her from “the craziness.” She seemed to be holding back tears. Keep in mind that “my” approach to raising children isn’t “mine” at all. It was the norm for thousands of years, to no one’s detriment.

So, moms, listen up: Being liberated from the craziness of gentle parenting is worth being simultaneously liberated from crazy toddler play dates overseen by micromanaging mothers and crazy “My Child Is More Worthy Than Your Child, and I’m Gonna Prove It” birthday parties that run into the thousands.

Q: Our soon to be 5-year-old son enjoys playing with his 14-month-old brother, but there have been three times recently when the baby has started crying, and when I check, big brother has a guilty look on his face. So far, the baby has suffered a scratch under one eye, a red mark on his face where a ball hit him, and a bruised forehead from falling over. When big brother is banished to his room for these incidents, he is more upset about being punished than about hurting his brother. His lack of remorse bothers us. As a result, we’ve put baby brother off limits for a time. Are we expecting too much?

A: I think you may be jumping to unwarranted conclusions. Let’s face it, folks, when a 5-year-old boy and a 14-month-old boy interact on a daily basis, the younger one is bound to experience occasional pain. This is the almost inevitable consequence of having two boys, and you are going to go slowly insane if you assign yourself to the impossible task of preventing this from happening. For at least the next three to four years, until the physical disparity begins to level out, the younger one will experience more play-related insult than the older one. In and of itself, this isn’t bad. It’s just the way it is. Boy play tends to be rough at times. Furthermore, the fact that big brother even wants to play with a 14-month-old is a good sign, an early indication of a growing relationship. Count your lucky stars that signs do not point to early resentment on the part of your first-born.

Furthermore, you may be misinterpreting big brother’s reaction to being punished for these incidents. You think he lacks remorse. I think he’s justifiably upset at having been punished for something he didn’t intend to do.

For example, if I’m trying to stay within the speed limit, but I fail to see a “Reduce Speed Ahead” sign, and I’m ticketed for speeding, I’m not going to be remorseful. I’m going to be upset (albeit careful not to let the officer know). After all, it was not my intention to speed. On the other hand, if I’m intentionally speeding, trying to shave time off a trip, and I’m pulled over, I’m going to accept the ticket, apologize to the officer and be a better citizen in the future. I have a strong feeling that your older son is being “ticketed” for unintentionally exceeding his younger brother’s “speed limit.” Under the circumstances, I’d fully expect him to be more upset than remorseful. He’s being punished for being, at worst, clumsy.

When incidents of this sort happen, you should take the opportunity to help big brother understand the baby’s limits. For example: “I know you want to teach your brother to play catch, but you can’t teach a baby to catch by throwing things at him.” Then, help him learn ways of playing that won’t involve risk of pain to the baby, as in, “Roll the ball instead of throwing it.” You also need to praise him for his attempts to be such a good big brother, however awkward they may be at times.