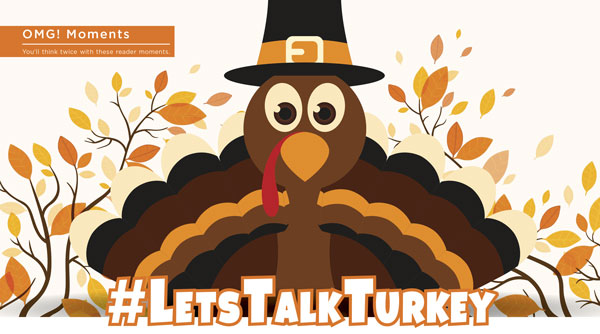 I had 30 people at my harvest table with all the leaves in it. When anyone wanted to get out of their seat, they had to crawl under the table since the table extended out of the dining room into the living room with no room in the doorway! It was fun!

We went to a resort at the Matterhorn in Switzerland. The chef made a turkey shaped pate, added sparklers and paraded it around the dining room!

I booked my flight on the wrong day!!!

I cooked dinner for friends, which consisted of five couples who each brought their own stuffing recipe. We had quite a variety: oyster, apple, sage, shrimp and sausage. Yum, Yum!

During my childhood my entire family would always have oyster dressing fights! We still reminisce over it.

In New Jersey, I always had my Thanksgiving turkey prepared by stores, so I didn’t know how to cook a turkey at all. Another thing I had to learn…

My brother has a turkey farm with 48,000 turkeys! My son is a turkey farmer there, and I have never had a free turkey! (Only hams!)

Every other year we eat at my brother’s house, and he and his wife are vegetarians. So, we don’t eat turkey, we eat tofurkey!

I was trying to impress my new boyfriend by making chestnut stuffing—a new recipe. I didn’t know to put a slit in each chestnut, so they exploded all over the oven, the kitchen, in my hair and face! That boyfriend is now my husband, and he still let’s me try new recipes.

My ex-husband invited his father for Thanksgiving dinner, and he was supposed to bring the turkey. Ok, it’s two hours later, when was he supposed to arrive? Where was he? No turkey. So my ex called his dad, who screamed at him. Twenty minutes later, a drive-by turkey was delivered out the car window and heaved onto our front lawn—frozen solid. Needless to say, we had no turkey for Thanksgiving in 1993, but the other food was great because I made it!

My dog ate the turkey carcass! My Jack Russell Terrier spent the night at the emergency vet—what a very expensive turkey!

I usually do most of the cooking on Thanksgiving, but when I ran to take a shower, my mom put a large dish of rice in microwave to cook. Little did I know, it needed to be stirred and cooked for a bit longer. Instead, I tried to take it out of the high microwave thinking it was done and sloshed scalding hot water all over the front of me. My mom was horrified. From now on, the kitchen is my territory!

My mom was a wonderful cook, but I’d rather have been outside playing football with the boys. Guess I never paid attention at Thanksgiving on how she prepared the turkey. How hard could it be? Got the bird from the store for my first Thanksgiving dinner as a newlywed, put it in the oven and kept checking on it. Finally done, but something was wrong. No one told me about the bag in the turkey’s butt with all those extra body parts in it!

OMG when my oven caught on fire Thanksgiving Day…at least it was only the biscuits!

Decided to go to a Thanksgiving lunch on a pontoon boat…it was freezing cold!

I’ve always thought the separate kids table at Thanksgiving to be a form of discrimination, so I convinced 15+ family members to try my idea of having one table big enough for everyone. Our back porch ping pong table became the center of turkey attention—net down, of course. With a big lazy Susan in the middle, we each utilized our boardinghouse reach and all dined together.