Travel Travesties: Now This is Funny 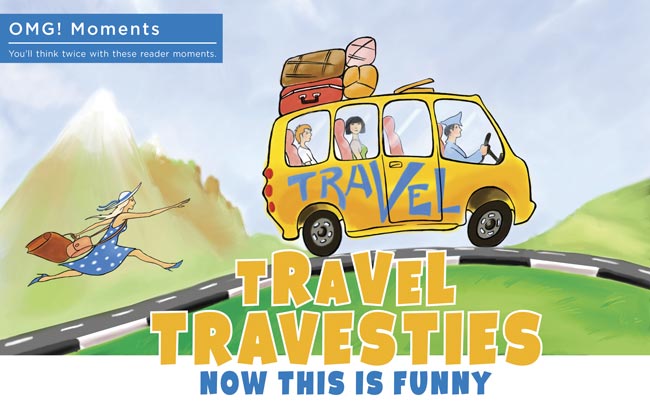 “On the way to Jamaica, at the tender age of 18, I immediately had guys approaching me saying something I thought was an offer of a picture, and of course, I said – ‘yes’. What they were asking was my hand in marriage!”

“I was traveling in Sweden by train, it stopped, and everyone got off except me and my friend; we were busy talking, not paying attention. The train started moving and rolled into a dark tunnel and turned itself off. We had to pull the windows down and yell for help!”

“I was at Disney World where apparently I had split my pants in the back and did not know. A couple hours later, when I went to ride the magical teacups, I noticed my behind was cold on the seat! Now my family has a joke: ‘Why don’t we do what Mandy’s pants did at Disney and split!’”

“Twenty-two years ago, while traveling north to NJ from Brunswick, at eight months pregnant, I informed my husband I needed a bathroom ASAP. With no exit to be found, he was forced to pull off I-95 and hold a beach towel around me, which made a screen. Can’t recall which of the Carolinas had the honor!”

“I was on vacation and went to an amusement park. So many cars were pulling in at the same time, and I had an emergency poop attack, so I squatted next to the vehicle and went in the parking lot! Yikes!”

“Sitting in the first row in coach with my sister Jennifer, the guy in the last row of first class kept looking back and smiling at us. Jennifer was in a terrible mood. Towards the end of the flight, she tells the guy to stop staring at us! When we landed in Dallas, he stands up, and we realize he is Quarterback Troy Aikman of the Dallas Cowboys. Jennifer could have been Mrs. Troy Aikman if she would have been in a better mood!”

“It was my first time in New York City and we were on the subway. The one person in our group, who had ridden before, told us to get off. I jumped off just as she said, ‘WAIT!’ The doors closed and they left me standing there on the platform. We laughed about it later.”

“I was on a roller coaster in Orlando one time and my hair extension ponytail came right off!”
“In a small, off the beaten path village in France, while stopped for lunch I went to what I thought was a ladies room. Turns out it was communal! I’m sitting there doing my business, when a man steps beside me to do his, with only a small partition between us. The best part was my husband’s laughter when I came out red-faced!”

“While teaching English as a second language in Pennsylvania, I oversaw the foreign exchange students. After I retired, my husband and I traveled to Budapest. While walking down the street, I heard my name being called. Turns out it was a former exchange student from 10 years earlier who recognized my voice! Small world, isn’t it?”

“At the Madrid Airport my companion lost her passport. We were on our way to Morocco but ended up in traveler’s hell. Our luggage went on ahead to Morocco. Two days later and $300 poorer, we found the embassy.”

“My mother was our girl scout leader. We were away at camp, where a bunch of us girls found a beautiful stream with water. We brought it back to the campsite and everyone drank it. The area ranger told us the water came from a sewer, and we could have typhoid fever! And at the campsite that same night, a mini-tornado came down on us. What a trip, but we all survived!”

“While in Capri I sat on our patio. The next-door neighbor didn’t spot me and came outside to exercise au natural—even did jumping jacks! I didn’t know what to do, so I stood very still and waited to sneak back inside!”

“I was in the Norwegian tundra 300 miles north of the Artic Circle, where we were going dog-sledding. I brought my own expensive outdoor women’s boots, refusing their plan for old rubber boots and wooly socks. The sled over turned and I had to walk across a frozen lake with frozen toes.”

“On vacation at a water park I went down the water slide. My daughter had gone first. I followed and thought I had done well; I came up out of the water with my bathing suit top around my waist!”

“Leaving the airport in New Orleans, I got in a cab with another couple, who were complete strangers. My seatbelt was stuck in between the seats, so I yanked at it, hitting the gentleman beside me in the mouth and giving him a bloody lip. I apologized over and over. He said, ‘It’s all good, it’s New Orleans!’”

“I was stationed on a ship in the Navy. We made port in Brindisi, Italy, and nine tequilas later, I don’t remember. LOL!”

“I’ve been to Las Vegas three times…but on the first trip, let’s just say ‘What happens in Vegas, stays in Vegas’. But not for me, I was that girl throwing up on the plane, sitting next to two kids on my two flights back.”

“On a Bahamas Cruise I was asked if I was related to Doris Day because I was wearing a retro, polka-dotted dress!”

“Went on a scuba trip to Roatan, Honduras and suffered food poisoning…but only after I was underwater, did I realize it!”

“One summer I got stuck in France without luggage in a hot hotel room, with twin beds, with sheets you could read through, and mice in the dining room.”

“I was seven months pregnant and went on a sailing trip. My husband forgot to grab my bag. I had to wear his clothes for a week; not such a good look!”

“While traveling in our camper one time, a woman next to us kept blowing her car horn and pointing down at the side of our camper, while holding her nose. Our sewer hose was bouncing down the road beside us!”

“Traveling through Virginia, a snow/ice storm hit. I pulled over to the closest hotel. After settling in, without heat, a mouse ran across the floor! My son insisted we go out into the weather to get cheese for the mouse. But, totally startled, we left and drove another hour towards our destination.”
“I traveled to the Grand Canyon and went on the donkey ride down with my mom. We couldn’t walk when we got off the donkeys; we were so sore!”

“When in China, the further south we went, the worse the food got—it was unrecognizable. To be safe, I ended up eating rice and peanut M&M’s and drinking bottled beer. Everyone else on the trip got sick except me.”

“While walking the Camino Real, I missed my hotel walking two miles further. With aching feet and hungry stomach, I walked back the two miles towards town, and asked three older men for directions. They didn’t speak English and practically growled at me. Then I found a younger girl who directed me to my hotel, which was another mile away! Ugh.”