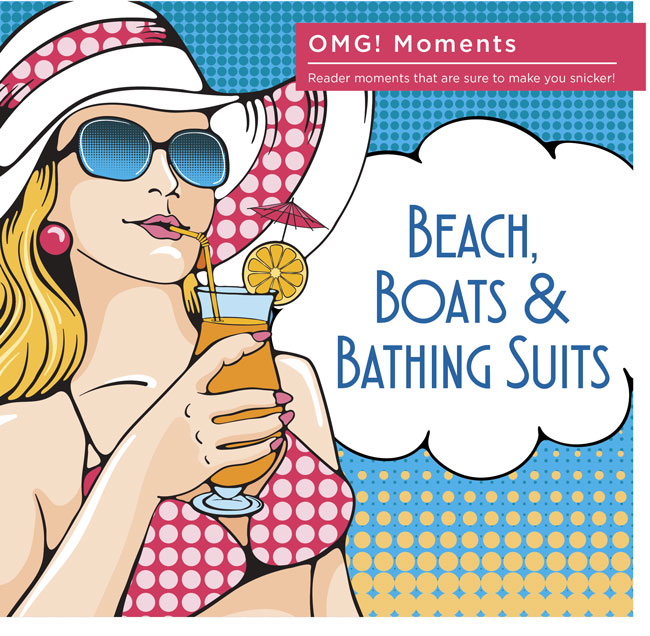 We were out cruising in our CraigCat and got caught in a storm. We went into a small creek for some protection. Well, we managed to corner a large shark in the creek… talk about scary! Finally it swam between the floaters on the boat. What a relief!

My sister was driving the boat when she was a teenager. We were going pretty fast into a cove at Lake Murray. Dad told her to turn, and she said she couldn’t. As we got closer to running ashore, he screamed, “Turn!” She turned around with the steering wheel in her hands and screamed, “I can’t!” Dad lunged forward to cut the engine, and we barely missed barreling onto land.

My husband decided to buy a boat without a depth finder. Not the best decision. Needless to say he hit a sandbar, and everyone in the boat flew out. The boat patrol followed us everywhere we went for the rest of the evening.

As a newlywed, I went to the beach in Florida with my husband and his new boss. His boss took a photo of me coming out of the water. He sent it to us, and the photo revealed my bikini top was barely on! Thankfully my husband wasn’t fired!

I was sailing with my husband and friend when a bad storm suddenly blew in. The wind caught my tube top and off it went…exposing all.

My dad and I were fishing when I was young, and while we were floating along a creek, I was sitting on the bow dragging my feet in the water. My dad calmly said, ‘Put your feet up’ and my stubborn self started complaining.  Then he repeated himself again more firmly. Then finally shouted, ‘There’s a shark behind us, put your **** feet in the boat!’ I listened from then on!

A dear friend pulled her shorts off thinking she had a bathing suit under them…she was wrong.
One time my mom was fishing off the back side of the boat and we were playing on the sandbar. I waded out near the boat, and heard my mom exclaiming “I caught a shark!” It was really small, but at the same time something hit me behind the knee and scared the death out of me. Ends up it was a sea nettle, and I had quite the sting… but at least it wasn’t mama shark!
We were out at Beaufort Water Festival one year with a boat and a jet ski. There was a couple on the boat I’d never met before, and we all proceeded to have a REAL good time all day. When we went to leave, we pulled up to the landing to let the guy off and he grabs all his gear and said, ‘Did I forget anything?’ I looked around incredulously and said “YOUR WIFE!” Everyone burst out laughing; apparently she’d left on the jet ski hours before.

Let’s see… how many times have I been on a sailboat and it runs a ground? At least 3! We’ve also almost been hit by a supertanker in the Savannah River, too. SCARY!
One morning at Sunrise I walked all the way from Islanders Beach Park to Fish Haul Creek on HHI. It took forever but there was a reward when I got there: Two Bald Eagles standing in the surf! Amazing!

One summer we were out doing the “sandbar shuffle” to avoid all the anchors, and I apparently walked into a massive anchor. It hurt so bad, but I walked it off and it was sore for a couple days. A week later, I went to get a pedicure, and as the girl was rubbing my foot, she’s like ‘you realize you have a broken bone in your foot, right?’ Little did I know, that anchor broke a bone!”

I was lying out topless when a man came to deliver flowers. He came up to the deck and saw me. I’m not sure who was more embarrassed, him or me!

I was laying out on the beach in Wildwood, NJ. I sat up and forgot to tie my top. “Hello, Ugh!” I was 17 and mortified.