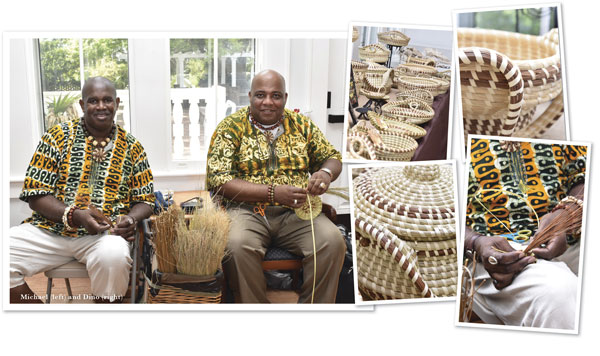 The fabled Gullah culture of the Lowcountry finds one of its most elegant expressions in sweetgrass basketry. A perfect marriage of art and utility, the tight, delicately hued coils once used for winnowing rice and toting produce from the field are now prized as the highest taste in houseware, even as collector’s items and museum pieces. The technique was originally brought from West Africa by enslaved people, then later elevated to an art form by the creativity of their descendants. Using native materials such as longleaf pine straw, bulrush, palmetto fronds and the namesake sweetgrass, Gullah folk have stitched together their baskets by firesides, under trees and in modern living rooms. They’ve sold their wares from roadside stands along the famed Coastal Highway 17 corridor, at festivals and open-air markets, and in the priciest gift shops. A medium-sized bread basket that once went for a $20 bill now easily goes for ten times that much; a large elaborate showpiece requiring weeks of work can fetch hundreds or even thousands of dollars. The world has taken notice of sweetgrass.

Two of the most prominent keepers of this legacy are Michael Smalls and Dino Badger. Gentle giants exuding an air of calm confidence and grace, they remind us of the Lowcountry’s quiet past. “I consider it spiritual,” says Michael, humming quietly to himself in a deep resonant voice as he patiently winds his coil. At times he and Dino even pray over the basket’s future owners. They put real LOVE into it. Their great, weathered hands are strong enough to do any man’s work, but the delicate task they’ve chosen is not just any man’s work—it’s an African man’s work.

“In Africa baskets were only made by men,” said Dino, who’s love of history drew him to the learn the technique. “Only once it was brought to the plantations then the women did it. Your basket has to be strong because it represents you as a person. A basket carries things—and you as a man have to be strong to carry and support your family.”

Dino was born in Brooklyn to parents from Colleton County, South Carolina. His summers were spent here with extended family, which as a child he loved, but later he was put to work on the farm by his grandfather, a sharecropper who raised hogs and grew crops like okra, peanuts and corn. Dino was less than thrilled during high school when his mother moved the family back down South; but today he is grateful for her decision and has lived here ever since.

“I was always interested in everything connected to the Gullah culture,” says Dino, who had a career in law enforcement before he started crafting baskets full-time. “The food, traditions, language, music, art forms, history and especially the stories are such a vital part of life. The only way to preserve history is to teach it, and we love to teach.”

Dino learned to make baskets from Michael, a native of Mt. Pleasant. The Smalls family descends from enslaved workers on the Laurel Hill Plantation, and Michael is proud to be a seventh-generation basket-sewer, having learned the art from his great-grandmother. He explains that the word sew is used rather than weave because it more accurately describes the process of stitching together the coils. Each year in the heat of June and July (the proper window for harvesting sweetgrass), he and Dino are out personally getting their materials from local swamps, suited up against the elements and the critters. The only tools they use to make the baskets are a pair of scissors and what is called the “nail bone.” Back in Africa this was a pointy piece of bone, and on the plantations it was a big, flat old-timey nail, but today it’s just the cut-off metal handle of a fork or spoon.

“All the older people in my family made baskets,” says Michael, whose original designs often come to him unplanned as he works. “I started at age 7, but I was never made to do the baskets; it was my own decision. They would sit under a tree by the roadside stands waiting for sales to come by, and after school or during summer, I would go sit with them. That was also a way for children to make money.”

Later Michael got away from the baskets and went on about the business of life. But he returned to it after learning more of the history and its importance to Gullah culture. Compelled by a strong sense that this needed to be preserved, he left his job as a phlebotomist with Red Cross, moved to Hilton Head on faith and began devoting himself full-time to basketry and public education. He and Dino can often be found demonstrating at the Coastal Discovery Museum (Tuesday-Saturday 10-4), generously engaging with visitors who ask questions and take cell phone videos of them while they sew. They teach multi-day workshops in the community so people can come away with finished creations of their own. They go into schools, amazing every third-grader in Beaufort, Jasper, Hampton and Colleton Counties and getting them fired up about history through a hands-on project. They visit people with Alzheimer’s and dementia at Memory Matters, telling tales and singing Gullah songs. They have been all over the country teaching, and their baskets have traveled even farther than they have, in the hands of tourists, who come to Hilton Head from every corner of the globe and return home with one-of-a-kind pieces. The baskets of these talented gentlemen have even landed in the Smithsonian and been part of a touring exhibit back to their ultimate place of origin—Sierra Leone—where they hope people will take note of how the tradition has evolved from practical to decorative in the hands of their American brethren.

“This is a 400-year-old tradition,” says Smalls with a soft-spoken pride. “It’s a national treasure, not just a regular basket, and we’re trying to pass it on to a few more generations. A lot of ladies, when they’re giving out wedding gifts, they feel the sweetgrass basket is the best gift because you don’t just find it anywhere. And whoever you give it to knows you love them a lot. We take pride in what we do; it’s not just to make a dollar. Of course we do support ourselves, but our main objective is to preserve it, and we’re willing to teach anyone who’s willing to learn.”