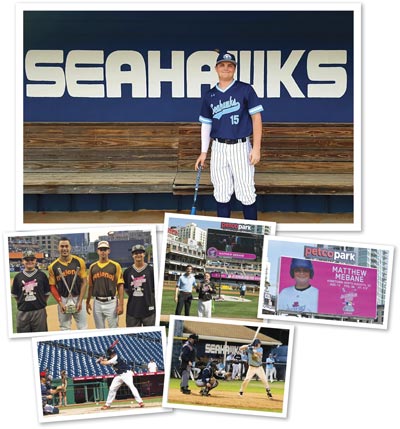 by Dave Smith, M.D
Photos courtesy of
The Mebane Family

Eldrick Woods began watching his dad hit golf balls when he was 6-months-old. Eldrick was given the nickname Tiger by his dad, who had a Vietnamese soldier friend by that name. Tiger Woods first appeared on TV at age 2. He shot a 48 on a nine-hole course when he was 5 years old. He has gone on to become one of the best golfers of all times.

Many people are critical of young athletes who start their journey to excellence at a young age. Parents are often accused of pushing their kids “too hard.” Ask Tiger if it was worth it.

It can be said that there are 3 D’S of prime motivation: 1) Direction. What do you want to do in the sport? Don’t participate, continue at a moderate level, or strive to be the best. 2) Decision. Which direction do you wish to go? Your choice will determine the amount of time you must put into the sport. 3) Dedication. Once you’ve decided, you must dedicate yourself to your goal. Only by dedicating yourself completely to your direction and decision will you ensure that you have prime motivation. I think we can agree that very few people have that level of dedication. I can think of Mary Lou Retton, the great Jessie Owens, Jackie Robinson, the Williams sisters, Tiger Woods, Mark Spitz, Michael Phelps, and a rising young star named Matthew Mebane.

So who is Matthew Mebane and how can he be mentioned along side the great athletes who have paid the price to become great? That brings us to this month’s passionate motivational man. Matthew, a young man, not small by any means, developed a similar passion at a very young age. He grew up in Augusta, Georgia, where his parents had purchased season tickets to a minor league baseball team named appropriately, the Augusta Green Jackets. They frequently took young Matthew to the games, and by the age of 5 or 6, he became smitten with baseball. He started playing T-ball at age 4 or 5. He progressed to machine pitch at age 8, then he advanced to kid pitch at age 9, then to Little League. After that came all star games. Matthew has always played third base. His mom chimed in that he has a rifle of an arm. He has played in NIT (National Invitational Tournaments) where he had to try out and qualify to play. He competed in and won the 12 and under Junior Home Run Derby competition at Petco Park in San Diego, Ca. He has competed in the regional Home Run Derby competition in Atlanta three times. He has won the regionals three times. He told me that in the competition he was thrown 20 pitches. Whoever hit the most Home runs was the winner. He has played in all star games in San Diego, Marlin’s Park in Miami, and National’s Park in Washington, D.C. I feel safe in saying that this young man at age 16 has “GAME.”

He doesn’t have much time for girls but I’m sure they notice him. He is an ATHLETE. He is 6 foot, 3 inches tall and weighs 210 pounds. In the off season he is in the weight room four or five times a week. In season they cut back to two to three times per week to maintain their strength. He bench presses 220 pounds and squats 340. He runs the 60-yard dash in 6.89 seconds. He loves to steal bases. He follows his own mostly high protein diet. He tolerates school. He admits that it is not a favorite activity but he gets by with A’s and B’s and an occasional C. Many colleges are already looking at him. He is interested in North Carolina State, Old Miss, Ohio State and Cincinnati. Most of his time is spent studying the game he loves, baseball, and he declares himself a student of the game. He feels that if you don’t read about, watch and learn the “ins” and “outs” of the game, you cannot be as successful as you want to be. He studies mostly “Blast Baseball.” He frequently videos his swing and works on technique, constantly trying to increase his swing speed.

He feels his greatest strengths are his ability to study the pitchers and figure out what pitches they are about to throw. Matthew wants to know what is coming and he says you can’t be successful if you guess. He is adept at picking up the spin of the ball, and this helps him time the pitch and decide how and if he wants to swing.

What motivates Matthew? He understands motivation is the foundation of all athletic effort and accomplishment and has the desire and determination to be successful. He fully understands that to be the best athlete that he can be, he must be motivated to make the required sacrifices of difficult workouts and he must do what it takes to maximize his ability to achieve his goals.

At the time of our interview his Hilton Head High School team was 4-0. He was still batting a thousand with two stolen bases. He had a home run in his previous game.

Matthew is quietly confident in his actions. He is dedicated and determined to play in the “Bigs” some day. He is certainly worth the price of admission. If he wants it bad enough, he can make it. It will be a joy to watch his career progress. Move over Aaron Judge, there’s a new kid on the block.