A Storybook Life of Adventure

Jos Vicars has walked across the burning deserts of New Mexico, eating snakes and rabbits and breaking open cacti for water.

He’s surfed and camped for months at a time on the black sand beaches of Costa Rica. He’s strummed his guitar under northern lights, next to his fire of reindeer poop, while trekking alone near the Arctic Circle. In Amsterdam he slept on scaffolding several stories high, lugging his gear up on ropes every night because he couldn’t afford the hostels. He’s hiked New Zealand and Southeast Asia, kite-surfed and cave-dived in the wild gorges of Dominican Republic. He summited the highest mountain in Central America, 13,845-foot Volcán Tajumulco, where he ate out of the forest the whole way. By the time he reached the top he was so amped up on wild coffee berries and sick from the altitude that he got delirious and started talking to rocks.

“Sometimes I think I’m becoming feral,” says Jos, a Carolina boy who’s spent far more of his life outdoors than in. “I can sit and watch a single tree for hours. I love free-diving, and when I go camping, I bring as little as possible. I want to be laying on the ground with the hermit crabs. In nature I can find the stillness and just BE.”

Descended from Appalachian stock but raised in the Lowcountry, Jos was 8 years-old when he started sneaking out his bedroom window to spend the night alone in the forest before returning at dawn for school. By 10 he was riding motorcycles and paddling a surfboard across the creek to open ocean, and after graduating high school he walked the whole Appalachian Trail. He started college for music but never finished because he was already making a living at it, and the next several decades would be spent playing all over the world. He learned to just channel the local atmosphere—flamenco in Spain, bachata in Dominican Republic, didgeridoo in Australia, reggae at the beach, bluegrass in the mountains, or classic Indian sitar for yoga classes. Either he was at home on Hilton Head saving for his next plane ticket, or he was strolling into some far-flung bar and talking himself into a gig, a strategy that’s worked in at least 17 countries.

But in today’s world of bloggers, influencers and selfie-stick celebrities, Jos is a bit of a throwback. He rarely bothered to take photos, much less keep a journal. Sharing his experiences was not top priority—inhabiting them was. “The power it can have when you’re not trying to share it with anyone,” he says, “it’s just for you, your peace. I love those moments.” 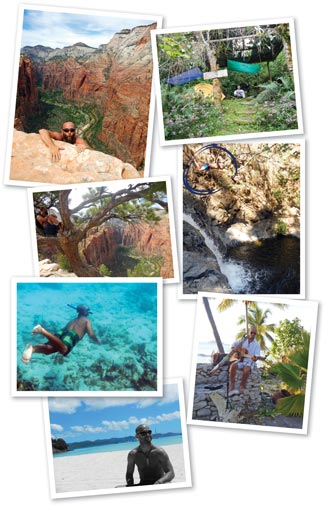 After all that solitary roaming, the vibe has changed. Three years ago, Jos married the equally adventurous Kathleen, a boat captain who’s happy sleeping beside him on the forest floor. “One day we were sitting out in a hammock in the Caymans watching a storm brew over the sunset,” recalls Jos, who had been platonic with Kathleen for 8 years. “Lightning cracked, we kissed, and it’s been magic ever since.”

The two are currently developing an eco-lodge in Western North Carolina, where the treehouses and hobbit-homes built straight into the mountain will not only let others enjoy the lifestyle they have loved so much, it will provide long-term sustainable income so they can make their travels permanent. While their guests are hiking the trails of Hickory Nut Gorge, Jos, Kathleen and their 1-year-old son Banyan plan to be circumnavigating the globe.

“This beautiful planet that we share,” says Jos, “I just want people to appreciate it and feel it’s worth respecting. Let’s tread lightly and save this masterpiece we’re living on.”

Musical roots: his mountain family are all handy with fiddles and hammer dulcimers, and he grew up playing in the Pentecostal Church with his parents

Favorite place: a volcanic heated river in the middle of the rainforest on the south slope of Volcano Arenal in Costa Rica

Favorite moment: finding a hot tub in the frozen wilderness of Norway and spending two days heating up snow to enjoy it

How he decides where to go: With friends all over the world, he just takes up invites!
For more info on the eco resort: www.innthetrees.com