Vividly Connecting Cause With Passion 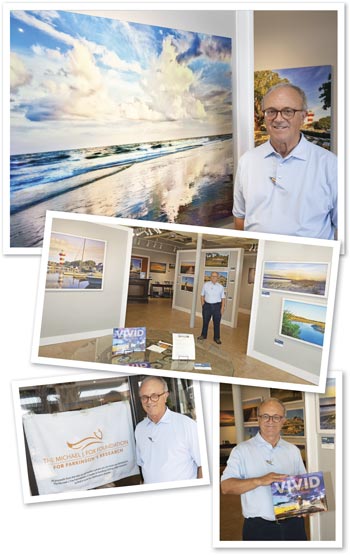 When you stroll through VIVID Art Gallery, taking in the colorful marshscapes, wildlife captures and beach scenes teeming with red umbrellas, sea oats and cumulus clouds, you probably aren’t thinking about Parkinson’s disease. You definitely wouldn’t imagine the photographer has it, considering how affably and energetically he greets you. Nor would you necessarily picture him in a boardroom closing huge deals and heading up organizations of ten-thousand people. He’s way too down to earth for that.

“I still haven’t decided what I’m going to be when I grow up,” laughed Jeff Keefer, VIVID Gallery’s founder and former executive of the multibillion dollar company DuPont. But this Ohio native isn’t your typical top-down guy.

“I’m not big on positional power and those kinds of things,” he said, crediting his parents with instilling important values. “But if people can say I made a difference, I’m happy.”

Jeff enjoyed a successful 35-year career with DuPont and retired as Chief Financial Officer (CFO). But in his opinion, our whole system should be upended so the people at the top are the ones held accountable. There should be no hidden agendas, and the “command and control” approach should be reserved for emergencies. A good leader must be able to express a vision that connects people and allows them to understand that what they’re doing is more than just a job.

“To be successful, you need engagement,” he said. “That means sitting around the table and really having a give-and-take. A good leader is really a good listener, a good teacher and a good integrator. I think you get the most robust solution when you get people involved, and involvement creates more proprietorship than just money.”

This ethos, and his wealth of experience, came into play for a much more personal mission when Jeff was diagnosed with Parkinson’s disease. Although the board of directors asked him to stay on, after a few years, he realized that wasn’t how he wanted to spend his time.
“When I was diagnosed,” Jeff recalled, “I had to answer the question, ‘If I’m not going to help, who is?’ I was relatively well-known in the business community at the time, and I had the resources and experience to act in the leadership of a non-profit. But I wanted to be associated with the best.”

The best, in Jeff’s opinion, is the Michael J. Fox Foundation (MJFF), which has raised $1.2 billion toward eliminating Parkinson’s. He values their accountability and the fact that approximately 90 cents on the dollar go directly into research. “Their mission is very clear: Find a cure and close the door,” he said. “They’re not interested in self-propulsion of their jobs.”
While serving on the board of directors of MJFF, including as its chairman, Jeff started exploring other new hobbies in his retirement, such as dabbling in video. This led to photography, which in turn led to opening VIVID Gallery as a way to contribute more to the cause. “I’m used to asking friends and colleagues for money on behalf of MJFF,” he said, “but I always felt that if I was able to give them something of value in return, that would be ideal.” Today he has raised over $200,000 by selling his photographs and donating all the proceeds to MJFF.

“People would think, given the gallery, that Parkinson’s is my whole life,” said Jeff, who thus far has managed the disease well enough with medications that he can continue to do everything he did before. “But it’s not; it’s a part of my life. Do I wish I didn’t have it? Yes, there are days that I do. But a whole lot of really great things has happened as a result of this, and overall it’s been very enriching.”

Why he’s not a big reader: “There will be time for that”… Right now he wants to enjoy being active.

Favorite way to relax: Sitting on the beach with his wife and a few other couples, enjoying conversation and beverages, a ritual they started during Covid.