Packing for the Community 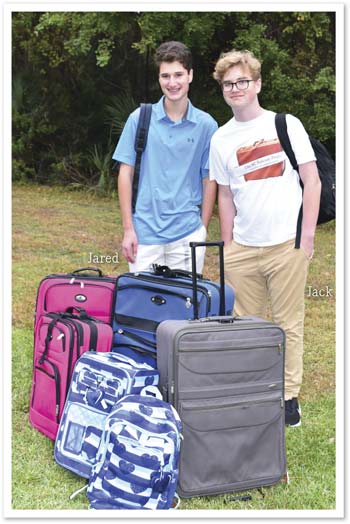 Last year, when the movie Instant Family came out, friends Jack Gigante and Jared Reuben had no clue that this movie would change their lives forever. Jared and Jack, both locally raised 16-year-old sophomores at Hilton Head Preparatory School, had an amazing idea inspired from the movie, finding an impactful way to give back to help others.

The movie’s plot is about a married couple finding themselves wanting to become foster parents. Hoping for one younger child, they get matched with a rebellious 15-year-old who comes paired with two younger siblings. Going from zero to three children overnight, the couple must learn how to become “good parents” in hopes of making a family.

The movie depicts how foster children usually carry their belongings in trash bags from one foster home to the next. This struck a nerve with Jack and Jared, as they realized how real life foster children must feel having everything they own in a trash bag. The two decided to collect suitcases to give to foster children so they their belonging no longer resembled trash.
“When being in high school, you think to yourself, ‘I’m only 15, 16 years old, what can I do to help the community?’” Jared said.  “Yeah, it’s crazy to think how much we can and have helped the community,” Jack added.

Jared and Jack’s process started by having suitcase drives and collections. They have held two drives and are making plans for another one soon. People from all over have been donating. The local churches and synagogues, like St. Gregory the Great in Bluffton, have been a big part of the drives. The boys also have the following of some family friends in Virginia and Maryland, who also have donated. Overall, they have collected more than 1,000 suitcases and backpacks.

Every year the South Carolina Foster Parent Association holds a large field day where foster children from each South Carolina county can come and enjoy a day of fun with their peers. At this past year’s field day, Jack and Jared were asked to speak about their mission and received an award of appreciation from the office of the governor. Weeks leading up to the event, Jared and Jack were loading up trucks, getting ready to attend the event to donate hundreds of pieces of luggage. They stumbled across a suitcase monogrammed with the name Teddy. Thinking it would never find a home because of the embroidered name, Jack still loaded it in the truck. When they got to the event and began handing out suitcases, a little boy around age 5 was standing in line with his foster mom. When it was his turn to get a suitcase, Jack asked the little boy what his name was. When the child told him, Jack was lost for words. “My name is Teddy,” the little boy said. Jack jumped in the truck, grabbed the case with the name embroidered on the front. “I’ve been waiting for you,” Jack exclaimed.

The little boy was incredibly shocked they had a suitcase just for him. It was a spark of pure magic, and from then on Jack and Jared not only saw the difference their suitcase initiative was making, but deeply felt it, too. They have loved the feeling of giving ever since and plan to continue this project throughout high school and with hopes for it continuing into the future.

Jared and Jack’s project helps children throughout South Carolina. It was a rare moment that they were able to personally handout suitcases to children at field day. The suitcases are usually given to the SC Department of Social Services to be distributed.These two saw a need and did something about it. When becoming good friends in second grade, they never imagined they would one day make such a difference together for other kids.

More about Jack: He is a member of the cross country team, chess team, baseball team, quiz bowl team and a part of the drama club.

Donate and Support: Do you have a piece of luggage you no longer use? Log on for more information about Jack and Jared’s SC Suitcase Project: www.TheSCSuitcaseProject.com