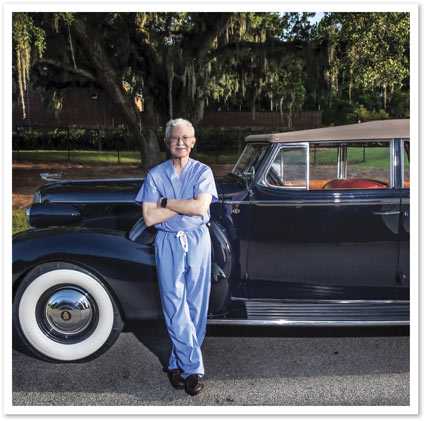 Have you ever met someone who radiates positivity, has a quick wit, and who simply oozes joy? Dr. Ronald Finger is a people-person whose optimism and authenticity has fashioned a people-magnet. He has a zest for life, and his driving force is his motivation to not only give 110%, but to live 110%.

At 81 years young, he says he is not even close to retiring from his plastic surgery practice, Finger & Associates, where he still gets 20-25 new patients each week. “Why would I retire from having fun?” he asked.

“I’m addicted to making people happy. I get great satisfaction when my clients are excited with their outcomes. It’s contagious. I feel like I’ve done some good. I have a lot of empathy in my relationship with my patients, and my work lets me know that I can change lives,” Dr. Finger said.

The two biggest kicks in his life come from plastic surgery. “The first is science,” he said. “I study and read a lot. It’s exciting to soak up new stuff that is effective. The second kick is seeing people who have lost confidence, who lost their looks and have little self-esteem so happy with the change—not just with their looks but with their personality.”

Ron grew up in a small, rural South Carolina community, where his father was a country surgeon. There wasn’t a hospital for his patients, so his father built his own and added on to it over the years until there were about 40 beds. At only 14 years of age Ron’s medical career began as his father’s surgical assistant. “Surgery was the only thing I knew, so I adapted. It was normal, automatic, like ducks going in for a swim. My mother was a musician, and an artist, too. She was the one who told me to do my residency in plastic surgery. She said it would be more creative and give me more fulfillment.”

Another of Dr. Finger’s passions is car racing. For more than 25 years he raced as a semi-pro on Porsche, BMW and Mazda teams. He ran races the same way he performs plastic surgery—with precision.

“You have to pre-plan for a race just like you plan for surgery,” he stated. “At night I’d go over every detail, thinking about every step and imagining every single movement. You have to plan every detail. Set your goal. Then focus! To do it well, you must focus and understand that every detail is critical—if you want to win, that is. If you just want to be in the middle of the pack, it really doesn’t matter. I was racing against myself, and if I saw flaws, I’d work on them because I wanted to do better. If you do the best you can, you win.”

Dr. Finger said that what makes him tick is “being a very positive thinker. I have a lot of energy and try to focus it in positive ways. I’m also in competition with myself to be healthy and productive. It’s fun to be competitive because it gives me a reason to live, and I’m trying to live a long time! My friend once told me that if the two of us fell off the Empire State Building, I’d try to beat him to the ground.”
His partner, at home, at work, and in life, is his wife of 47 years, Cheryl. His “easy secret” to marriage is to think less about yourself and more about others. “My wife is at the bottom of her own priority list, but at the top of mine. If everything was taken away, and I still had Cheryl, I’d be happy. We balance each other. Cheryl is really organized and left brain. I’m really disorganized, artistic and right brain. So, together we have one brain! After work I can’t wait to get home and gab with my wife.”

Dr. Finger’s advice for a fulfilling and successful life is simply this: “Like what you’re doing, and pull your load. Don’t expect something for nothing. You must have incentives to work and produce. No entitlements. When people tell me, ‘Doc, you’re so lucky,’ I tell them, ‘Yeah, the harder I work, the luckier I get.’”

Up Close:
Only Child: Ron and Cheryl’s daughter, Mandi, has a PhD in environmental genetics and is on staff at the University of California.

The Cat’s Meow: Their two other “children,” Molly and Sadie, are domestic shorthair cats from the Humane Association.

The Power of the Pen: Ron wrote a book about 10 years ago called Why Grow Old?  “It’s an anti-aging, look good, feel good bible!”

Aww Shoot: Ron loves to go to the gun range to shoot, and he used to compete in Glock championships.

Workin’ It: Dr. Finger is committed to exercise and still does both aerobic workouts and strength training with weights.

A Legacy: Dr. Finger completed his residency in plastic surgery in the U.S. Air Force, served three years, and then opened his practice in Savannah, GA, in 1970.