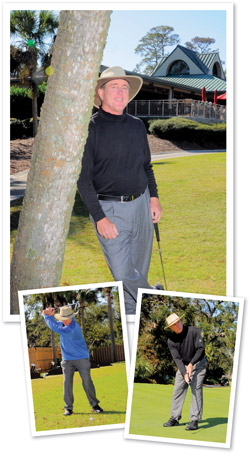 It has been a life-long journey for Doug Weaver to become the very best he can be at the game of golf and to inspire others to do the same. Doug is a nationally acclaimed golf professional, who currently serves as the Director of Golf Instruction for the three golf courses in Palmetto Dunes Resort. His love affair with golf began when he moved to Hilton Head Island as a 17-year-old prep athlete to attend Sea Pines Academy. After college, he founded the Hilton Head Island Intercollegiate Golf Tournament at Palmetto Dunes. This tournament grew to become the Golf World Intercollegiate, one of the largest collegiate tournaments in the country. Doug got his first break in 1987. He took his first title at the Zell Wood Country Club Open, went on to win 15 mini tour events and gained his PGA Tour card in 1988. He toured for seven years and then came back to the island to share his talents locally.

Doug has always been inspired to give back to his community. He became a local celebrity, hosting a weekly TV show on Hilton Head Island for 12 years. An avid supporter and volunteer for the Special Olympics since 2008, Doug has touched many lives with his coaching and encouragement to prepare them for local, state and national competitions. Many developmentally disabled athletes who Doug coached now proudly display the medals they have won. There have been several South Carolina champions, as well as five, second place National champions.

Doug has also been actively involved with the Boys and Girls Club for many years, providing golf instruction to students at the Robert Trent Jones Golf Course at no charge. They are exposed to a resort golf course, learn about potential career opportunities, and develop confidence in golf and the golf environment. Doug was instrumental in helping to create the local First Tee organization in 2015, in cooperation with the national PGA, which included building an actual golf course behind the Boys and Girls Club on Hilton Head Island. Here students can learn new skills and experience the joy of expanding confidence in the game, which carries into other aspects of their lives.

The Boy Scouts of America hold a special place in Doug’s heart, too. As a boy, he earned Eagle Scout status and wants others to be able to do the same. Since 1996 he has offered the training required for Boy Scouts to earn the golf merit badge. In addition to all of this, he has coached golf at all three high schools on Hilton Head Island, and served as head coach for many years. He is deeply involved in the Fellowship of Christian Athletes, an organization that provides a week of free instruction in seven different sports during the summer. And, since 1993 the Hilton Head Island Visitors and Convention Bureau has relied on Doug as a PGA professional to be a spokesperson, clinician, instructor and entertainer for sales representatives interested in bringing meetings and groups of visitors to the island.

The “Golf Whisperer” is an accurate and well-deserved title of acknowledgement bestowed upon Doug several years ago. He has an intangible understanding of the essential elements of success in golf and of what’s going on in a golfer’s mind and heart. "It’s about getting a person “freed up” to be the best they can be—connecting the right brain with the left-brain. Golf is a game of artistry and mechanics. I can see into people, why they underperform and then help them overcome their obstacles.” Doug’s goal is to help students (of all ages) develop a consistent and natural swing, max out their driving distance, eliminate their slice or hook, achieve perfect timing on every swing and gain complete control over the golf ball.

Doug received national awards from the PGA President’s Council on growing the game for six consecutive years (2005-2010). US Kids named him a “Top Kids” Instructor in 2011. He earned the coveted “Teacher of the Year” award by the Hilton Head Island PGA in December 2012. Golf Digest named Doug the No. 2 Golf Instructor in South Carolina in November 2015—he is frequently ranked in the top 10. Doug has also authored several articles for Golf Illustrated Magazine and was inducted into the Low Country Golf Hall of Fame last April to take his rightful place with local golf greats on the walls in the Sea Pines Resort at the Sea Pines Shopping Center.

Doug Weaver is an inspiration to everyone whose life he touches. He teaches people they can take something difficult and make it easy, while reminding us all to learn to relax and trust the process.

Motto: Swing fearlessly. Lower your handicap. Enjoy the game for a lifetime.

Exhibition: Sign up for a complimentary golf clinic and exhibition with Doug on Mondays at 4:00 p.m.

Contact: For information about clinics, classes, lessons, and on-course instruction call Doug at 843-338-9598, log on to www.palmettodunes.com/golf/hilton-head-golf-lessons or email Doug This email address is being protected from spambots. You need JavaScript enabled to view it.