A Passionate Life of Service 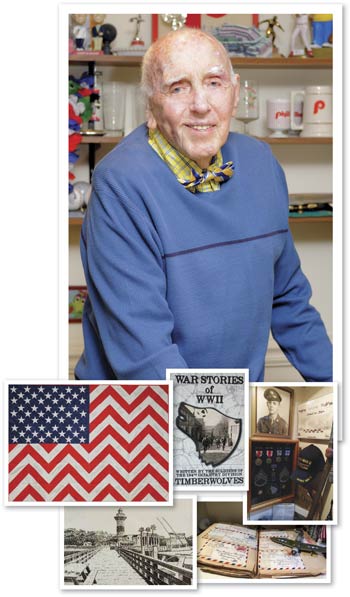 It was my great honor and privilege to meet and interview our February Motivational Man, Dick Rigler. The 94-year-old veteran of World War II is a tall handsome fellow with an engaging smile, sparkling eyes, and a quick wit. His visual impairment and walker don’t compromise his zest for living. He has gathered bushels of memories throughout his life.

The first memory he chose to share is one that indelibly shaped his life. He was a mere 18-year-old boy when Uncle Sam summoned him in April of 1943. As a member of the 104th Infantry Division, Dick experienced his first battle in Holland, after which he marched with his troops through Germany and met up with the Russians just south of Berlin. He saw front line combat in Germany and witnessed several of his army buddies killed. Dick recalls: “We were babies when we crossed the Roer River. I was a combat engineer, and it was our job to take the infantry safely across the river in rowboats before dawn with 11 mph river currents.”

Dick’s most poignant memory is Christmas Eve 1944. After the sounds and flares emitted from enemy artillery cannons aimed at destroying a bridge, there was an eerie silence. Soon after, faint voices singing Christmas carols could be heard from a church across the river. “How absurd that in this war ravaged area, while facing the enemy, proof appeared that both sides had a love for the same God and were celebrating Jesus’ birth,” Dick said.

Dick recounted memories of numerous spine-chilling experiences during his army career, and he self-published a book titled War Stories. Excerpts are included in a hardcover book also titled War Stories, by Kathy Clark, the daughter of one of Dick’s fellow soldiers.

When Dick joined the Army he was initially sent to basic training then to a six month specialized engineering school at NYU in New York City. On weekends off he would return to Philadelphia to see his parents and go roller-skating. On one of his weekend skating excursions, Dick became instantly smitten by Marge, a charming young woman from Wilkes–Barre, who skated in a unique style that matched his. The rest is history. He sent a letter to her the next day and 298 letters after that, while he was on active duty. He treasures the scrapbook she made of all his letters. Dick and Marge got married on July 14, 1945 while he was on furlough. She followed him to his next assignment in California, and the couple returned to Philadelphia when he was discharged in December of 1945.
Dick returned to his father’s company, Rigler Manufacturing, which produced centrifuges for the sugar cane industry, used to extract sugar cane crystals from molasses. These machines were primarily sold to companies in Central and South America. After his father’s retirement, Dick continued to operate the company until 1992, when he moved to Hilton Head Island. During their time in Philadelphia, Dick and Marge were dedicated fans of the Philadelphia Phillies.  They were season ticket holders for 17 years.

Sadly, Marge died in 2004. They were happily married for almost 60 years. Dick has adjusted to living alone in their home they built in 1992. There is a large room filled with memorabilia. The first thing you see when entering is an exquisitely quilted American flag made by his daughter. He cherishes the display on his wall of several autographed bats and photographs of his favorite Phillies players. He has a professional-sized pool table in the middle of the room, where his family and friends gather every other week to play. Although Dick’s eyesight no longer allows him to compete, he looks forward to the camaraderie and laughter. Dick also proudly displays some of his artwork, which features a technique called stippling, drawing with small dots. The images resemble black and white photographs. He has sold many over the years in local art stores. In another room, Dick displays his war medals, a map of the route he marched during the war, books of war stories, the scrapbook of his letters, a diploma, a framed photograph of himself as a young soldier, two Nazi war helmets, a captured Nazi flag, and his WWII veteran baseball hat.

Although it has not been easy living by himself for the last 14 years, Dick maintains a cheerful attitude and is grateful for all life’s blessings. His memories and memorabilia keep him company, his family members visit regularly, and his caretakers attend to his daily needs and take him on outings. A devout Christian and dedicated member of Hilton Head Presbyterian Church, Dick served as an elder and treasurer for many years and is now an elder emeritus. Worshipping at the service each Sunday morning is the highlight of his week. “I can see how the hand of God has had a plan for every aspect of my life.”

Up Close:
Most Grateful For:  My Family.  Daughters: Robin and Cindy. Grandchildren: Chris and Geoff. Great grandchildren: Rocket, Ella, and Juliana
Inspired by: My Faith “The Lord is My Shepherd”
Enjoys: Listening to popular music from his era, such as The Mills Brothers and The Ink Spots