Reelin’ it in for Three Generations 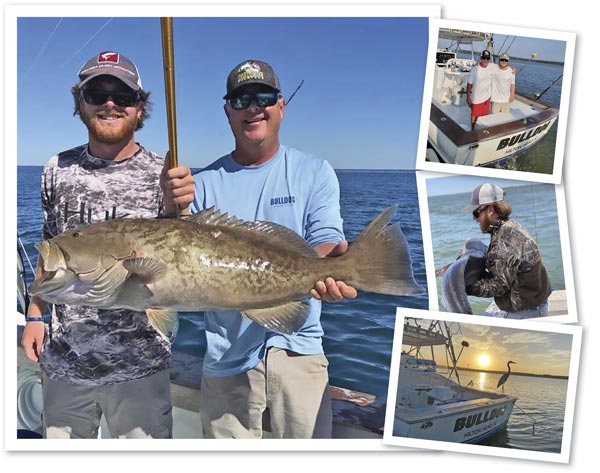 Growing up in the Lowcountry of South Carolina is nothing but an amazing privilege. From seeing dolphins playing in the sound in the mornings to breath-taking sunsets on any given day, the Lowcountry is special. What makes it even more special are locals like Christiaan and Stratton Pollitzer, who care, build, and offer their stewardship to our close-knit community. With both father, Christiaan, and son, Stratton, born and raised in Beaufort County, their roots run deep here, and their love for it, even deeper.

Christiaan was cast into the fishing charter business when he was in high school—his father running a boat called “Hero” out of Harbour Town Yacht Basin. After high school and college, Christiaan took everything he learned from his dad, earned his captain’s license, and became a second-generation professional charter boat captain and fishing guide. He worked for Ford Plantation for 10 years before landing a boat of his own, “The Bulldog,” now coming up on season 12, chartering mostly out of the north end of Hilton Head Island.

With business booming, Christiaan had more work to get done than hours in a day. Stratton was first up to bat, since he’d been his dad’s shadow since he was 12 years old, about the same year he fell in love with the craft and its surroundings. Watching his dad work his magic with the fish and charter guests, Stratton didn’t hesitate to get his feet wet in the footsteps of generations before him.

From high school age, Stratton worked every summer on the boat, being first mate and helping anyway he could. When he turned 18, the moment came; he went to sea school and came back an official captain. He started running charters in 2019 with a mate, using all of the skills and techniques his dad taught him. “The fishing is 20 percent of the experience. Entertaining the people on your charter takes up the other 80 percent. You keep your passengers happy. You have a successful day,” Stratton said.

And making people happy they do for both serious and recreational fisherman. With the stories they have under their belt, tourists are in awe, and locals believe every word. “Every day is different, but what it boils down to is it’s simply just fishing,” says Stratton.

“Exactly, we can’t control the fish, or the weather, we can only control our effort,” Christiaan added. With stories that include battles with an 1000-pound tiger shark, massive tarpon and cobia reeled in while on charters, people are sure to be intrigued.
“Stratton is best with the kids,” Christiaan smiled.

“Some kids have never even seen the ocean, let alone been on a boat,” Stratton said. “The first time they catch a fish, that’s one of the best moments of any trip. They freak out, and you just got to freak out with them. Makes them feel so accomplished and proud.”

“If the kids are happy, the parents are happy, and then we have customers for life. Every parent says their kids refuse to talk about anything else for weeks after vacationing with us,” Christiaan laughed.

Last summer, none of the charter captains knew what to expect with COVID-19. Locals and other charter captains all jumped in to support each other. However, summer 2020 ended up being the busiest summer of their careers since the Gulf Oil spill in 2010. They offered 2-,3-, 4-, 6- and 8-hour chartering trips, all completely booked. With such a close cluster of local fishing captains and charter companies, there is slight competition, but they all help each other, no matter what. If fish are biting in a particular area, usually the captain who found it will radio others about the location. The same thing will happen when trying to find fresh bait in the mornings before their trips.

“…At the end of the day, we just need people to be happy for any charter, not just ours. This is what makes people come back every single year bringing business to the island,” Christiaan says.

Both Christiaan and Stratton have fished these waters long enough to know when and where the fish are biting based on the time of year. This makes their passengers excited to board and go fishing! With sharks and tarpon being the top of the charts during the summer, it is the number one time tourists go out. In March, sheepshead rule the cast. April and May consist of a lot of cobia, and in the fall, bull redfish are lead.

Chartering their trips off the docks of Hudson’s has incredible perks all around. Charter guests can literally take their catch right out of the boat and deliciously have it prepared at Hudson’s Seafood House on the Docks. “About 75 percent of our trips bring the fish they caught into the restaurant to be cooked, and if not, usually they’ll grab a bite to eat and drink before they head home,” Stratton said.

Their newest adventure is a 1985, 29-foot Blackfin charter boat given to them by Dave and Jeannie Harter. It is currently in Ridgeland being restored and repowered. Stratton will be the permanent captain of this boat and plans to ride side-by-side next to Christiaan when the summer season begins. This would allow them to double the charters, which means double the fun and fish!

Christiaan and Stratton are fisherman and stewards of the waters – local men who care about people—pure salt of the earth. Father and son at each other’s side, they are living their legacy, sharing it with all who want to experience what the glorious Lowcountry has to offer out there on the big blue sea.

Like father. Like son. Christiaan and his father were born in the same room at Beaufort Memorial Hospital. Christiaan attended Hilton Head High School and graduated in 1989. Stratton graduated from the same school 30 years later.

Gone Fishin’: To book a charter with Christiaan or Stratton, log onto bulldogfishingcharters.com or call 843-422-0887.