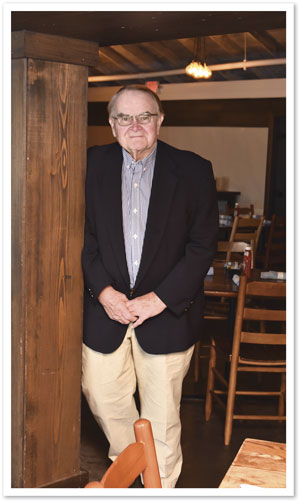 Two decades ago, Allan La Coe’s eye fell on a newspaper article written by Betsy Doughtie, then-director of the local nonprofit Deep Well. What he read was to inspire one of the most worthwhile projects of his life.

“It said ‘Lonely locals have nowhere to go for Thanksgiving,’” recalls La Coe, Hilton Head resident since 1995. “This is an aging community, so some of them might have been people who were going through their first holiday after the death of a loved one. I called Betsy and said, ‘What can we do about this?’”

La Coe and several other concerned parties met with Deep Well to brainstorm ways they could help. One of them was Brian Carmines, owner of Hudson’s Restaurant, who said they always closed on Thanksgiving and offered the use of his restaurant for a community dinner. La Coe and his wife Gloria immediately mobilized to action, securing funds from their congregation at St. Andrew By-the-Sea United Methodist Church. Over 300 people were served free of charge that first year by 200 volunteers, and the Annual Thanksgiving Community Dinner has since grown to host 1600 people with the help of 400 volunteers. Nothing short of a local institution, it features live bands, a bonfire, trivia with prizes, a visit from Santa distributing gifts, and of course fine food and fellowship. The dinner is free and open to all, but those who wish can donate, and the proceeds go to organizations like Deep Well and Bluffton Self-Help. The bountiful leftovers are collected and distributed by Second Helpings so the expansive number of people fed by this event is unknown.

“After 20 years it’s a well-oiled machine,” says La Coe, who has been involved every single year since the inception. “Two reasons for the event’s lasting power are Hudson’s and consistent funding from the church, because every year we know where it’s going to be and how it’s going to be paid for.”

Part of the charm is that the meal is served family style, so you never know who you’ll wind up sitting next to. Over the years people have suggested changing it to a buffet, but La Coe and other organizers have resisted this in order to keep it friendly and inclusive. They place a host and hostess at each table, give everyone a name tag and encourage them to write where they are from. One year they had folks from 39 states and 11 foreign countries.

“We want you to feel like you’re sitting at grandma and grandpa’s table with your favorite aunt and uncle,” says La Coe. “We keep bringing out platters of turkey, ham, mashed potatoes, collard greens, different kinds of pies, banana pudding—you name it—until they say they don’t want anymore. The conversation is lively and it’s a very festive event.”

This year, quite appropriately, La Coe’s birthday falls on Thanksgiving. “Occasionally this happens,” he laughs. “When I turned 70 the paper did a story about it and now everybody knows how old I am. I just say I’m celebrating with 1600 of my closest friends.”

Originally from Northeast Pennsylvania, La Coe’s career in home furnishings brought him to Atlanta, and eventually to Hilton Head, where he and his family had been vacationing since the early ‘90s. In addition to the Thanksgiving Dinner, he’s been involved with the Boys & Girls Club, the Children’s Center and church missions; he has been volunteering so long that kids he once served are now showing up with little ones of their own.

“When I was in my 50s I was busy with a career, and I didn’t have the time,” says La Coe, adding he never begrudges anyone who’s not in a phase of life where they are able to volunteer. “But when I moved here I decided there was more to life than getting on airplanes and opening furniture plants all over the country. When I’m done I don’t think I’ll be remembered for sofas and chairs, but maybe I’ll be remembered as the guy who started the soup kitchen. This is such a giving community; people have a chance here to do things that bring meaning to their lives. You look back and see you made a difference.”