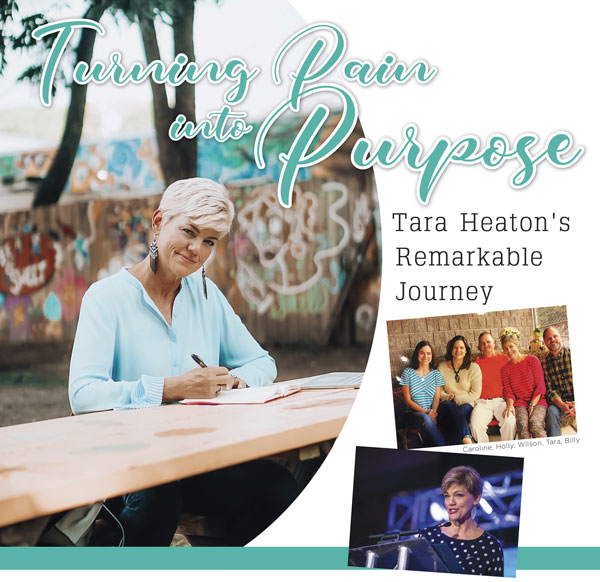 It would be so easy to crumble under the strain that Tara Heaton has been through. Human hearts crack or grow embittered, and a broken spirit does not mend at the hospital. But to live joyfully despite all these outside circumstances, to turn pain into power and purpose—that is a feat we all have the potential to achieve.

“It sounds fluffy, but every day I try to choose joy,” says Tara, founder of En Pointe Communication in Atlanta. “I’ve cried like you wouldn’t believe and had days where all I wanted to do was throw glass at bricks. But I believe that each one of us is extraordinary, not in spite of our challenges, but because of them.”

Tara’s remarkable journey began in 2005, when life seemed to be cruising along. She was happily married with three beautiful, healthy children and her business was taking off. Then one day her 12-year-old daughter, Caroline, missed school with what seemed to be a little virus accompanied by a rash. Tara had stayed home to care for her, when suddenly a mother’s intuition compelled her to go check on her daughter—next thing she knew she was not walking but running up the stairs. She found Caroline unresponsive, and a moment later Tara was witnessing a full-blown epileptic seizure for the first time in her life. Sadly, she was to see thousands more over the coming years.

To this day doctors have been unable to identify the virus that went into Caroline’s brain, causing inflammation and putting her in a coma. When she woke up she was never the same again; seizures were happening daily, making her crash down all over the place and ultimately resulting in permanent brain damage. At first her friends at school rallied around her, but as Caroline declined, she started getting bullied mercilessly, and doctors just couldn’t make it right. Today she is 28, holds a special education diploma and lives under the devoted care of her parents.

“We were just watching her little brain get chipped away at,” says Tara, who took Caroline all over the country for treatment without finding answers. “We do everything to give her joy, but she’s slipping away. She loves the beach, so we took her to the coast last year for her birthday, but a month later she had no recollection.”

The devastation of watching Caroline deteriorate took its toll on the whole family. Her little sister, Holly, was 10 at the time and had to grow up seeing everything she wanted to do overshadowed by her sister’s needs. Their big brother, 14-year-old Wilson, did all he could to take care of Caroline, but internalized the pain. “Wilson had this spirit about him,” Tara explains, “and still does today, of saying ‘I’m fine, I want to help.’ But all this left scars. When Caroline started getting bullied, he started getting in fights. Then he discovered alcohol at a young age. He rode bulls, played rugby, was into girls—anything to get that adrenaline rush that would help him avoid the pain.”

Admittedly, Tara was so busy caring for Caroline and running her business that it was hard to keep track of what Wilson was up to. By 2012 his drinking had become such a problem that Tara asked him to find another place to live. Not long after, he was driving home one night and hit a pedestrian, a young lady about Caroline’s age. In a twist of cruel irony, she suffered horrible brain damage that left her in a condition similar to Wilson’s own sister. He was sentenced to ten years in prison.

“I don’t make excuses for Wilson, and I’m certain that prison saved his life because I could not convince him he had a problem with drinking,” says Tara, adding that while most parents would view this as the ultimate failure, she does not. “We believe he will come out and do great things because he has completely transformed himself. He’s still the same loving person he always was, but he knows he can never drink again. And he has learned to deal with the pain. That’s what we’ve all learned—that pain is undefeated. You have to let it in to let it out.”

This is one of the central themes of Tara’s experience: the necessity of facing pain and making it a catalyst for positive growth. While incarcerated, Wilson has taught himself Spanish and trained to become a firefighter. He journals, meditates every day, does yoga and is extremely fit. “None of this is thanks to the Georgia prison system,” remarks Tara, “which from what I can see only turns out more savvy criminals. He’s done it entirely on his own.”

There’s yet another thread to the story. When Caroline first started having seizures, Tara had to sleep with her while her husband Billy stayed in another room. This was the beginning of the end of their traditional marriage, as circumstances forced them to become like roommates. But one day Tara found reason to believe that Billy might be gay, so she confronted him in an open conversation. Today they are divorced, and both have new husbands. But they are still the dearest of friends—and most importantly, still a family.

"I believe that each one of us is extraordinary,
not in spite of our challenges, but because of them."

“We’ve all come to be open and accepting,” says Tara, who shares care and custody of Caroline with Billy, “to love each other and cherish what we have, probably more so because of all we’ve endured together. He didn’t trick me, he had just fought off his truth because of where he lived and the way he was raised. But as you get older, your truth grows stronger. That’s another lesson we’ve learned: to live our truths. Not to be ashamed by circumstances in our lives, whether we caused them or not, but to just be ourselves. Everyone has a painful journey; we all have our own novels. But if you don’t share your story, that doesn’t invite deeper relationships.”

It must seem so long ago that Tara begged a well-respected neurologist in vain to find out what was the matter with her daughter. That in desperation she asked doctors to take Caroline off the seizure medications that were having horrible side effects, only to get crushed by the answer NO. “That day sparked my lifelong study of the brain, neuroscience and human behavior,” says Tara. “I have been a warrior because I believe if we don’t have a disability, we have a responsibility. I have a duty to my family to make this suffering matter by sharing our story, inspiring other people and letting them know they are not alone. That way they can live their truth and be proud of it.”

The power of her own story, in tandem with professional expertise and thousands of hours of scientific research inspired by her daughter, has given Tara a new mission. Through En Pointe Communication, she employs decades of sales and corporate presentation experience to act as what she calls a “message strategist,” helping clients develop “purpose, momentum and impact” for success in their own businesses and passions. The methodologies she’s developed are crystallized in her book, Talk to the Brain, as well as in her blog, coaching and dynamic public speaking. Tara is one of those rare and fortunate individuals who combine career, passion and altruism to succeed on every level.

“Each of us should use our talents to make the world a better place,” she affirms. “I’ve been able to help people grow their confidence in their unique gifts and what makes them valuable in the marketplace. And I’ve been studying the brain since 2005, so not only do I share lessons, but through all this neurological research, I can offer scientific techniques to live better today. How to deal with anxiety, depression, fear and pain—I leave people with actionable takeaways to elevate their lives. I could focus on everything I’ve been through, but instead, I need to go out and bring someone joy.”