HomeFeaturesMake Your Vacation Last Longer— Your Body, Too

When Women Say YES to Life! 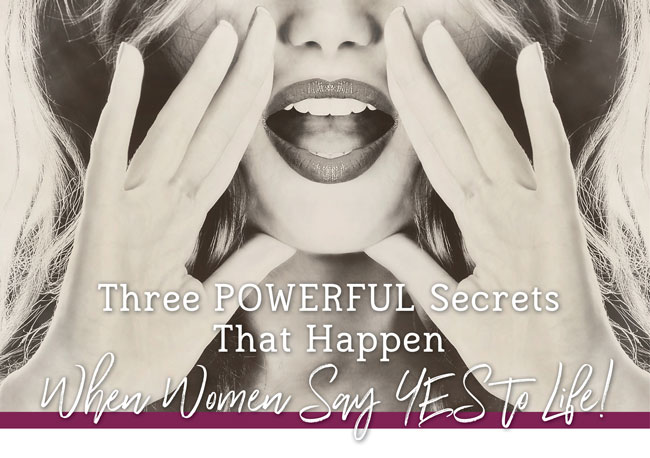 More than anything else, my greatest hope and intention for this article on female empowerment is that each and every person reading it will choose to show up and say YES to YOU.

YES to that inner voice—the voice of intuition. YES to your life force and universal energy that is calling you to perhaps follow that crazy idea, move across country, start a painted furniture store business, to committing to that kickboxing program. YES because you are the only YOU that you have, and you deserve it; YES because there’s no one who can do it for you; it’s truly up to you.

When I moved to live the island life, I had to learn to “hatch out” of my former workaholic self, out of living life on the California freeway, and out of the hamster on a wheel syndrome. This meant saying YES to my new self and my new surroundings, and recognizing that change is not an event; it’s a process. By saying YES to my new life, grace unveiled itself, ease and acceptance happened, and fear turned into courage.

The first week I arrived on the island, I went off to the beach, no writing, no social media, no cell phone; just taking it all in. I went out with friends and danced with several men and even had a fun date with a special guy that very same week. (That’s saying a lot for a 12-mile island; it certainly doesn’t happen here every day.) Point being: Change is good, and when you say YES, magical things happen, doors open, and you show up to love YOU.  Giving myself the gift of a little R & R, enjoying nature, feeling the sand between my toes, watching the dolphins swim joyously, and celebrating the joy that springs from within was so incredibly empowering for me.

What brings you joy? Say YES to that!
Here are three secrets of empowerment I hope will help as you set off on your journey of claiming (or reclaiming) your power and discovering the beautiful, glorious, feminine, and divine woman that lives inside YOU!

Secret #1 Hit the Reset Button.
Wake up every day knowing something good is going to happen. Take a chance on you and risk getting what you actually want. Have absolute total and positive belief in the calling and vision that stirs inside of you and don’t hesitate.

Case in point: When Carol, a client of mine, called me one day, her life was crumbling. Her high-pressured job was pulling her in a thousand directions, she was the primary caregiver of her ailing father, and she had just discovered her husband was cheating on her. It was clear Carol is a powerful woman, and that it was time for her to take her power back and hit the reset button on her life.  We prioritized with focus on Carol’s desires, rather than her fears. Carol’s priorities became crystal clear, and resistance to what was happening in her life disappeared. With proactive steps, Carol jumped back into her life, and in just a year, she moved on from her marriage, turned her home into her Zen, created harmony in her workplace, and began writing her first best selling book on caring for the caregiver.

Secret #2 Believe and Receive.
Imagine you are sitting at a table with four other people. Your Higher Power (God, the universe, whatever works best for you) hands you a bowl of oranges. There are four oranges in the bowl and five of you sitting at the table. What do you do with the bowl of oranges? Write down the first thing that comes to your mind. Perhaps you are thinking how you might split up the oranges, or maybe you just take one and pass the bowl. It probably doesn’t occur to you to keep the entire bowl of oranges; they were given to you from your Higher Power just for you. ALL of them. This is receiving as a reflection of your self-worth. To feel fully deserving, you must keep the entire bowl of oranges for yourself. Period. You are replenishing yourself, and this has nothing to do with those around you or about sharing. This is about you taking loving care of you because you deserve it!

Case in point: I was visiting with a very gifted writer, who shared how upset she was with her current life situation. Sarah had financial worries because little business was coming in, and she was also having financial disagreements with an ex-husband, who owed her money. My feeling upon listening to her situation was she had succumbed to accepting this situation for far too long, which had dimmed her inner light. She surrendered to believing this was how it was going to be for her and was ready to spend her time in counseling to figure it all out. I asked her to try the orange bowl exercise with me before we did anything else. She was willing, and indulged in the process with nothing to lose. About two months later, we touched base. She was the happiest I had seen her in a long time, and she had more business than she could manage, all of which had come out of the blue. In addition, she and her ex-husband had finally arrived at a financial agreement. Sarah, who had once felt powerless, had taken all of her power back. A new belief system had grown inside of her, and she was now the architect of her destiny and no longer a victim of what she had once believed were truths.

Secret #3 You Are Enough.
When you put yourself first and decide to say no to your ego and to your own negative internal dialogue, you relinquish the need to control, the need to be approved, and the need to judge, because you know that you are enough!

Today, say YES to YOU.

Jackie Ruka, Author of Get Happy and Create a Kick – Butt Life, is a success coach who enjoys helping women skyrocket to lives they can truly love!  Read more about Jackie at www.gethappyzone.com.