Stepping Back in Time - The Ashantilly Center 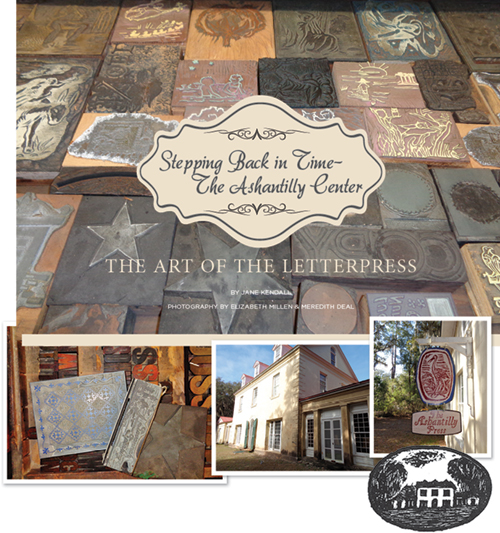 Are you looking for a new and totally different adventure? If so, this is the destination for you! A little off the beaten path and just a short road trip away lies the Ashantilly Center in Darien, Ga. As you drive onto the 18-acre property, you can’t help but feel transported into another era. Ashantilly was built circa 1820 and was the mainland residence of prominent antebellum planter Thomas Spalding. It was partially destroyed by fire in 1937 and has been somewhat restored by William G. Haynes Jr., its last private owner.
In 1993, the Haynes family donated the property to the Ashantilly Center Inc. to create job training and a community center for the people of coastal Georgia. Harriet Langford, the organization’s president of the board of directors, recently gave several of the Pink Magazine staff a tour of the residence and provided us with information about its reconstruction after the fire. She also showed us a voluminous array of books and fine art prints crafted by Mr. Haynes.
Have you ever wondered how books and other reading materials were printed in previous centuries? Although movable type and paper first appeared in China, printing first became mechanized in Europe. The invention of the printing press was derived from the medieval paper press, which was modeled after the ancient wine-and-olive press of the Mediterranean area. A long handle was used to turn a heavy wooden screw, forcing downward pressure against the paper, which was laid over the type mounted on a wooden plate. Johannes Gutenberg was the most renowned person to utilize the printing press in the 15th century. This type of press was used for more than 300 years.
In the 18th century metal presses began to appear. By the 19th century power-driven cylinder presses, used predominantly in the newspaper industry, could produce up to 8,000 sheets in an hour. At the start of the 21st century, offset lithography had become the most widely used printing method for books, newspapers and magazines. Printing composition became totally revolutionized with the invention of computers. Then along came print on demand, a new electronic printing method, to compete with offset printing. The letterpress had become an obscure, almost unknown art.
The Ashantilly Press was established in 1954. After attending Cooper Union in New York City to learn the art and science of printmaking, Haynes returned to his hometown in Darien to begin his printing career. Three different letterpresses and an outstanding array of print block and type trays are showcased in the outbuilding on the Ashantilly property. Two of the presses date back to the 1930s: One is a motorized large bed Vandercook press, the other is a Chandler Price press, operated by a foot treadle.
The lightest and newest portable press was recently acquired for the staff to demonstrate printmaking at schools and events. Sara Blocker and Cathy Nix, the devoted volunteer letterpress operators, explained and demonstrated the process for us. A printing press transfers images and letters to paper using ink. The symbols (made from hand carved blocks of wood or linoleum) and the metal letters (individually arranged and held in place on a tray) are mounted into the press with impeccable precision. Then the operator uses a brush to spread ink onto the circular press plate. By using the foot treadle, the operator moves the rollers over the plate to cover them with the ink. Then she carefully aligns the paper. As Sara pumped the foot treadle, the press squeaked and grinded as it deposited the ink on the block carved with the image of a heart and the letter tray, which spelled out “We Love Ashantilly Press.” Then it pressed the letters and block against the paper to make beautiful notecards for each of us.
Although the technique is antiquated, there is a modern day resurgence of interest in boutique letterpresses. Art schools are now offering classes in both letterpress and book arts. The craft calls forth artistic design talents and a great deal of patience in the letterpress operator, likened to a focused meditation of sorts. Recently, the Ashantilly Press had the honor of being one of only three print shops in Georgia to be visited by Chris Fritton, “The Itinerant Printer.” Chris is traveling the country throughout 2015, visiting privately owned letterpress print shops and producing unique prints at each venue culled from their idiosyncratic collections of wood type, metal type, cuts, ornaments and polymer plates. The project intends to capture the spirit of the revival and will culminate with a coffee table book that will feature photos of the prints, print shops and people from the adventure.
Imagine the satisfaction you could experience by designing and pressing your own note cards and business cards. The Ashantilly Center offers classes and workshops several times a year for training in letterpress operation. Tours of the residence, grounds and letterpress building are available by appointment. Go see what discoveries are waiting for you at the Ashantilly Center!

"Although the technique is antiquated, there is a modern day resurgence of interest in boutique
letterpresses."

To view a demonstration of an
Ashantilly letterpress in operation: go to YouTube.com
and enter Ashantilly Press in the search box

Visit the website www.ashantilly.org
for directions and a calendar of upcoming programs 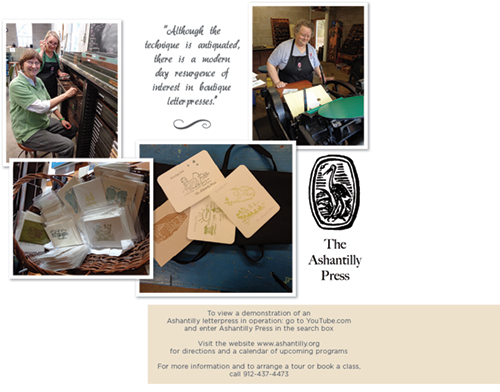