Mary Hunt and a Brief Herstory of Lady Captains 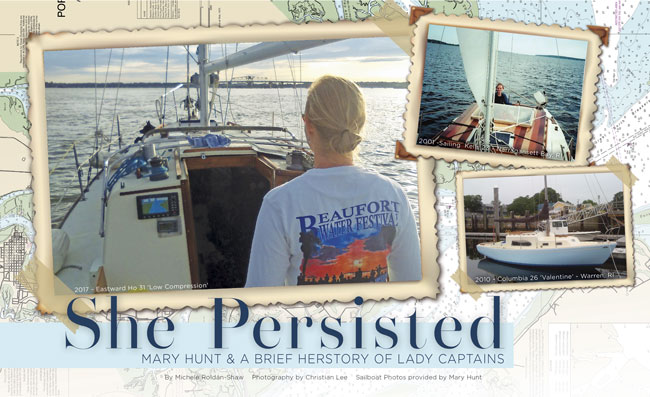 Nautical women’s history, while perhaps an obscure thread, is enough to inspire any bold female heart. Who doesn’t feel a thrill thinking about adventure on the high seas, or the sunny freedom of the cruising life? Legendary lady sailors astonish us with their bravado.

In the 1500s “Irish Pirate Queen” Grace O’Malley commanded hundreds of men and a fleet of ships against the British Crown to protect the independence of her homeland. At a time when women were mostly confined to traditional roles, she is said to have commandeered a Turkish ship the day after giving birth. Popular history remembers her for political shrewdness, audacity and seafaring skill that surpassed the men of her clan.

In the 1700s Englishwoman Hannah Snell entered the Navy disguised as a man. Following the death of her one-year-old daughter, she borrowed her brother-in-law’s uniform and enlisted under his name, by her own account to look for the husband who’d deserted her during pregnancy. (She later found out he’d been executed for murder.) Snell spent nine years at sea, during which she took 500 lashes and got shot in the groin during battle in the Far East—to protect her identity she refused treatment from the regimental surgeon and had a native woman extract the bullet instead. After finally revealing her secret, Snell was ostracized by polite society until a pamphlet popularized her incredible story. Eventually her service was recognized with a pension and burial at a military cemetery England.

Our modern era is full of the daring and even record-setting exploits of lady sailors, such as Claire Francis, who in 1973 sailed single-handedly across the Atlantic in 37 days. In 1978 Polish national heroine Krystyna Chojnowska-Liskiewicz became the first woman to circumnavigate the globe alone. Having set out two years earlier from Las Palmas de Gran Canaria, she passed through the Caribbean, South Pacific, Panama Canal and Cape of Good Hope, logging 31,166 nautical miles before returning to her port of origin, despite having to be life-flighted during the voyage for serious illness. In 1981 the American Kathleen Saville became the first woman to row across the Atlantic from the Canary Islands to the West Indies, and later rowed the longest trip ever: 10,000 miles from Peru to Australia.

But one need not endure hardships, set records or court history’s oceanic glory to be reckoned a worthy salt—even ordinary voyages take tremendous courage and skill, and have tremendous payoff. There is nothing quite like the cruising life: immersed in the bare elements of sun, wind and water, making discoveries over the bow, meeting folk of all nations with stories to set your heart skipping, or your hair standing on end. Goodbyes are waved from the stern and the next swell is crested...the world becomes more free.

One woman who has turned romance to reality is Mary Hunt, dockmaster and director of operations at Lady’s Island Marina. Having grown up a half-block from Rhode Island’s Warren River, sailing has been part of her life for as long as she can remember. Now she lives full-time aboard her Fantasia 35-foot
sailboat, a dream she cherished for years, with her half golden retriever, half cattle dog named Sweemo (short for sweater monkey.) He too is living his best life as marina mascot, roaming free and enjoying the boat people and dolphins. Mary loves the minimalism, simplicity and spare comforts of the live-aboard situation, the peace of rocking gently to sleep at night and waking up surrounded by water. She loves the adventuresome camaraderie of the marina community, and the way they band together in hurricanes.

“My family has been shell-fishermen for generations,” says Mary, whose great-grandfather was an oyster boat captain on the Warren River, and whose relatives still harvest quahogs, a type of native clam in New England. “Although I’d always been around it, I didn’t know how to sail until I bought my first boat at age 21 and a book called Fundamentals of Sailing. I thought I could learn from that, but really it’s something you have to learn by doing. You go out, you get beat up a little, you learn your limits and your boat’s limits. But rather than shying away from that, you embrace it and gain confidence from every experience.” 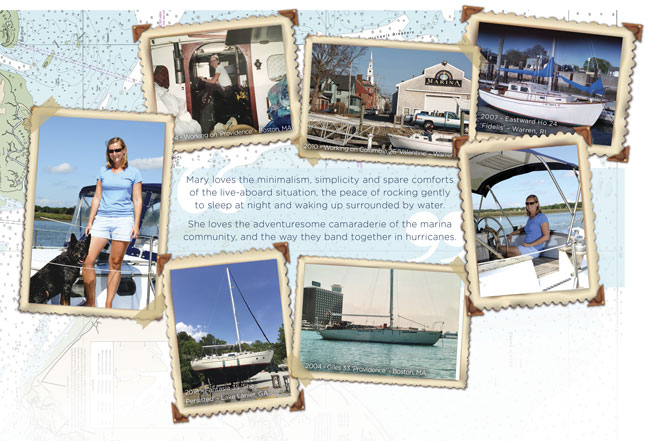 In December of 2016, Mary made the one-month voyage from Rhode Island to take the job at Lady’s Island Marina, where she’s been ever since. It’s a very different lifestyle coming from the North to the South, she says, but people have made her feel welcome and she tries to pass that on to visitors who arrive from every corner of the globe.

“We have a lot of live-aboards here,” says Mary, “artists, world travelers, people who work on boats, people from all over the world with all kinds of stories. It’s a fun tight-knit group and a really welcoming community for those who are just passing through. I’m drawn to boat people and boat life because it’s such a different set of circumstances. I know some people do it to escape something, but I’m a very socially conscious person, so I would consider it irresponsible to be unaware of what’s going on in the world around me, even though I live sort of apart.”

Mary recently christened her 35’ sailboat She Persisted, an homage to all the incredibly strong women in her life, especially her “strong, caring, loving, kind, dedicated” mother and grandmother, who Mary feels proud to have been raised by. But the name also tells a tale. When Mary first saw the boat listed, she fell in love and contacted the seller only to find out it had already been spoken for by another buyer who was coming to pick it up in a few weeks. Crestfallen, Mary told him to contact her if the deal fell through. Then she organized an “aggressive postcard campaign,” enlisting all her friends and family to send mail saying, “Dear Arnold, you really need to sell Mary this boat” etc. When she got the news that the buyer backed out, she hurried down to the marina at Lake Lanier, GA. By Mary’s recollection: “I jump in this boat and it’s dark, it’s dirty, it’s neglected, and I immediately knew it was mine.” The seller admitted her postcard campaign had been brilliant, that it was like Miracle on 34th Street with bags of mail being dumped out on the desk and everyone at the marina telling him how furious they’d be if he sold it to anyone else. And so was christened the worthy vessel: She Persisted.

As much as Mary loves the marina, living and working there seven days a week, her sights still extend over the horizon. One day a man told her, “At some point you’re going to get tired of making other people’s dreams happen. You’re going to want to do it yourself.” That rang true with her. In the not-so-distant future she sees herself gaining the flexibility to take time off for cruising the Bahamas, the Caribbean and beyond. She remembers turning the corner after sailing here for a month, seeing the marina and thinking, “Wow, we made it!” But immediately after came a bittersweet feeling because she had to stop moving. “We have a large contingent of boats here that leave in winter for the Bahamas,” Mary says. “It’d be nice to join up with the gang.”

The maritime world is still largely dominated by men, but Mary Hunt is a living example of what’s possible for intrepid, capable women who dare to dream. She’s done well at Lady’s Island, and many consider her the face of the marina.

“You don’t have to overdo it trying to prove yourself in a male-dominated environment,” she says. “Just be good at what you do, then try to balance between confidence and humility, because when you need help, you shouldn’t be afraid to ask. At the end of the day people will respect you for not going overboard.”