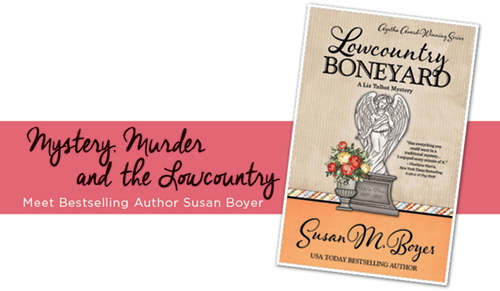 Susan Boyer likes to say she grew up wanting to be like Nancy Drew. And that day has certainly arrived.  Now a USA Today bestselling and Agatha Award-winning author, Boyer’s lifelong love for mysteries and solving puzzles has evolved into her distinctive series of Liz Talbot novels.

The third in Susan Boyer’s series, Lowcountry Boneyard, explores the disappearance of  Kent Heyward, a young woman and only child of wealthy and eccentric Charlestonians. Hired by Kent’s father Colton, private investigator Liz and her partner in love and crime, Nate, pore over a bemusing case of suspects. Each has a compelling motive for “doing away” with Kent.

Boyer says she has several ideas floating around in her mind at any given time before she begins a new work, but there’s always a trigger that sets her process in motion. “I always know what the crime is and who did it before I begin,” she explains, “and then I work backward to determine who will hire private investigator Liz to solve the case.”  Throughout Lowcountry Boneyard, Boyer plays a well-turned game, divulging family secrets only to create more and keep the reader wondering.

One of the best parts of this delightful mystery is Liz herself, a woman savvy in her ability to escape a poisonous snake delivered to her house and confront her frightening discovery in the murky marsh skirting Magnolia Cemetery. To create exciting and yet believable situations, Boyer says she tries to be Liz and consider every possibility as her characters begin to look guilty.

“Liz is a kind of avatar for me,” Boyer explains. “She is younger and braver than I am and does lots of things I wish I could do, but she still sees things from my worldview.” It’s fun to send Liz into pursuits she can’t do herself," Boyer says.

Boyer works out of her own imagination, but she also carefully researches technical information about ways to commit murder and attempt to get away with it. It’s important to her that readers engage in genuine situations.

As successful as she is in her working life, Liz has an unsettled relationship with Nate in Lowcountry Boneyard. They have a long-distance relationship between Nate’s home in Greenville, S.C., and Liz’s home at Stella Maris. Though they care deeply for one another, they also care deeply about their roots, and neither wants to move to the other’s homeland.

“Family is important to Liz because it’s important to me,” Boyer explains. Thus, the conflict between love and the draw of home becomes a powerful component in the novel as Liz and Nate struggle to balance business with their personal lives. Their relationship evolves significantly in Lowcountry Boneyard and according to Boyer, will continue to do so in her novel in progress, Lowcountry Bordello.

Boyer doesn’t know how many more adventures Liz will have, and therefore how many more Liz Talbot mysteries will come to be. Right now, she plans for many more, she says, “as long as Liz keeps talking to me.” 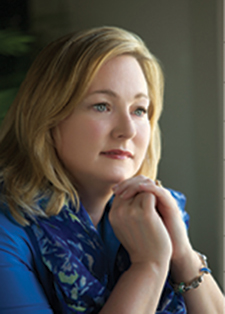