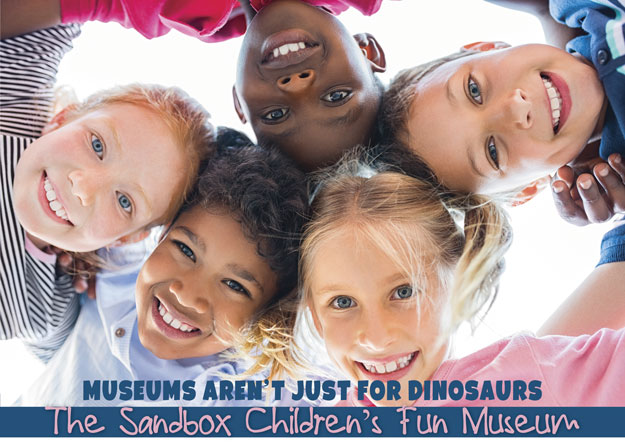 “Where kids learn to play and play to learn” is more than just a phrase for those who built and continue to build The Sandbox—it’s the motto that fully encapsulates their daily mission. The Sandbox is the Lowcountry’s only children’s museum. With two locations—one on Hilton Head Island and another in Bluffton—this non-profit organization is the perfect destination for children ages 4 to 12 to experience exploratory, hands-on play with an emphasis on education.

As it’s said, necessity is the mother of invention. In the case of creating The Sandbox, it was a group of mothers! In 2003, a set of women were looking for a safe, educational space where they could bring their children together to play. In getting together and formulating a plan, they also created a focus group study that confirmed the need for it and the support of the community to build it. By December 2005, The Sandbox became a registered 501(c)3 and eagerly opened their doors to the community.

The exhibits at The Sandbox are interactive and plentiful, ranging from a flight deck where possible future pilots can experience sitting in a cockpit and viewing simulated flights, to a veterinary clinic where future healthcare providers can diagnose and treat their favorite stuffed animal, to South State Bank, set up with counters and a bank vault for the next little accountant. They also have a variety of programs, such as monthly free family fun nights and Awe-STEM Saturdays, where kids can explore the world of science, technology, engineering and math in facilitator-led STEM experiences, which introduce them to concepts of chemistry, biology, physics and the world around us! When speaking to Executive Director Nancy Fish, she described that “…the whole reason it’s called The Sandbox is because a sandbox is a place where you can come, meet other people and play together. It’s a fun and peaceful setting for children.”

Children’s museums, which once seemed like a luxury, are now a necessity. Hands-on, structureless educational play does not have a presence in children’s day-to-day lives as much as it used to. The landscape of what childhood looks like has evolved, and it inevitably has come to mean spending less time in the playground sandbox. That means less time spent exploring the environment, manipulating different objects and the excitement felt of creating the perfect new masterpiece after endless tries to get it right, all on one’s own. These are all skills that support children in building reasoning skills, as well as fine and gross motor skills. Herein lies the essentiality of children’s museums: They are spaces designed intentionally to permit the imaginative, spontaneous behavior that defines how children naturally act.

A notable event The Sandbox hosts to promote just that behavior is the Discover, Imagine, Grow event. It supports pre-school aged children on how to use a pair of scissors, how to stand in a line and how to sit in a circle, just to name a few. It allows children to have a smooth immersion experience into school, instead of being left not knowing how to adjust to the new culture.

Among these opportunities The Sandbox provides to the youngest residents of the Lowcountry along with its visitors, their experience also enhances familial relationships. At The Sandbox, the child’s caregiver is greatly encouraged to play along. “You have parents and children playing together interactively. Not on tablets, but hands-on play for both. There are some adults you have to coerce, like ‘Hey grandpa! You can play with the Play-Doh, too!’ but more often I see adults playing on their own without their children! Everyone has an inherent need to play, even if they need some convincing that it’s okay,” Nancy elaborated.

Between both locations, with the second location opened in July 2019, more than 30,000 children and their caregivers visited The Sandbox in 2019. It has proved its place as a vital component of this community. Nancy says, “The Sandbox was built out of community need, and that’s what we look at.”
The Sandbox is currently running a capital campaign for their new Hilton Head Island location in Coligny Plaza. To donate, as well as to find out more information about The Sandbox, visit their website at www.thesandbox.org.

For upcoming events, more information about The Sandbox, and how to support it, visit www.thesandbox.org and the Community Foundation of the Lowcountry website www.cf-lowcountry.org.