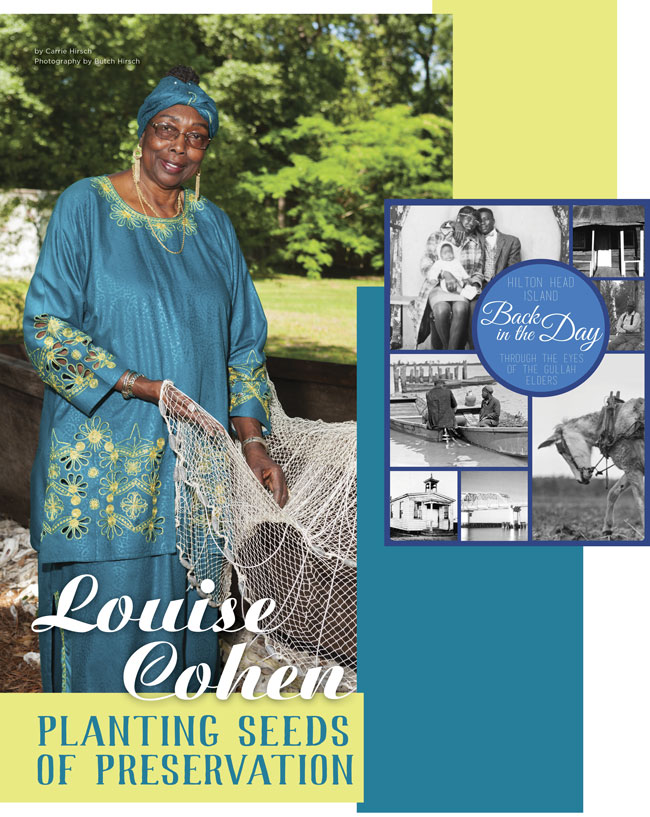 The roots of the Gullah culture run deep, like those of the sprawling live oak
in the center of the museum’s lawn at the intersection of Gumtree Road and Georgianna Drive. The first question visitors ask when standing there is always: “Is this the spot where the Little House was built?” says the Gullah Museum of Hilton Head Island (GMHHI) founder and executive director Louise Cohen. And she had no plans for the answer to ever be “no.”

After envisioning a new purpose for her homestead, Louise established the museum as a non-profit organization with help from S.C.O.R.E. and other supporters and volunteers in 2004. Louise has been busy in her preservation efforts and programs ever since, and catching up with her is not an easy assignment. She had just returned to Hilton Head from presenting at a luncheon for 75 authors in the Colonial Ballroom at the landmark Francis Marion Hotel in Charleston on the day we met for this interview. Interest in the history of the Gullah/Geechee culture has been on the rise nationally. Following our interview, Louise was slated to present on Gullah culture at the Port Royal Foundation’s Maritime Center.

Many unique elements contribute to this storied culture, and the National Park Service has designated areas spanning the coast from North Carolina to Northern Florida as the Gullah/Geechee Cultural Heritage Corridor. Louise focuses on the language, food ways, crafts and song. As her props, she shows the oil lamp she read by at night as a young girl and the quilt that kept her warm at night. Growing up speaking the language was something she and her fellow Native Islanders only did at home. During her schooling, she recalls the teachers forbade the students to speak Gullah. The language was referred to as being “country”.

Now, Lowcountry menus tout traditional Gullah dishes, using ingredients of field peas to serve with rice, freshly shucked oysters for rich gravy, shrimp caught in the pristine waters to stew, finished off with a slice of sweet potato pie—all to be consumed with a small glass of homemade Mulberry wine on special occasions. The craft of sweet grass basket sewing is taught in Lowcountry schools through educational outreach programs by artisans Michael Smalls and Dino Badger thanks to funding by the Arts Center of Coastal Carolina and other organizations that support the importance of preserving this unique craft. The spiritual hymns that Native Islanders sang from birth in churches established here over a century and a half ago continue to be sung today in those very same churches. Louise often sings Amazing Grace or recites the Twenty Third Psalm in Gullah to close her presentations, which always leaves her audiences wanting more.

Louise finds storytelling evokes stories in others. “There was one young man from North Carolina at an event recently. He remembered his grandfather would speak Gullah to him when he spent summers in North Carolina as a child. In school, he could then interpret what the children were saying for the teachers. My presentation stimulated his interest, and he’s going to find out more about himself and his Gullah roots. And another lady remembered: When she was a child her family had a Miss Emily in its employ, and that I resembled her and was I possibly any relation.” On a personal level, Louise wonders about her own family genealogy. “A slave cabin was disassembled from nearby Edisto Island and moved to the Smithsonian in D.C. I often think my ancestors could have very well been living in that cabin, but I just don’t know. There was another lady who was embarrassed to ask during the museum tour but took me aside and wanted to know how the people coped with all that they went through,” says Louise. “The only thing people had was the word of God, and they comforted themselves with song. Our people had to trust God. Our struggles are going to be a testimony for somebody.”

Built in 1930 and restored in 2010, The Little House is the main attraction at the GMHHI and needs a fresh coat of paint before its 90 year anniversary in 2020. Land ownership was key to the Gullah community after the end of the Civil War. Having property to farm and build a home on meant families of freed slaves could establish themselves, then build businesses and relationships in the different neighborhoods including Stoney, Squire Pope, Mitchelville, and Glassland. “The cash crop really was watermelon and butterbeans. People had big families, and they had to educate their children. On the isolated island, bartering was a way of life. This tradition changed greatly once the bridge was built in 1956,” says Louise. A new attraction at GMHHI is the handmade bateau built by boat-builder Frank Kidd, Sr. It sits on the site to show visitors what a typical fishing vessel looked like and was unveiled earlier this year.

Louise and her volunteer board members raise funds by giving tours, arranging screenings of the documentary “Hilton Head Back in the Day Through the Eyes of the Gullah Elders” with the support of local businesses like Coligny Theatre, and by soliciting private donations and grants. They always welcome prospective ‘roll up the sleeves type’ board members and volunteers who share their vision. Architectural plans for a joint “privy” have been drawn up — one for women and one for men—and the now the museum is looking for funding. “The ultimate strategic plan is to build a structure with a meeting room, a gallery, and a retail space. It’s time for us to have our own building; that’s my goal to have our own building on the site” says Louise. Right now, an outdoor platform stage, storage pod and portable toilet serve the purpose.

The GMHHI has a busy schedule putting on its month long summer camp offered on the four Saturdays in June. “We‘re encouraging all parents to submit an application before all spaces are taken because we’re not charging for the camp for those kids because we got a grant to do that. We are simply trying to fulfill our promise to pass on our heritage to children and make them feel pride in being Gullah. We’ll be doing drumming, an indigo workshop, basket sewing, jewelry making and storytelling. It’s needed,” explains Louise.

In addition, planning is well underway for its annual gala in January of 2020, where those on the front line of preservation, known as the Trailblazers, will be honored. Last year, Gullah women age 85 and older were honored, and emotional stories of their lives were shared and treasured by family and friends who came from all over the country.

Being the Executive Director is not all presenting at fancy lunches and being featured as a speaker in ballrooms. “There are certain spots on the site which are uneven. We need to have dirt hauled in there to even out the lawn. I’m meeting with the contractor to get a quote. And there are leaks in the roofs of a migrant farm worker building and the silver trailer, which each has their own historical significance,” adds Louise. “I have this job that I did not apply for. I’m bringing money into the organization so we can fulfill our mission.” She cannot see herself in any other role but this one, and the world, especially the part called the Gullah/Geechee Cultural Heritage Corridor, is certainly a better place with Louise Cohen in it.

For further information including hours, please visit www.gullahmuseumhhi.org or call 843-681-3254 to make an appointment for a tour.