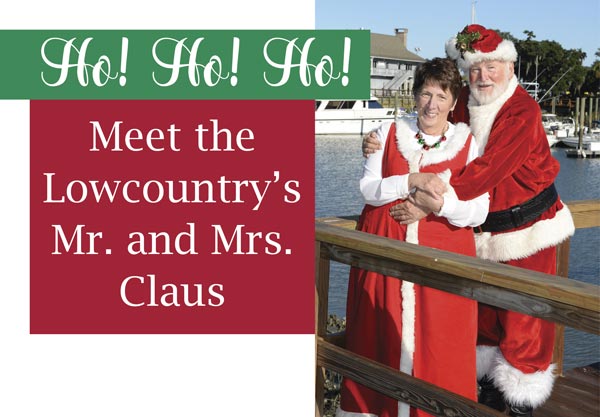 There are a few things Santa looks for in choosing his very best helpers, especially when both Mr. and Mrs. Claus are called for duty together. You better know he has a list and checks it twice!

Happily Married? Check!
Joe and Susan Patton have been married 53 years and are still madly in love and best friends. When asked what the secret is to their long, successful marriage, Joe said there are no secrets. “We tell each other when we’re unhappy.”
Susan added, “Sharing our principles of faith together is an important part of it.” They both agreed quarantining together most of the year has not been a bad thing.

Has a heart for Children—young and old? Check!
Joe and Susan, locally known as Mr. and Mrs. Claus adore the children. Back in the early 2000s, when their daughter Jennifer Megliore opened her shop Artware, Joe and Susan volunteered to put on the suits and add holiday cheer to Main Street Village on Hilton Head Island, where Artware was then located. They did it for their child, though she was an adult, but fell in love with playing this role for all the children who would come and see them. Getting to interact with the children filled with innocence and the wonderment of Christmas was an added bonus. Ultimately, though, it was another child who they really did it for—the Christ child.

Is long on patience? Check!
Mr. and Mrs. Claus have dealt with many situations all with happiness and grace. Long lines, impatient parents, screaming children—you can only imagine the numerous scenarios that can unfold when you combine parents, children, cameras and Santa Claus. It seems the children sometimes behave better than the parents, given the Big Guy is right there in person with the naughty and nice list. “Parents don’t want their little ones to take up too much of Santa’s time, so they rush them along. But we’re in no rush. Santa wants to talk to the children and listen to what they have to say,” Susan said.

Believes in the magic of Christmas? Check! 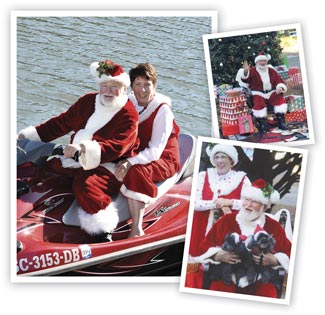 “I get to stand behind Santa sometimes, so I have a vantage point those out in front don’t see. A child will gently raise his or her finger to touch Santa’s beard and realize it’s real. I cherish that moment when belief visibly fills a child’s eyes. It is magic,” said Susan!

Pays Attention to the Naughty and Nice List? Check!
Santa talks to every child and asks them not only what they want for Christmas, but also if they have been good this year and if he or she is helping out at home, specifically are they are making their beds. He explains to them that Christmas is all about love, and helping at home is how they can let his or her family know they love them. Sometimes he might explain how important it is to take care of the things you already have before you get new things. This Santa believes all the children he sees are on the nice list and enjoys more than anything hearing the children tell him what is in their hearts. Many children talk about what they want for their mommy or daddy or their family.

Can Go With The Flow? Check!
Santa has had infants, children and adults of all ages and sizes, generations of families, tons of dogs, including a great dane, teddy bears representing children who have already gone to heaven, both locals and people from all over the world and even a bridal bachelorette party pose with him for pictures. Through it all, Mr. and Mrs. Claus keep the spirit of the season their top priority. (And, if you know Joe and Susan, they have this spirit all year long!)

Understands the true meaning of Christmas? Check!
Mrs. Claus especially likes to bridge Santa’s presents with the birth of Christ. She tells the story of the holiest night of the year and the gift of God’s son. “It makes an impact on the children and often their parents, too,” Susan said, smiling!

Understands Teamwork? Check!
Joe says this is a partnership, a team effort. He explained how Susan organizes everyone, keeps people happy while they wait, herds children and introduces them to Santa. She handles the screamers with finesse and calms the nervous parents. “I just couldn’t do it with out her,” Joe said. And, isn’t that what every Mrs. Claus wants to hear?
Santa has helpers all over the world, but he appointed
his very best to the Lowcountry. Be sure to stop by Artware at Shelter Cove Towne Center to join in the holiday cheer.

The isles of palms and oaks will come alive with holiday cheer at Shelter Cove Towne Centre. Santa and Mrs. Claus will be in front of ArtWare on Saturdays December 5th, 12th and 19th. Santa will be in a socially safe setting 5:00 to 7:00 p.m. to enable children and adults to take their annual photograph.  Santa and Mrs. Claus will wear full face shields, and visitors can talk to him from behind a garland chain. A special Christmas elf from the North Pole will help people stay socially distanced, and can even take pictures with your iPhone or camera. Sanitizer will be available. Children, adults and pets are invited.

ArtWare celebrates their 20th anniversary on Hilton Head Island this holiday season, and owner Jennifer Megliore (Mr. and Mrs. Claus’ daughter) has made these special arrangements so socially-distanced Santa can still be in your family Santa photos.