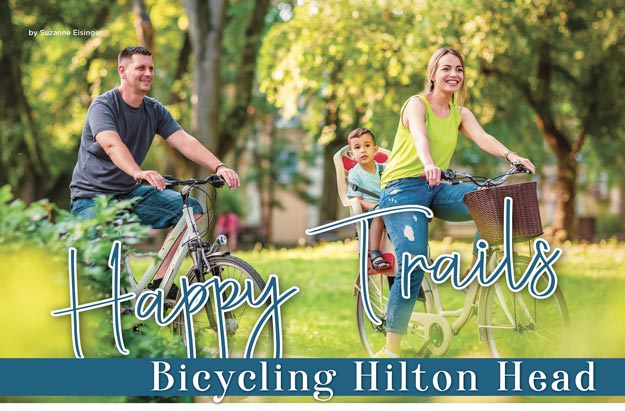 Can’t do it? It’s no wonder. Bicycling the Island has become as much a part of Hilton Head as its world famous beaches and golf. In fact, Trip Advisor has ranked ‘Riding Hilton Head’s Bike Trails’ as the No. 1 attraction on the Island six years running, and Island Packet’s David Lauderdale recently named bicycling as one of the top 5 things that changed the way we live in Beaufort County.

Quite a leap from Charles Frasier’s modest goal of giving residents and guests greater access to Sea Pines by building the Island’s first leisure trails in 1970.

Changes this momentous don’t happen overnight—or by accident. They are the culmination of years of work by a dedicated group of volunteers who were both able to see something special about this island and willing to be the squeaky wheels behind getting it done.

Babel, a retired executive from Dallas, has considered Hilton Head home for well over two decades, moving here permanently with his wife Linda in 2005. Babel began attending Town meetings after noticing that the trails were in need of improvements. In 2005, believing that “we could be better than we were” at being a bike friendly community, He founded an advocacy organization called ‘Squeaky Wheels’ as well as the ‘Pedal for Kids’ program.

Around this time, Babel learned about the League of American Bicyclists’ Bicycle Friendly Community program (BFC), which provides a roadmap for communities seeking to improve their quality of life, sustainability and accessibility with regard to biking. Seeing this as a positive step for the future, Babel worked with the Greater Island Council to encourage the Town to apply. They agreed and began investing in a number of infrastructure improvements, including new pathways, closing critical gaps, adding pathway safety features and improving trail maintenance.

In 2011, after only its first attempt, Hilton Head Island was awarded the Silver level designation, the highest award in the state. Yet, its work was just beginning. During the first four years of BFC designation, the community worked to advance bicycle safety and awareness on the island. “We needed to keep the momentum going,” Babel says. “That’s when we started the Bike Advisory Committee in 2011 with the original people who wrote the application, co-chaired it with the Chamber, and recruited another 15 volunteers.”

The mission of the BAC is to make Hilton Head Island a safer and more bicycle-friendly community. “We’re not promoting more biking, necessarily,” Babel says, “we’re promoting safe riding.” By building multi-use paths and making them safe, the logic is that ridership will naturally increase. In other words, “build them and they will come.”

And boy, have they. Currently, there are 30 bike shops on the Island, capable of renting up to 25,000 bicycles. Counting bikes brought in by visitors, that adds up to a potential 35,000 bikes a day out on the pathways at any given time. And where do these bicyclists ride? From those initial 17 miles of pathways built by Fraser in the ‘70s, there are now 125 miles of multi-use paths on the Island, not to mention an additional 12-miles of bikeable beach.

However, access is only part of the equation--safety is key. According to Babel, there are now 50 signalized crossings at every major intersection, along with safety islands that cyclists can use to cross major streets. The BAC also works with the Town to identify dangerous places on the island and determine how to make them safer. An example of their collaboration is the recent construction of two signalized crossings across the William Hilton Parkway at Shelter Cove.

Clearly, the community’s passion, vision and hard work have not gone unnoticed. In their subsequent recertification applications for Bike Friendly Community status, Hilton Head Island was awarded the Gold medal in both 2015 and 2019. And they couldn’t be happier. According to Jennifer Ray, Town Deputy Director of Community Development, “We are excited in general to see people using our public pathways and beaches for bike riding. Bicycling is one of the best ways to get exercise, see sights around and reduce our carbon footprint.”

Examples of public support abound. In May, which is National Bike Month, the Town of Hilton Head will support the Community Beach Bike Ride and the Annual Ride of Silence. That same month, the Rotary Club of Hilton Head Island hosts an annual bike-oriented Treasure Hunt. Pedal HHI, an annual weekend biking event, which raises money for the Boys and Girls Club, is held in November. And each January, the BAC and Chamber of Commerce team up to organize the Biking Symposium, an event dedicated to bicycling awareness, which attracts bicycling advocates and planners from around the Southeast.

And that’s not all. Thanks to the Rotary Club of Hilton Head, there are kiosks with mounted trail maps, as well as informational pathway signs scattered throughout the island. They also donated funds for the BAC Vulnerable User’s Vest Program, which provides bright yellow vests to service workers who commute to work on their bikes. The Town of Hilton Head works with the Boys and Girls Club and Island Recreation Center to teach bicycle safety and provide helmets to youths. During high traffic months, the Bike Ambassadors volunteer program provides directions and assistance to cyclists along public pathways, Sea Pines and parts of Palmetto Dunes. And at high profile events such as the RBC Heritage Golf Tournament and Concours d’Elegance, BAC and Kiwanis volunteers provide parking for bicycles.

With all of these accomplishments, one might expect Hilton Head’s bicycling community to be content to rest on their laurels. Not a chance. According to Babel, the BAC and other community advocates are providing input on projects that will enable bicycling to expand into other parts of Beaufort County as well, including the 278 Bridge Corridor Project, which will build a safe, protected bike/ped pathway to and from the Island, and the East Coast Greenway project, a long distance multi-use trail network spanning Maine to Florida and passing through through Beaufort and Hardeeville.

So, whether you’re cycling the beach, or across the Island, riding for relaxation or burning calories, clad in Bermuda shorts or brightly colored spandex, it makes no difference.