Spreading Cheer and Glad Tidings in Remembrance of Emmy Wilson 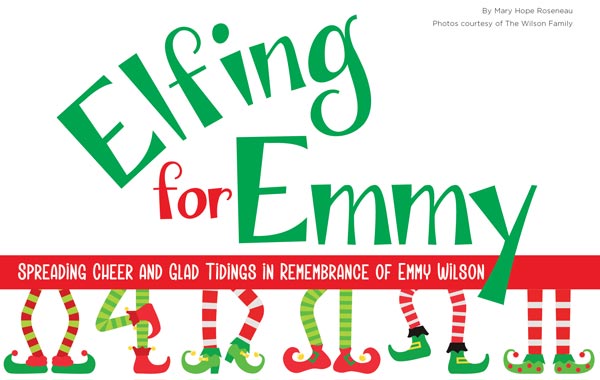 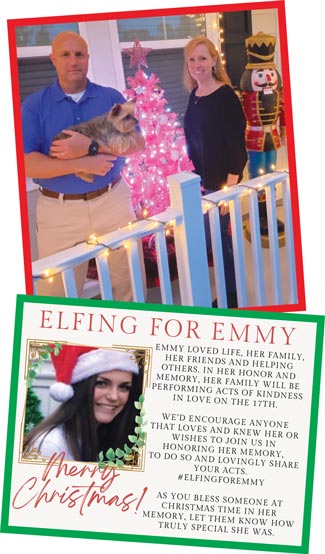 Christina Wilson is a successful young executive with diplomas on the wall, and her “to do” files neatly spread upon her desk. She is very pretty, polished and articulate, but the day I interviewed her, she was just a mom, a mom who had the unthinkable happen. Her 16-year-old daughter, Emmy, was killed in an automobile wreck on December 17, 2019, and in the last three years, Christina and her husband, Jason, have been through the depths of grief, searching for ways to celebrate their special girl.

According to Christina, Emmy would just love having this Pink article about her. She enjoyed being the one having “her name in lights” and was described as “larger than life,” and she “took all the oxygen out of a room when she entered it.”

Jason and Christina adopted Emmy, and her sister, when she was two years old. She had a beautiful smile that could win over anyone she met. She was a junior at Beaufort Academy, a class officer, and a member of the National Honor Society and the Interact Club. She played basketball, volleyball and softball, which was her favorite. She was an active member of St. Mark’s Episcopal Church in Port Royal.

Last year in 2021, as Christina and Jason were facing the second anniversary of Emmy’s passing, they felt a lot of “anticipatory anxiety.” The first anniversary was sad and full of grief; not at all like Emmy would have wanted. In discussing their plans for the second anniversary of Emmy’s death, the two planned to simply go out to dinner with their best friends, Aunt Cindy and Uncle Mike Graves. They discussed leaving a nice tip for their server in her honor.

As December approached, however, Christina and Jason found themselves called to do small acts of kindness in honor and love in Emmy’s memory. Christina designed an “Elfing for Emmy” social media post and shared it with her friends. The post asked to remember Emmy by performing an act of kindness in her honor. Christina and Jason’s friends shared to their friends. Early in December, they began to see #ElfingforEmmy take off. The fun caught on, and soon friends in Beaufort and people from all over were doing simple, small acts of goodness to remember this sweet girl.

People took pictures of themselves everywhere from New York City to Florida, giving surprise gifts to random folks like those working drive-through windows, Walmart workers, or a Huddle House waitress. They also restocked “Little Libraries” with children’s books and made 140 care packages for prisoners with deodorant, toothpaste, soap, socks, peppermints and Jolly Rancher candies. Therapy dogs from Beaufort visited Medical University of South Carolina (MUSC) in Charleston and participated in the Christmas parade in honor of Emmy. Pizzas from Pizza Hut were delivered to EMS workers, and nursing home residents were sung to and given fuzzy holiday socks and homemade cards, all in honor of Emmy. 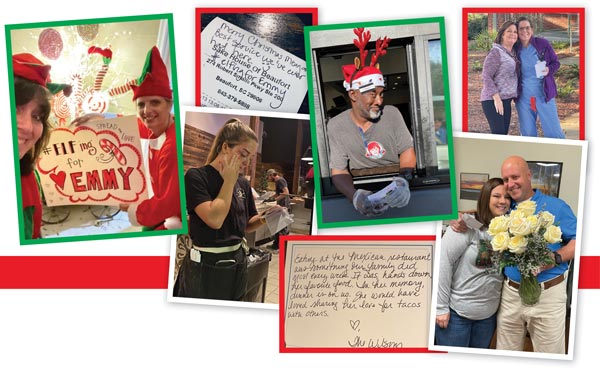 One person searched on GoFundMe pages for people to donate funds in honor of Emmy. Beaufort Academy parents sent treats for the teachers in honor of Emmy, and folks in a drug recovery home received money in their house account in honor of Emmy. Fifth graders practiced a Christmas presentation and shared it with the school, and concession proceeds from a basketball game went to a charity in honor of Emmy. First graders made “packages of kindness” to pass out at a grocery store, or anywhere they saw someone who needed some kindness.

Toys and socks were collected all over with “Herbie the Elf” urging folks to “Elf for Emmy!” Exam snacks were given to the upper school students by the Beaufort Academy Sunshine Committee and Library staff in honor of Emmy, and a little girl brought treats to first responders. One person even paid $600 in past due tuition for two families in need!

As for Christina and Jason, they waited to do their elfing until December 17. They, along with Aunt Cindy, Uncle Mike and baby brother, Aidan, spent all that day together. They gave nice tips to servers, they bought white roses for old coworkers and basketball jerseys for the Beaufort Academy team, all to “just remember Emmy.”

Christina and Jason have reached out to other grieving families who have lost a child. Last year while elfing, they placed a pink Christmas tree on a grieving family’s porch. This year, Christina was scrolling through Instagram, and saw a video about a family in another state, who lost three children on December 17, 2021, the same day they lost Emmy, only two years later. She has already ordered flowers for their mom and dad to send love from another family who will be grieving on that day; she sent a unique flower for each child gone too soon, including Emmy’s favorite, a white rose. She feels this is a calling now, and again to express love to Emmy, who would want her to do this. 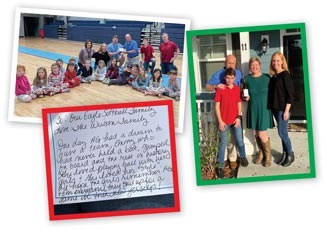 Christina had special “Elfing for Emmy” cards printed last year, and will use them again to give to the folks who receive the special gifts of kindness with Emmy’s sweet face on them, wearing a Santa hat. You can see Emmy’s smile twinkling, knowing this is just what she would want.

Advice from Christina for loving someone who has lost someone:
• There are no words to be spoken. Simply listen.
• Offer to assist with life's necessities: dinner, laundry,
yard work, babysitting.
• Remember nobody grieves the same: extend grace,
especially around the holidays, to those who have lost.

Mother knows best:
What Christina said in knowing Emmy would love this article:
“Let me tell you what....that Emmy Lou Who.....when she sees her name
in a magazine....girl, WHAT! She will have made it big time.”

You can #Elf For Emmy:
“In all seriousness, thank you for thinking of us and our sweet baby.
Our hope is that somehow, someway, something good
comes of our tragic loss.”