HomeFeaturesThe Joys of Cross-Training: Mix Your Sports, Nix Your Injuries 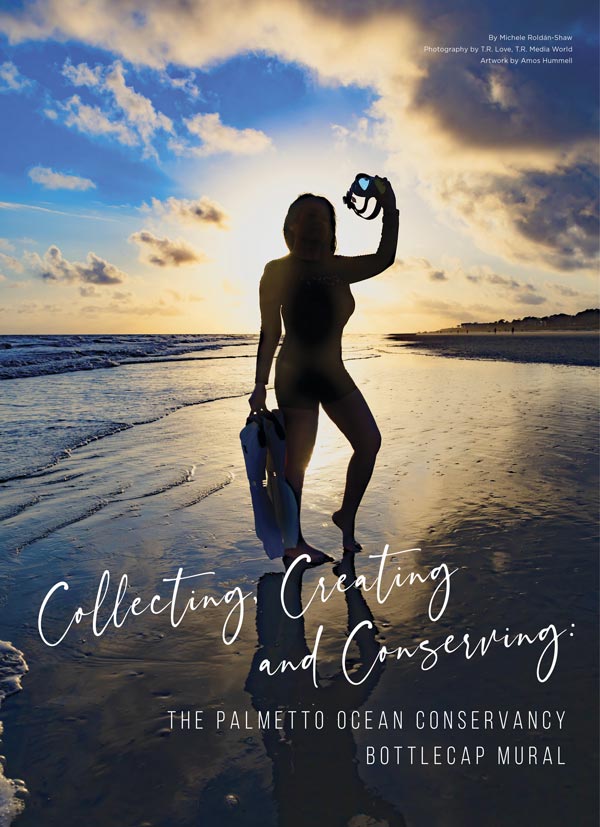 Blue caps from bottled water become the ocean.
Yellow caps from sweet tea become a sea horse. Orange juice caps become crab claws and red Coca-Cola caps become the inside of a shark’s mouth. The transformation is artistic but also symbolic: trash that could have polluted our environment, instead becomes a touchstone for preserving it.

The Palmetto Ocean Conservancy Bottlecap Mural Project is the vision of Michelle Meissen, a diver and conservationist from California who brought her passion for stewarding the marine world to the Lowcountry. In 2017 she founded the Palmetto Ocean Conservancy with the idea of educating people about sharks—which are something of a totem for her as “Guardians of the Sea”—and to raise awareness about the nurseries our local waters contain that support so many different species. When Michelle visits schools to talk about sustainability, her shark photos never fail to get the kids fired up. She was a key proponent of Beaufort County’s plastic bag ban, and her “Go Strawless” initiative has made waves of its own. Now she is closing in on the first of a series of bottlecap murals that have been years in the making, and which will ultimately grace several locations around Beaufort County. The first installation at Oyster Factory Park in Bluffton is scheduled for completion by spring of next year.

“We wanted it to be out of the ordinary,” affirmed Michelle, “not just your run-of-the-mill bottlecap mural but something that resonates beauty. And we wanted to show that these small, insignificant pieces of waste add up. If you just collect one small bit every time, can you imagine the trash that’s in our landfills? It’s easy to throw away without knowing where it’s going, or what’s accumulating in the process.”

Through partnerships with area businesses and schools, Michelle has amassed an astonishing 3 million caps. “You have no idea how freaken heavy that is!” she exclaimed. “It’s like a mountain. They will not fit in my garage.” Children have been especially industrious in gathering the caps, with individual schools tallying numbers as high as 125,000. 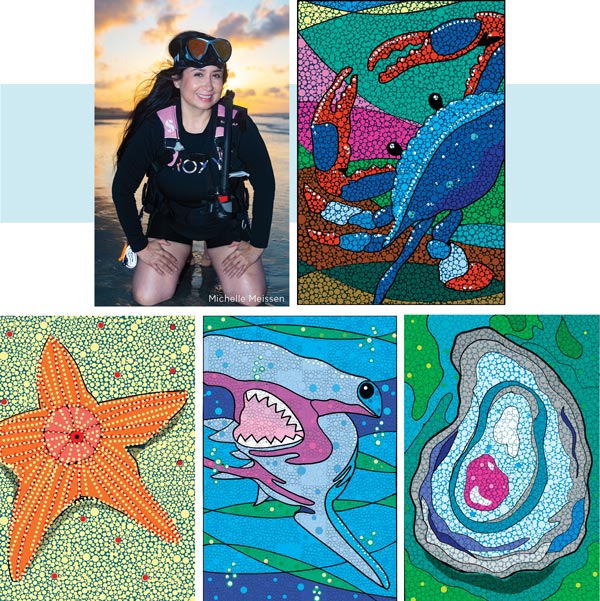 “This is something that spans all ages,” said Meredith Dimuzio, a Palmetto Ocean Conservancy board member, who has been involved with the educational component. “My kindergartener can understand that we need to go clean up the beach to help the animals. My freshman gets it because he wants to be a marine biologist so he understands the long-term aspect. The simple act of collecting bottlecaps may seem foreign to some, but once they see what it can become, hopefully they’ll be inspired to take another look at their day-to-day, what they’re using and what else they can do.”

As the caps keep pouring in, Michelle has campaigned tirelessly. She’s raised funds, established partnerships, recruited artists, organized events to clean and sort the caps by color, and worked with Beaufort County and the Towns of Hilton Head and Bluffton to get her plans approved. She even looked into what it would take to set a Guinness World Record for largest collection and structure of bottle caps. The Bluffton installation will be comprised of eight 12’ x 8’ panels depicting sharks, dolphins, sea turtles, blue crabs, pelicans, oysters and other marine life. The images were designed by local artist Amos Hummell, who started with Google searches of bottlecap colors, then broke the animals down into bands of flat color that included highlights and lowlights. He also worked out construction specs and estimated the number of bottlecaps needed per panel.

Candace Lovely, a fine art painter on Hilton Head since 1979, was selected for the mural at a yet-to-be-determined site on the island. “I’m an impressionist painter so this is right up my alley,” said Candace, whose landscapes of sunrise over Skull Creek and beach scenes with umbrellas, morning glories and sea oats will be reinterpreted using the bottlecaps. “I’m just fascinated by how up close you can’t tell what it is, but from far away it all comes together.”
Lovely explains that the dashes of impressionist painter Claude Monet became the dots used by Seurat in pointillism, which in turn gave way to the squares (pixels) we have today. Her hope is that the project will “enlighten young minds” not only as to sustainability, but also the creative process of putting one color next to another to create a new color, and the way that form emerges from light and shadow.

To ensure viewers make the jump from art to environmentalism, there will be an information kiosk by the mural that offers education about the creatures depicted and ocean conservation in general. But perhaps the site itself makes the most convincing statement, as Oyster Factory Park sits on the very waters we need to protect.

“The bottlecap mural is about bringing awareness to conservation of our natural resources,” said Wallace Milling of Witmer-Jones-Keefer, Ltd., a landscape design firm in Old Town Bluffton that has been developing the park. “We think it’s a great site because it happens to be the flagship access point to our most cherished natural resource: the May River. Everything is connected by the water—it’s so important to our way of life.”

Taken into consideration were factors like visibility, safety, and most of all, a design consistent with the message of sustainability. Construction needed to be simple and low-maintenance to stand the test of time, but it also needed to utilize indigenous materials like wood and tabby concrete that have historic regional significance. The existing natural topography of the land was maintained rather than trying to alter it, and plantings of native grasses and palmettos were highlighted.

“This isn’t a formalization or a heavy imprint on the land,” said Wallace. “We’re just trying to preserve and enhance the existing landscape to provide people with connectivity to the river, the culture, our heritage and our community.”

Through the help of so many volunteers and donors—in fact, the rallying of an entire community—the Bottlecap Mural Project is finally materializing, to the delight and gratification of Michelle. “Coming from California you see what can happen if we constantly build, build, build and we don’t conserve,” she said. “Things go away. And the more we build, the more trash we accumulate—where is all that going to go? So the whole objective of this project is asking what we can be doing as a community for our environment, because we all love it here.”