Are You Attending the Gala? Celebrating 50 Years of Art Magic! 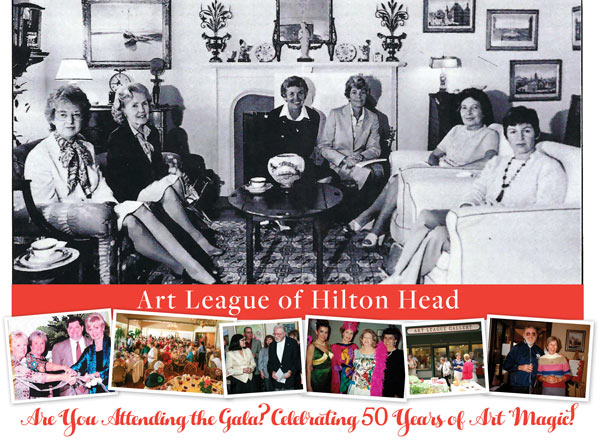 Have you ever wondered what the Art League of Hilton Head is all about? Well look no further because I’m excited to fill you in on the past five decades—that’s right, 50 years!—of this amazing little gem that sits on our island. In fact, it actually sits in two places on our island.

The Arts Center at Shelter Cove houses the Art League’s incredible gallery space, where member’s art is exhibited six times a year with a featured artist, as well as the popular Gullah Art wall. There is also a “small art” wall and a selection of one-of-a-kind custom jewelry. The next time you attend an Arts Center show, be sure to stop in the gallery; you’ll be amazed at the talent on our island.

Our Art Academy is located on Cordillo Parkway and is a fabulous studio space, offering classes and a gallery space where you can see our instructors’ work. This creative space even offers lockers for those members looking for a permanent studio space.

When I first moved to the island six years ago as a retired art educator, my goal was to reach out to our art “places.” Upon meeting Amy Wehrman, the academy manager, I knew I had found a new home. I have been on the board of directors for the Art League for the past three years and love working with this dedicated group and being an exhibiting member.

Of course, once I became involved, I wanted to know everything about the League, so I dug in my heels and I did my research. Here’s a bit more history that makes this place so special:

It was 50 years ago that Art League of Hilton Head held its first meeting as well-known artist Walter Greer, Art League Gallery’s namesake and visionary founder, gathered a group of nine people at the Red Piano Gallery to discuss forming an art league on Hilton Head Island. Art League of Hilton Head and the arts community have endured because it was developed by a few individuals out of a love of art and a desire to have a place for artists at all levels of expertise to exhibit, inspire, inform and instruct in a beautiful art gallery and teaching academy setting. They elected Gretchen Ramsey as president and the first “official” meeting was held on May 24, 1972. By 1976, membership had grown to more than 300 people, and in 1979, the organization proudly sponsored its first workshop—a 3-day watercolor course.

The 10th Anniversary of the Art League of Hilton Head was celebrated at the Members Show in October 1982. Artwork was displayed at the Tatler Gallery and a party was held outdoors at the Market Place with nearly 500 people gathering to celebrate the organization’s success.

In March 1984, Art League opened its first gallery in a storefront next to Forsythe Jewelers in Sea Pines Center. Island developer Joe Fraser generously donated $1,500 to get the Art League’s space started. The first newsletter, The Articulate, was mailed out in April 1984 and is still going strong.

In addition to exhibitions, the center featured demonstrations and talks. Workshops were held by Art League starting in 1985, and the children’s workshops began the next year. The League still offers workshops and demonstrations, both in person and on-line, as well as children and adult art classes. In April 1991, Art League Studio, a teaching space for Art League classes and workshops, opened in the DeVries Building on Palmetto Bay Road.

The 20th anniversary celebration of Art League of Hilton Head, with a membership of over 500, was held at the Westin in November 1992. Art League Studio moved from the DeVries building to the Sea Pines Plantation Center in March of 1993. In January of 1994, the Art League Gallery was moved to a new location in the Sea Pines Center. The Self Family Arts Center (now Arts Center of Coastal Carolina) opened in March 1996 with the dedication of the Walter Greer Gallery and an art exhibit of Art League member artists.

In 2000, the Art Gallery again relocated, this time to the northern end of the island at Pineland Station, kicking off its expansion with a week-long series of events and by January 2002, a new website was launched. Later that year, Art League of Hilton Head celebrated its 30th anniversary with a festive party at the Country Club of Hilton Head.

In 2003, Art League opened the Art Academy on Cordillo Parkway offering 23 classes in its first semester. And in 2010, Art League moved its headquarters and Art Gallery mid-island, to the Arts Center of Coastal Carolina, our current location

This month the Art League of Hilton Head is celebrating its 50th Anniversary with a huge gala that will be filled with fun and festivities! With a membership nearing 500, the Gala event will include an evening of dinner and dancing with Deas-Guyz. Everyone is encouraged to attend, so mark October 29 on your calendar, and be sure to purchase a ticket because you won’t want to miss this! Each gala ticket includes a free beer and wine reception hour, followed by dinner. A cash bar will be available, as well.

To join Art League of Hilton Head you can visit www.artleaguehhi.org to learn about our current programs and classes, or better yet, stop by the Gallery to check out the latest exhibit and join in person.