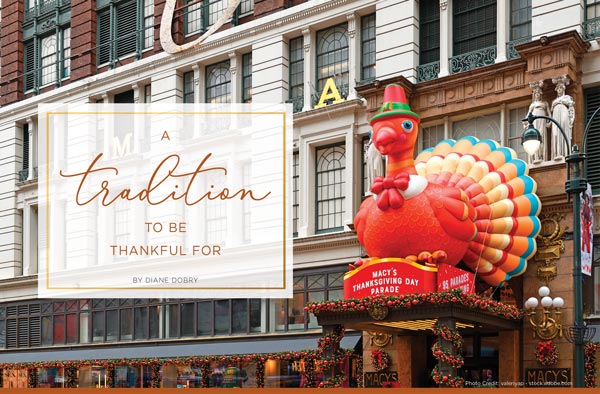 More Than the Food
Thanksgiving is a holiday most people connect to food—turkey, mashed potatoes, dressing (or stuffing), cranberry sauce, yams, green bean casserole, pumpkin or apple pie—ideally shared with a lot of family members around a big table, followed by dessert in a cozy den while watching football games on a big-screen TV.

I think about Thanksgiving along those lines, too, but my favorite memory has little to do with the food. As a kid growing up in the suburbs of Long Island, New York, I ran downstairs on Thanksgiving morning to turn the TV on at precisely 9 o’clock for the annual Macy’s Thanksgiving Day parade. I didn’t want to miss any float, marching band, or giant balloon—cartoon characters like Popeye, Underdog, the Cat in the Hat, as well as a giant turkey—floating high above the streets. I wanted to see what the Rockettes were wearing, and which celebrities on the floats stopped to sing and wave to the crowd in front of Macy’s Herald Square. It could be raining, snowing, windy and cold, or as pleasant as a spring day, and families still lined up on the sidewalks in droves, while some were lucky enough to be standing in the windows of buildings along the parade route on Manhattan’s Upper West Side.

Inspiration to Join the Fun
The parade ended when Santa Claus arrived in a sleigh led by “eight tiny reindeer,” but I got another dose of it by watching the 1947 black-and-white film, Miracle on 34th Street—in which actress Maureen O’Hara played the organizer of the Macy’s Thanksgiving Day Parade looking for a new Santa (played by Edmund Gwenn), because the one she hired had a few too many hot toddies that morning. In an apartment along the parade route, her daughter, played by a young Natalie Wood, watched it from the window. I envied her good fortune to see the balloons passing right outside the window of a warm, dry apartment, and I enjoyed every minute of the hustle and bustle of the holiday season in New York City that the film depicted. I wanted to experience it all for myself, but my parents were not the type to shlep us into the City on a cold November morning, much less a holiday, on a crowded train. I had to wait until I was a parent, myself, to do that.

The Real Deal
That first foray into Manhattan early Thanksgiving morning was in 1996. When working at a local college, I invited a visiting researcher from China to stay overnight and join my family in experiencing the holiday. A co-worker and her son also spent the night, so we could take the train and find our way together. It was bitter cold when we arrived, as we planted ourselves by a guardrail near Columbus Circle, where Broadway met 59th Street, 8th Avenue and Central Park West, the route the parade followed alongside the famous park’s western border. We were a little too far away to see much detail, but we saw the large floats and balloons above the bystanders and heard the drums and horns of school bands marching by. We also caught a glimpse of a New York celebrity, his new young wife, and little daughter—Donald Trump, Marla Maples and Tiffany—walking toward some bleachers after exiting a long black limo. My feet were frozen from standing for more than an hour, but returned to normal as we headed back to Penn Station, boarding a crowded train back to Long Island for turkey dinner at a friend’s house.

A year later, after landing a job at Columbia University, I told my family, “We’re going to the parade, but this time we’re staying in the City.” The Lucerne Hotel on 79th Street and Amsterdam was only a couple of blocks away from 77th Street by the American Museum of Natural History, where the balloons were inflated the night before the parade and where the event began early the next morning. My kids, being young teens, were not thrilled with the plan, but as we walked in the dark, along a crowded Columbus Avenue, we were drawn to the bright lights illuminating giant balloons held down by nets tethered to nearby posts. I was like a child, so excited to see the behind-the-scenes preparations, and I sensed that my anticipation was shared by the many onlookers bundled in winter coats and hats hustling toward the light, anxious to see where the yearly magic begins.

Under those lights, alongside the museum, we found, taking up almost half the block, a giant Spiderman lying prone under a protective “web” of rope as he awaited his cue to take flight. A giant green Kermit the Frog balloon, with limbs outstretched, was secured nearby. With only a few balloons to see, we returned to the hotel and tried to sleep.

The next morning was blustery. There was talk among the bystanders that the balloons might be grounded. But they had to have balloons! It wouldn’t be the Thanksgiving Day parade if there were no balloons.

We crossed Central Park West before everything began, finding a spot between 72nd and 73rd Streets to stand near a low wall bordering the grassy hills of Central Park. Across the street, lucky people watched from windows of tall old buildings. As floats, marchers, bands and balloons started down the street, the swarm of spectators blocked much of the activity at street level, but the inflatable characters seemed noticeably lower than usual to better control them in the wind whipping down the route. Some hit a lamp on the corner as they passed, causing it to shake a little too much. I commented to a British guy near me that the lamp post looked like it could fall on someone. Sadly, less than a half hour later, it did. That was the year someone standing under that lamp was injured when it came crashing down on the people below after a long Cat in the Hat balloon got caught. We didn’t know then what was causing the parade to stop until we saw the report on television.

A decade later, after moving into Manhattan following my divorce, I found myself living alone in a tiny ground-floor apartment of a brownstone close to Central Park West, conveniently located only six blocks north of the Museum of Natural History. The first Thanksgiving morning there, I was up and out the door at 7 a.m., hurrying to the corner of 81st Street on the north side of the museum across from Central Park. I was one of the first to arrive to see golf carts dropping off celebrities, including Dolly Parton, the Jonas Brothers and Wynonna Judd, as they were escorted to their respective floats. Dozens of clowns emerged from the subway stairs behind me, joining marching bands that were lined up ahead of the balloons awaiting the signal that it was their turn to begin the long, winding trek toward 34th Street.

The following year I went down to 77th Street, where the throng of onlookers was bigger and slightly more aggressive. I heard one woman tell someone to go back to bed when they complained that they couldn’t see. It was cold standing in the shade of a building in spite of my expectation that the many bodies surrounding me would generate sufficient heat. The good thing was the distraction of a stage set up on that corner for the television networks, where celebrity news anchor hosts like Al Roker could be seen (and heard) preparing for the big event. Despite the expected discomforts of waiting for one of the biggest parades in the country to get started, it was a great place to observe the organizers and planners shouting instructions, blowing whistles, waving their arms frantically to keep everyone moving as this exhilarating procession was set in motion like clockwork. The collective enjoyment was palpable around me—and that was just the adults! Kids eagerly waited to see what colorful balloon or costume-clad characters would hurry by, waving at them before continuing on to let the next float or band move forward.

That was the last time I watched the parade in person, but another decade later, after moving to Florida, I was excited that NBC and Verizon offered a 360˚ livestream interactive experience of the festivities. I could look up and down the street as if I were right in New York City. I sent a Tweet that supposedly showed up on a screen somewhere in the City, on the video and on Twitter. It was the best of both worlds—enjoying the biggest, best parade in the cold northeast, while wearing shorts and a t-shirt on my screened-in porch overlooking a lake near Orlando. What’s next? A hologram of the parade going through my living room?

Dr. Diane Dobry, a diarist since age 10, teaches journalism and PR master’s students online. As a member of the International Food, Wine and Travel Writers Association (IFWTWA), she is a freelance writer, blogger and podcaster who imported Hungarian wines to the US for three years. A book on Hungarian wine and a memoir of her time in Hungary are in the works. Online she is at GettingHungary.com, on Facebook, and Twitter @gettinghungary. Another website, HungarianAquarian.com, focuses on death and the afterlife. You can email her at This email address is being protected from spambots. You need JavaScript enabled to view it..