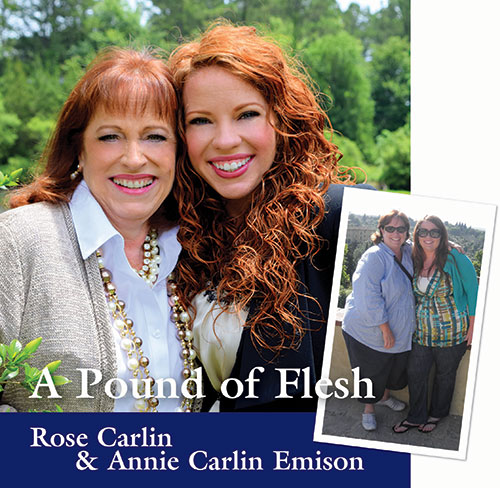 In fact, it’s 250 pounds of flesh. That is the combined weight loss of Rose Carlin (100 pounds) and her daughter Annie Carlin Emison (150 pounds) since this mother-daughter team decided to “change their minds and change their lives.”

Annie, an exuberant, copper-haired twenty-something, greets me at the front door and her ebullient striking mother, Rose, ushers us through the foyer, into the open living area. I am swept into their unified energy field, swiveling my head from one to the other, trying to keep up. I am offered a seat and a tall glass of water. They are both inveterate water drinkers now, having learned at the beginning of their diet odyssey they were severely dehydrated.

Both mother and daughter lean forward in their seats, easily finishing each other’s sentences or allowing the other to complete a thought as the words flow.  Their energy and enthusiasm are measures of their eagerness to share a message of hope and transformation with other people who struggle—not only with weight, but also with the underlying negative self-talk that traps people in what Rose calls, “the lie.”

Rose continues, “For years I listened to that internal voice tell me I was worthless, unlovable, hopeless, on and on. That voice is an enemy. It’s a lie; and it’s the antithesis of God. But I believed the lies.  I just accepted that at 280 pounds and in my late 50s I was too old and too far-gone to lose weight and get healthy, so why bother. It was easier to give up.” Rose clarifies that her sense of “too far gone” hit her when she realized there was nothing bigger than her size 30 pants and the airline seat belt extender was already on its last notch. “Those two facts made me feel completely hopeless.”

Annie’s situation was more acute.  She said, “The lie I believed was that I had no self-discipline.  I went to college as a cute, thin girl.  But instead of the ‘Freshman Fifteen’ I came home at Christmas with the ‘Freshman Fifty.”  When my mom lovingly said, ‘be careful it’s a slippery slope’ I just got furious that she thought I was fat.

“Without really paying attention, I kept using food to make myself feel good.  I had a great career as a celebrity stylist in Las Vegas and LA, I fell in love and got married and I kept eating. When my husband got transferred to Hilton Head it was culture shock. I had lost 50 pounds for a friend’s wedding, but within a short time of arriving in Hilton Head I got so depressed, I put back 61 pounds. “

Her revelation that she was living with a lie came in a specific “aha” moment. She recalls, “I was upstairs reading the bible.  I came to Galatians 5:22-23 that says: But the fruit of the spirit is love, joy, peace, forbearance, kindness, goodness, faithfulness, gentleness and self-control.

I believed I was blessed with the other traits, but I’d been insisting for years I had no self-control. I ran downstairs yelling to my mom, ‘I’ve been calling God a liar by saying I don’t have self-control.  It’s not true.’ I spent the day praying for the strength to exercise my self-discipline and within a week I met a person who introduced me to the Metabolic Research Center. Then I found Dr. Sheila Stephens who helped me with the HCG diet. It wasn’t magically easy, but I found the right people and the strength (and self-control) to commit to a serious life change.”

Six months later Rose got on board with the program. She also started on the HCG diet with Dr. Stephens. She was forced to change her lifestyle.  She had to quit being the “feeder” and learn that cooking and offering quantities of food wasn’t the only way to love people and feel valuable. She had to learn to deal with life’s inevitable disappointments without using food to self-medicate.

For Annie and Rose their goal is to replace the self-defeating lies with the truth of hope and belief in themselves and God.  The consequence of their success is their sense of mission to share their story and offer hope to others. They each have a mantra they repeat as often as required:  For Annie it’s “Nothing tastes as good as skinny feels.” She calls it her “thinspiration.” For Rose it’s a modification of Kerrie Robert’s "No Matter What" lyrics. Sometimes jubilant, sometimes whining, Rose sings, “No matter what I’m gonna love me.”  They admit it’s a daily—sometimes minute-by-minute—exercise in choice.  But they are now choosing to love who they are.  That’s the truth.

Celebration: They wanted to release 250 balloons on Mother’s day, but were told it’s ecologically unsafe.  Instead, Annie wants to stand in a sexy size six dress beside a life-size “before” picture.

Cheerleaders: Annie says her mom—formerly a music teacher—gave up piano for pompoms in her new career as motivational speaker and author.

Health benefits: Rose, who suffered severe gastro-intestinal illnesses and took 7 prescriptions, is now healthy and prescription free; Annie is off anti-depressants and happier than she’s ever been.