And a Cool $1,000,000 for Life-saving Treatments & Early Detection for Lowcountry Women 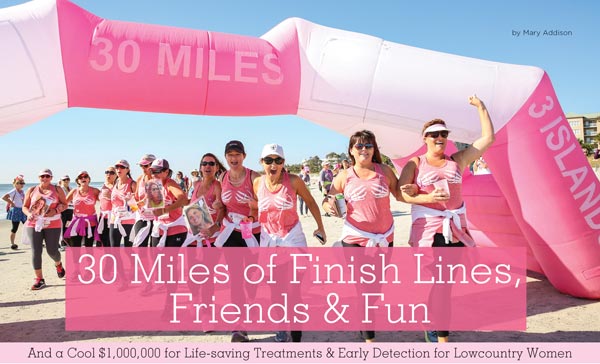 The cause might be part of the reason why the Lowcountry turns a sea of pink every October, but it's the four days of sun, shenanigans, and sisterhood that keep 1500 “flockstars” coming back year after year.

If you have only seen the scores of photos of smiling faces, you might think that Pledge the Pink is merely a 4-day party. You wouldn’t be wrong, but you also wouldn’t be entirely accurate in your assessment. Make no mistake, Pledge the Pink is very much a celebration, so go ahead and save the date—October 14-17, 2021.

After all, what else can you call a gathering of people from 46 states and 21 countries who make their way to the Lowcountry, pick out their most outrageous pink outfits and walk together to the cheers of a throng of supporters? What else could you call an event that includes “Drag Queen Bingo'' as one of its side events? How could you possibly describe an event that set a Guinness World Record for the most lawn flamingos in one place as anything other than a heck of a good time?

Yes, Pledge the Pink is possibly the greatest party the Island has ever seen. But there’s so much more to it than that. Witness the breast cancer survivors who lead each day's event, hear their stories of endurance in the face of overwhelming odds, and you’ll get a sense of Pledge the Pink’s grander meaning. See the faces of women whose lives were saved by the funds raised by this event, note the memorials for those who have Pledged the Pink in years past, and you’ll understand. Not only is there laughter and jubilation, but there is also a deep wellspring of love, hope and compassion.

There’s a framed letter you’ll notice on the desk of Laura Morgan’s Bluffton office, enjoying a spot of pride since it first arrived in her mailbox 11 years ago. In simple crayon-scribed script, and with the purity of heart every child seems to share, it reads simply: “Please help my mommy.” Enclosed were three wrinkled dollar bills and a note from the child’s father. The three dollars came from the child’s tooth fairy savings and were given in the hopes they might help those afflicted with breast cancer. As the note explained, this gift was deeply personal to the young philanthropist, whose own mother had been diagnosed with Stage IV breast cancer. “I keep that on my desk to remind me of our WHY,” said Laura. “This little kid was already facing something no child should have to, and yet her first instinct was to help.”

It’s an instinct Laura knows too well. As founder of Pledge the Pink, she has nurtured this annual breast cancer fundraiser from a small gathering of like-minded friends to an international event, with participants traveling from as far as England and Switzerland. Since that first endowment from the Tooth Fairy, Pledge the Pink has raised nearly $2,000,000 for life-saving treatments and early detection for women across the Lowcountry.

On paper, the event is three days of semi-competitive running and walking through gorgeous resorts and beaches. But at its heart, Pledge the Pink is about more than just earning bling at the finish lines: It’s about sisterhood. “One of the greatest aspects of Pledge the Pink is this bond that forms between the people who join us every year,” said Laura. “It’s almost like being in a secret club with 1499 new besties from around the world.” These friendships endure long after the weekend is up, with participants engaging in year-round discussions on Facebook groups, email chains, monthly Zoom calls and road trips to meet up in their home states.

Whether it’s grief or hope that brings them together, there’s nothing but pure joy in the air come event weekend. Strangers become lifetime friends and unbreakable bonds are formed. “We were a local event in the early years, but now we have more participants from California than we do from Hilton Head, but we’re hoping that will change. We rolled out the welcome mat to all 50 states and 23 countries year before last,” said Laura. “It’s always been my hope to use Pledge the Pink as an economic generator for the community, but we really want the locals to join in and see what they’ve been missing these last several years. It’s a whole different ball game.”

This year’s Pledge the Pink will be centered at Shelter Cove Park and will feature three different 10-mile courses through Port Royal, Palmetto Dunes, Shipyard, North Forest Beach and Singleton Beach communities. After you’ve earned your daily medal, the party cranks up at the finish lines and the real shenanigans begin. In between all the fun they’re having, they are also on a mission to raise a cool one million dollars this year alone, the vast majority of which stays in the Lowcountry!

If you want to be part of the “three-day, 30-mile, beach-hopping, memory-making, cancer-kicking, bling-earning, laugh-until-you-pee, adventure of a lifetime,” visit pledgethepink.com. Use coupon code PINK50 to save $50 on registration when you sign up before June 30.

Up Close:
> When: October 14-17, 2021
> Go to pledgethepink.com to register, volunteer, or become a sponsor
> There are less-than 200 registration spots still available;
use coupon code PINK50 to save $50 through June 30.
> Over 400 volunteers are needed to bring Pledge the Pink to life. Join the fun without blisters!
> Sponsorships ranging from $500 to $25,000 are still available!