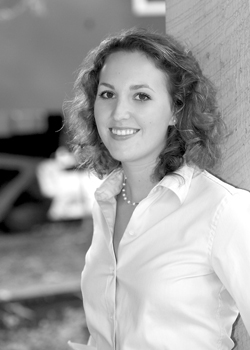 Tori Spearman is a young woman who has her head on her shoulders. She knows where she's from (the Lowcountry) and she knows where she's headed (the Lowcountry). Born and raised in Beaufort, she's not afraid to admit that she loves it here.
"Most young people can't wait to get out of a small town," she said. "But the farthest I'd ever want to go is Charleston."
Like any good Beaufortonian, Tori was raised on the water. She loves surfing, spending time at the beach on Hunting Island, and going out in the boat with her family. Beyond that, there are so many activities which Tori enjoys and at which she excels, she is truly what you would call a well-rounded person. Her rigorous academic schedule gives way to afternoons practicing the sports she loves, especially soccer; and her weekends are filled with volunteer activities in the community. On top of it all, she works part-time at What's in Store on St. Helena Island.
"I've really tried to be a good role model this year," said Tori, a senior at Beaufort Academy. "I want to set a good example, first for my sister and then for the younger girls at school."
Tori has taken on leadership positions in groups such as SADD (Students Against Destructive Decisions) and Interact, a community service club. She recently won the Good Citizenship award through the Thomas Heyward chapter of DAR, which honors a student who displays the qualities of dependability, service, leadership and patriotism. She has been on the Honor Roll since the ninth grade and was ranked as a National AP Scholar with Honor for 2007. But she insists that being at the top of her class isn't what it's all about; the important thing is being able to help other students. She prides herself on being a mentor, something she came to value when she was in middle school and an older girl befriended her.
"She didn't treat me like I was younger," Tori recalls. "She always tried to treat me like I was her same age, and she was very positive. I don't think I ever heard a negative word come out of her mouth, and that really inspired me. I thought, if I can do that for a younger girl, I'll be doing the right thing."
Perhaps one of Tori's most outstanding accomplishments was taking second place in a national essay contest sponsored by the Philosophy Slam Organization. When asked to respond to the theme of "Violence vs. Compassion," Tori found that she had some strong feelings on the subject.
"I believe that compassion is stronger than violence," she said. "It was hard to see that the person who beat me for first place was a guy from Virginia who wrote that violence was stronger. I think that compassion is what's remembered, and I look at examples like Dr. Martin Luther King and Ghandi. I believe that violence isn't always the answer, and so I try to find the good in people."
Whether it's in the halls of her school, on a volunteer mission in Beaufort, or out in the Lowcountry at large, Tori shines as a beacon of hard-working optimism.
"I like to stay positive," she said. "A lot of people know me for being the smiling, bubbly person on campus. But I love the fact that I can help other people smile."

Profile
Hometown: Beaufort Has traveled to: Australia to dive the Great Barrier Reef, Mexico for scuba diving, and England where she received a scholarship to attend a summer program at Oxford in 2005 Willing admission: "I'm a Southern Belle through and through." What makes a southern belle: manners, closeness to family, involvement in the community, and classiness in appearance and behavior When she's 84: hopes to be one of those elderly ladies that still wear big pearl earrings and a big smile