With Heart and Soul 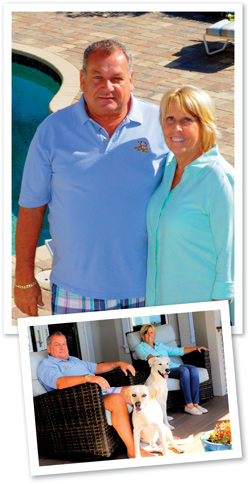 “We rise by lifting others.” —Robert Ingersoll

We never know how deep is the river of the heart. Important is the fact it is filled with compassion, which rises up and engulfs those fortunate enough to be near.
When Ed and Susan Forbes finished renovating their magnificent, waterfront home, they knew it was meant to be shared. “Not particularly party people, we looked for a volunteer organization to help,” said Susan. “We were introduced to Kathy Cramer, Director of SOAR for Beaufort County. After our meeting, Ed, a strong supporter of St Jude’s, and I discussed it and felt we found our niche. We held our first party for the special needs group last December,” Susan said. “A DJ enlivened the party, and SOAR members from teenagers to age 65 danced, sang and enjoyed a fun evening.”

SOAR’s mission is: “To enhance the lives of individuals with disabilities by providing Special Olympics sports and recreation, as well as programs, which facilitate social interaction. We believe everyone in our community deserves the opportunity to engage in a healthy, active lifestyle.”

Besides offering helping hearts to humans, Ed and Susan have also provided a loving home for lots of fun-loving dogs. As I pulled into their driveway, white labs, Luke and Marley happily greeted me and escorted me into their breathtaking home. Having accomplished their goal, the two settled next to us on the fabulous oceanfront porch. Soaking up the view, Susan quietly reflected on her life’s journey.

“I was about 14 when I began acting as a fixer for my siblings and their friends. Growing up, my mom always fainted at the sight of a little cut. She instructed us to go to our nurse neighbor if we had any blood on us! So when I was old enough, I became the one the kids sought out with their cuts and bruises. Guess even then, I wanted to be a nurse,” said Susan.

After nursing school Susan married and later, when her 20-year marriage broke up, moved to Georgia. She raised her two children and enjoyed a 33-year nursing career. Several single years later, Ed came into her life. “I know God put us together, as we share so many similar interests.” They met on Hilton Head in 2012, married in 2013, and have blessed many lives with the monthly themed-parties they give for SOAR. The Forbes have hosted movie parties, pizza parties and the never-to-be-forgotten Spooky Sparkleberry Halloween party.

“Since Ed still owns an engineered metals business in Columbia, SC, he cannot be here during the planning stages of the parties. I remember the first one, when the group arrived before Kathy Cramer. In new territory, Ed was a bit uneasy. After only a moment’s hesitation, he rushed out to greet the small group of strangers with his genuine, welcoming smile,” said Susan, “he quickly bonded. He and the kids washed cars together during the summer,” she smiled. As a Marine business owner of the largest producer in the country of T-tops and towers for all types of boats, Ed declares, “Being involved with the SOAR group is most humbling and serves as an inspiration to me in handling the negativity that crops up in the business world. There is always a positive outcome when I talk with my 135 employees about these amazing people and their shared thankfulness for every day. What a wonderful example they give us, and life is too short to complain. Upon retiring, I plan to start a trade school for special needs groups to help them along their way.”

Kathy Cramer gratefully declared, “We have enjoyed so many wonderful evenings of fellowship and fun with Ed and Susan. They even opened their pool and hired a lifeguard for our teenage special needs camp to have a swim day! We are excited about our second Christmas party. Not many would open their homes like this, and we love and appreciate all they are doing.”

Susan and Ed say, “Our lives have been touched by this group. They are empowering, and we have learned far more than we have given. They make us want to be even more involved.”

Numbers are fun: Birthdays and many special occasions all seem to happen on the 21st in the Forbes family

Dance time: Susan and Ed want to learn to shag

Amazing Journey: In the ‘80s, Ed sailed from South Africa to the USA on a 55-foot boat he helped to construct. “I’d do it again tomorrow!”

Unforgettable attitude: “I just never thought I wouldn’t come through it.” said Susan about surviving artificial valve surgery and two serious bouts with cancer while nursing, teaching and raising her two children. “Attitude is everything!”

Inspiration: 14-year-old, wheel chair bound Hannah, who can only communicate by blinking for yes and no. “She wanted a hot dog, watermelon party this summer,” said Susan. “Everyone helped her make it happen. Hannah's true goal is to become an event planner!