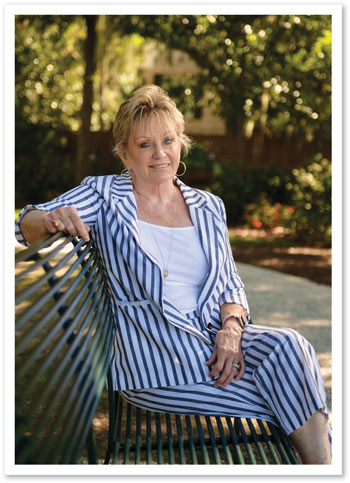 “You gain strength, courage and confidence by every experience in which you really stop to look fear in the face….You must do the thing you think you cannot do.” —Eleanor Roosevelt

Susan Bailey simply exudes a joie de vivre with her positive attitude, zeal for life and confidence. Her blue eyes shimmer over an engaging smile, and she has a genuine interest in learning about the people with whom she interacts. Susan has been a realtor for over 35 years and clearly loves helping clients find their dream homes.

She was an Army brat who was accidentally born in Texas and grew up in North Carolina, where she went to both high school and college. She earned a Master’s degree in behavioral modification but only worked in the field of psychology for a brief period, However, it has served her well, especially over the last 23 years.

In 1999, Susan felt a small lump in her breast and had a mammogram. The doctor said there were three cysts and recommended another mammogram in six months. Susan remembered watching the “Today Show” and hearing women tell their stories about being diagnosed with breast cancer. Their messages emphasized early detection and raised her awareness about being your own best medical advocate, so she insisted on a needle biopsy. The end result was that she had stage four breast cancer, which was HER2 positive, a more aggressive cancer. And it had already spread to her liver and bones.

“You have to be proactive,” Susan said. “Even specialists tell women who feel they have a problem not to worry about it. If a doctor says don’t worry about it, don’t listen. If you don’t get it checked out, how will you feel if the problem is serious?”

“I’m not a cancer survivor; I will always be a cancer patient. I haven’t beat cancer, but I have beat the odds. The prognosis is that 28 percent of cancer patients will live over five years. I will be on and off chemo for the rest of my life. But I am here, and I’m very lucky because I’ve had no chemo since 2000.”

Susan was single, working full-time and living in Austin, Texas, when she got her diagnosis. “I thought I can do anything for six months, but my treatments went on for over a year. My goal is to live six months at a time.” Susan has brittle, weak bones—a side effect of one of the drugs. She has also had multiple reconstructive surgeries.

Despite all of this, she said, “If I had a blank book and could rewrite my life, I wouldn’t take the cancer out. It gave me more than it took away. It gave me the will to be positive, strong and independent, an appreciation of life and perspective. No one can give you perspective, you must live to get it. I learned that if you want to do something, just do it. And I learned that when bad things happen, I can go through anything. I don’t sweat the small stuff.”

“I never asked ‘Why me?’ One in eight women get breast cancer. But I still ask, ‘Why am I the chosen one who gets to live?’ There must be some deeper meaning to my life that I have yet to discover. It didn’t seem fair that I lived, so I learned survivor skills to deal with survivor guilt.”

Susan said her doctor told her it was nice to have one success story out of 1,000, that she is a miracle. “I eat healthy, exercise and have a positive attitude. I believe in a positive attitude. Every day in the shower I recite my positive affirmations. And every day I write what I am grateful for in my gratitude journal.”
Up Close:

On the Move: Growing up in North Carolina, Susan’s family often vacationed on Edisto Island (SC), and Susan fell in love with the Lowcountry. She lived on Hilton Head 40 years ago for a brief period before returning to Texas. After her cancer treatment, she made up her mind to move to Hilton Head and drove alone from Texas.

Playing a round: Susan plays golf, even though she claims she’s not very good at it. She enjoys the support and camaraderie of friends.