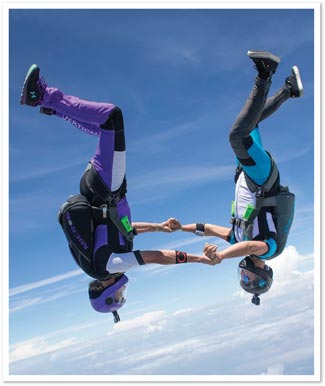 When most of us think of skydiving, we consider it a once-in-a-lifetime experience. But for this mother-daughter daredevil duo, it’s commonplace, a hobby like any other. Where some people craft or birdwatch, they throw themselves out of moving aircraft. Since their first skydives about a decade ago, Sue and Brooke have done 950 and 850 jumps, respectively. They even have their own official team name, “Carolina Blonde.”

“It wasn’t on or off the bucket list,” says Sue, a Bluffton resident who did her first tandem skydive in Aruba in 2010. “I just got a wild hair and signed up. Was I scared? Yes. But once I got out of the aircraft it was an unbelievable rush—there are no words to describe it.”
Her daughter Brooke, 15 at the time, began to take an interest despite being underage (you have to be 18 to legally skydive in the U.S.) “Every weekend they’d all be drinking wine and we’d be watching the tandem videos again,” recalled Brooke, “because it’s the most amazing thing if you’ve never done it.” Within a year they were back in Aruba, where there’s no age restriction and the instructor asked Brooke what she was waiting for. Suddenly she was on the plane with no time to process her fear, and after completing the jump, she knew immediately she wanted to get licensed.

Today both women have earned their skydiving “D licenses,” the highest in a tiered system starting at A. That means completing a minimum of 500 jumps, 3 hours of free-fall time, and two night jumps with free-falls of at least 20 second durations. They have trained in wind tunnels, attended camps to learn advanced skills, and participated in a women’s jump in group formation that set a South Carolina record. Sue even had a “cutaway,” meaning her main parachute malfunctioned and her reserve deployed. (No, her life did not flash before her eyes.) 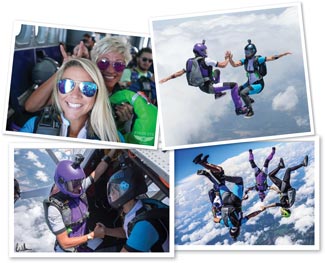 “It’s one of those sports that you can never stop learning, like golf,” said Brooke, who now lives and works in Nashville. “There’s always something you can better yourself at, whether you want to compete, set records, practice new ways to fly your body, work on canopy skills, or be one of the people who jumps into stadiums. The opportunities are pretty much endless, and it’s always evolving.”

Skydivers come from all walks of life, said Sue, although many of the most seasoned ones began in the military. They were primarily “static line jumpers,” meaning they executed low-altitude flights and their parachutes deployed immediately with no free-falls or fancy tricks. That was all business, but today the sport is about having fun and keeping each other safe.

“One cool thing is that we are such a close-knit community,” said Brooke, who’s proud to contend in a male-dominated world where just 13 percent of about 40,000 licensed skydivers are women. “We have a lot of very well-known, decorated athletes, but you could walk right up to them on the drop zone and say ‘Hey, I’m Brooke, can I jump with you?’ and they’d be like ‘Hell yeah!’”

That same camaraderie has had a profound effect on the mother-daughter bond between these two besties, who FaceTime every day in addition to calls and texts. “Brooke started to skydive at an age when most mothers and daughters are facing some of the most difficult relationship times,” said Sue. “We had the normal butting heads, but nothing horrible, and we can both say for sure that skydiving brought us closer together than we could ever imagine. The relationship we have now is so completely special because of skydiving.”

Up Close:
Careers: Brooke is a sales rep for 3M, Sue sells commercial park and playground equipment
Other hobbies: golf, dogs, water sports, travel, food and wine
Mother-daughter skydiving bucket list: Dubai (over the Palm), Egypt (over the pyramids) and NY (over Niagara Falls)
15-minutes of fame: Sue was surprised to see herself on the foldout cover of the 75-year anniversary edition of Parachutist Magazine (poor Brooke was cropped out)
Why they can skydive despite fear of heights: At 2.5 miles up, your brain doesn’t register it as “heights.”
Why everyone needs to do it at least once in their lifetime: The feeling is indescribable, and there’s no excuse because you have a greater chance of dying in a car accident than on a tandem skydive.