Half of Double Trouble 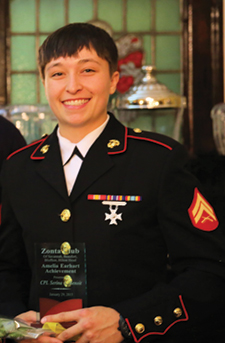 Tall, slim 20-year-old Lake Charles, La., native Serina Benoit has energy and a smile that lights up a room.
Now stationed at the Beaufort Marine Corps Air Station, she had other options in life. Instead, she chose the road less traveled, followed her childhood dream and became a U.S. Marine.
Serina’s desire to serve others seems hereditary. Her mom is a police dispatcher and her dad was a soldier in Desert Storm and is now a project manager for the Lake Charles water system. Her cousins were in the Marines and Army and one of her three sisters will soon join the Lake Charles Sherriff’s Office.
“My twin sister and I played basketball together in school,” Serina remembered.  One sister is older, one younger and the twin she counts as a tie.  “They called us ‘Double Trouble’ or the ‘Twin Towers’ because we were tall for our age.”
Basketball was her favorite sport and the draw to get a scholarship was strong.  “My mom wanted me to go to college,” Serina said.  “But as soon as I graduated from high school, I joined the Marine Corps. Dad was all for it.  But now, Mom is my biggest supporter.”
She left on Nov. 13, 2012, for 13 weeks of fabled training at Marine Corps Recruit Depot on Parris Island, the only place women are trained to be Marines.  “I was ready for boot camp; the Crucible, not so much,” she said.
The Crucible is a culminating event that all recruits must pass in order to earn their eagle, globe and anchor insignia.  A grueling 54 hours of nearly non-stop action, little sleep and much exertion as they are tested physically and emotionally.  At the end, if successful, their drill instructor hands them their insignia and calls them a Marine for the first time.
“My hands were so cold I couldn’t grip things; it got so cold I didn’t want to move, but I knew I had to finish,” Serina said, completing the crucible in February.  “It was one of the hardest things I’ve ever done.”
“I had long hair before I went in.  When I went home my old friends and even my own sisters would say, ‘Whoa, what happened to you,’ because I looked and acted so differently. Before, I was a chatterbox, but after boot camp I was quiet and watchful.  I remember my family went to Buffalo Wild Wings after graduation and when we were eating, my mother leaned over to my dad and said, ‘What’s wrong with her?’”
Support from her family is evident; it took three vans to carry them to Beaufort for her graduation. Serina has done well in the Corps. After boot camp she earned the rank of lance corporal, meritoriously and was recently promoted to corporal.  This is excellent advancement in her field, which is aviation ordnance.
“I went in to be a pilot and fly F-18s,” she said, acknowledging that she knew that wasn’t possible without a college degree.  Now, Serina works on systems that launch weapons from aircraft. But flying still is an attainable goal with Marine Corps programs that send select enlisted Marines back to college to finish their degree and become an officer.
Serina has adapted well to Marine Corps life.  “I love it,” said Serina, who is halfway through her first enlistment and hoping to become a drill instructor.  “I would really love to re-enlist.” However, with reduction in forces and a new, more restrictive system it’s not given that a good Marine will be able to stay.
Others have acknowledged Serina’s potential.  The Savannah branch of Zonta International awarded her the Amelia Earhart Award in January, which recognizes women’s achievements in aviation.  Since 1919, Zonta has grown to be a worldwide organization of business and professional executives, who advance the status of women. The award came as a complete surprise to Serina.
“I first heard about it when my gunnery sergeant asked me to write a bio on myself and I asked why and he told me.  I was amazed to find that my master sergeant had put me in for it.  I am just honored that someone would think enough of me to do something like that.”

Who influenced you most in life?  My family, we have a very close extended family.

What is the hardest thing you’ve ever done in your life?  Looking out for my twin sister and nephew. We were adopted by the same family and they looked to me for strength.

What did you enjoy most growing up in Lake Charles?  The water, I love swimming and fishing and just being in the country.